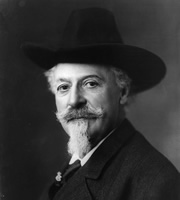 - The panel are asked to draw a wigwam. However, each panel mistakenly draw a tepee instead, except for Clive who draws George Michael and Andrew Ridgley of the band Wham! wearing wigs. ("Wamwig")

- "Bottomry" is a type of insurance taken out on a ship (known as "Bottoms" in marine commerce).

- Buffalo Bill did nothing with buffalo because all the supposed buffalo in the USA are actually bison.

- Tangent: "Flobbadob" the language used by Bill and Ben was named after the noise made by Brabban's brothers farting in the bath. Correction: This is an urban myth that first appeared in a newspaper article. Their language is ""Oddle Poddle". "Flobbadob" means "Flowerpot" in Oddle Poddle. (See Series D)

- The connection between Billy the Kid and Ben-Hur is Lew Wallace. Wallace wrote the novel Ben-Hur and also wrote Billy the Kid's death warrant whilst he was Governor of New Mexico.

- Luvvie Alarm: When John Sessions was talking to Robert Redford at the Sundance Film Festival, Redford told him that The Sundance Kid was Welsh.

- As you go upstairs, the thoughts in your head go faster.

- The best floor to throw a cat out of is the fifth, if you want to harm it.

- The commonest material in the world is perovskite. (Forfeit: Oxygen; Water)

- In 63 AD, Pompeii was destroyed by an earthquake.

- Roman emperors ordered the death of a gladiator by sticking their thumbs up. (Forfeit: Thumbs down)

- The organisation the Americans fought in Vietnam was the Viet Minh. (Forfeit: Viet Cong)

- Tangent: In Denmark, King Kong is known as Kong King. Correction: This fact is a myth, although is true that the Danish for "King" is "Kong".