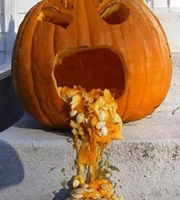 - The set is 'in mourning', with everyone dressed in black, a coffin in the middle of the set, and the forfeits on the screens written in green as apposed to white.

- The Black Death was originally spread by marmots.

- Tangent: Stephen argues that you are better suffering from manic depression ("Bipolar disorder" - Which he himself suffers from) than normal depression ("Unipolar depression") because you have the advantage of states of joy. Depressed people tend not to mind what you call the condition. K. Redfield Jameson, author of "An Unquiet Mind" calls it "Depression" and sometimes "Madness".

- Tangent: One depressed man took apart a car engine and labelled each part. Then he got the mood swing and threw everything away, so he ended up with no car engine.

- Tangent: Swimming with dolphins can help depression. However, sometimes the dolphins hurt the person because they become too interested in the person.

- The saddest song in history is "Gloomy Sunday" sung by Billie Holiday - a.k.a. the "Hungarian Suicide Song". Written by Rezso Seress, he suggested to his girlfriend that they should get married after he finished writing it. The next day, she poisoned herself leaving a suicide note reading "Gloomy Sunday", which is where the title comes from. Several suicides are attributed to the song. The BBC banned the song until 2002. (Correct answer given by the audience)

- Tangent: Monday is supposedly the most depressing day of the week.

- Tangent: Sean talks about two sentinels he met at Beachy Head, who tried to stop people from committing suicide. They only met once a week, for an hour.

- Tangent: Out of the 3,500 mushrooms native to Britain, only 100 are poisonous and just 15 are lethal. The last death in Britain by mushroom was many years ago. Correction: The last death-by-mushroom in Britain happened in 2008, where a woman in her 20s on the Isle of Wight died by eating death cap mushrooms.

- The only things that live in the Dead Sea (the lowest place on Earth) are extremophiles.

- Tangent: It is possible to drown in the Dead Sea. If you turn over the wrong way, it is difficult to turn back around.

- Tangent: Out of the 250 drownings in the UK, a third are intentional.

- Lemmings do not commit suicide by throwing themselves off cliffs. This is a myth that first appears in a children's encyclopaedia in 1908. (Forfeit: Myth invented by Disney) Correction from Series A - Episode 1.

- There is no curse of Tutankhamen. (Forfeit: Death to all who enter here)

- Only five people died in the Great Fire of London. They were the maid of the baker who started the fire, a shoe-lathe and watchmaker, an old man who tried to rescue some blankets from St. Paul's but died of the smoke, and two men who tried to rescue their goods from their houses. The Mayor of London, Thomas Bloodworth, went to bed on the first night saying, "A woman might piss it out." Correction: It is now believed that many more people died during the Great Fire, but deaths went unrecorded.

- Edward de Bono, the inventor of lateral thinking, suggested sending Marmite in order to solve the Middle-East conflict. The claimed that a lot of unleavened bread was eaten there. In unleavened bread there is a shortage of zinc. A lack of zinc caused aggression, but Marmite contains lots of zinc. He suggested this idea to the Foreign Office.

For info on the mushroom correction, see the QI Quibble Blog.