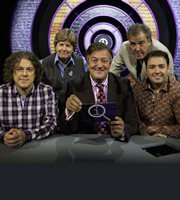 - Chainsaws were originally invented for cutting a woman's pelvis if she was having difficulty giving birth. In 1783 Scottish doctors John Aitken and James Jeffrey would perform a "symphysiotomy", a procedure to widen the pelvis if the baby's head as too large to pass through, using a device called an "osteotome". The chain used was like a watch chain. This device was later used to remove other parts of diseased bone, for example in the arm, which would result in it becoming stiff. The chainsaw that we are now used to, for cutting down trees, was invented in 1920.

- Tangent: When Jason's wife was pregnant they went to see an obstetrician, Jason had to sit on a chair while the obstetrician pulled a curtain so he could not see him examining his wife. Jason complain saying that he has seen that part of his wife before.

- An electric jock strap works by stimulating the genitalia. It was a Victorian sexual aid. Adverts for the Heidelberg electric belt in the back of newspapers which contained code phrases like "Nervous and general debility, lost vigour, decline, and the whole train of gloomy attendants," which referenced impotence. The adverts also advised "seminal economy" and "wantonly jettisoning too much nervous substance." The adverts also gave a 10 days free trial, so might end up with a used one.

- XL: Other than for reasons of cleanliness there is little reason why to wear your underpants inside-out. If you are left-handed (like Jason is) you may want to put on your Y-fronts inside-out so the fly would be on the left-hand side, but due to the topology it does not quite work like that and the fly remains of the right-hand side. Y-fronts originally began as X-fronts. They were reasonably successful, but then American Arthur Kneibler made them Y-shaped, called the "jockey shorts", and they became an instant hit.

- XL Tangent: Jeremy worked with a cameraman who reckoned he could get five days of wear from a pair of underpants. Jeremy also has a photo of David Walliams in pair of Y-fronts with two flies.

- XL Tangent: Stephen says that due to the "downstairs" nature of the show that this episode has gone as low as it could possible go, but he does not help when he promises that the tone will rise.

- XL: Dubious theory - Urotherapy is the practice of drinking your own urine for the benefit of your health. People who practice it believe it can cure everything, from cancer to the common cold. It can also boost the libido and act as a way of pepping you up. The theory, as described by Martha Christy in her book You Own Perfect Medicine, "The very first toilet visit of the day is the most beneficial ... with five drops of fresh morning urine under the tongue, before gradually increasing the dosage to as much as a cupful morning and night." Famous practitioners include the actress Sarah Miles, novelist J. D. Salinger, Indian Prime Minister Morarji Desai (who we elected at the age of 80) and Eddie Monsoon in Absolutely Fabulous. Those who attack the idea say that as your drink the urine it becomes more concentrated. For more information see drinkmyurine.co.uk.

- XL Tangent: Sandi was once sent a "she-wee" by a member of the public, which is a device to allow women to stand up when urinating. Jeremy claims that driving under the influence or needing a wee is the most dangerous thing a human can do.

- The thing your great-grandmother was doing down the back of the sofa was disguising herself while they babies and children were photographed. As the exposure for photos was 10 seconds long during the Victorian period, in order to keep the baby still their mother would whole them. But as only the child was meant to be in the photo the mother hid themselves, but pretending they looked like a sofa or another item of furniture. These are called "hidden mother photographs" which today look rather frightening.

- XL Tangent: Even more disturbing than hidden mother photographs were ones taken in Victorian times of dead babies, made to look like they were asleep. They also used to turn the hair of dead people into jewellery. Our generation is probably the first in which most people have not seen a dead body. Stephen once went to a "body farm" in Tennessee which has lots of donated dead bodies in it which are used for police and pathology training.

- XL Tangent: There was once an auction in a Scottish castle where it was discovered that a dead body was being used as a hat-stand. It was discovered that during World War One the lord of the castle was an officer supposedly had a relationship with his batman, who was killed by a German. The lord was so enraged that he crossed the trenches, killed the German, dragged the German's body across No Man's Land, into the British trenches, sent the body back home and ordered that the German should be stuffed and used as a hat-stand.

- Tangent: Possibly the first every photographed humans were a French boot boy and a customer, photographed by Louis Daguerre in 1838. It was a long distance landscape in which due to the 10 minute exposure most people come out blurred, but because these two were standing still, they came out.

- Tangent: The panel are shown a photograph of someone born in the 18th century - an elderly Duke of Wellington.

- The interesting thing you can do with a slinky is if you let the bottom half drop first while holding the top, and then you let go of the top half, the bottom half will stay still until the top half hits it, even in mid-air. It was invented by accident by naval officer Richard James, who knocked over a coiled spring and noticed it going for a walk, although it was James's wife who thought it would be a good toy. Over 300 million have been sold.

- Jerries are better than flimsies because World War II the British filmsy can leaked and was hopeless at transporting petrol, unlike the German jerry can which was a remarkable piece of design. General Auchinleck, the predecessor to Montgomery in the Eighth Army said: "The filmsy leaked 30% of its fuel between base and consumer, with huge consequences in lost lives, battles and shipping." During the war, British soldiers were constantly trying to steal the jerry cans to such an extended that the Germans started booby-trapping them. The jerry can is constructed with a single weld with a special cap and an inner lining which allows it to carry either petrol or water. When the can opens a thing nicknamed a "donkey dick" comes out which is a flexible fuel spout. Indentations pressed into the side of the can give it extra strength and allows it to expand in the heat. The handles are specially designed so you can carry two cans at once and allow it to be easily pass one can to another person without putting the other one down. They also floated. By the end of the war however the British had produced 21 million of their own jerry cans. US President Roosevelt said, "Without these cans, it would have been impossible for our armies to cut their way across France at a lightning speed which exceeded even the German blitzkrieg of 1940."

- XL: One everyday object that was invented in a jail was the toothbrush. They were invented by William Addis in 1780 who was imprisoned for rioting. In jail he was expected to clean his teeth using a rag and soot scrapped off the back of a chimney. After deciding a scaled down broom would be better, so he got some bones from his food which he drilled little holes in it, then blagged some horse hair from a warden. When he got out of jail he marketed the toothbrush at the same time sugar was arriving from the West Indies.

- XL Tangent: The composer and suffragette Dame Ethel Smyth, who wrote "The March of the Women", was also arrested for rioting. When she was in Holloway suffragettes would support her by singing the song outside her prison window while Dame Ethel conducted the crowd using a toothbrush as a baton.

- There are several candidates for the least promising invention in history, most of which have been useful indeed. These include:

- The shopping trolley: Invented by Sylvan Goldberg, at first men thought it looked effeminate and women thought it insulting to their ability to carry a basket, so after he invented it in 1938 for two years Goldberg hired people to wander around supermarkets pushing the trollies so people got used to the sight of them. He died in 1984 and had a fortune worth $400,000,000.

- Bubble gum: Invented in 1906 by Frank Fleer, he called it "Blibber-Blubber". However, his recipe meant that once the bubble had burst you had to use turpentine to get the gum off your face, which is toxic.

- Tangent: Jeremy claims that it is just about impossible to remove gum from your iPhone screen, although Alan claims there must be an app.

- Windscreen wipers: Mary Anderson in 1903 invented it, but as cars were not common at that time she made little money from it. By the time cars were popular enough to use wipers, her patent had expired. Similarly, Dorothy Levitt invented the rear-view mirror, but there was no patent for it at the time.

- XL: You know when they used to have men waving red flags in front of cars? Sorry, it is a complete myth. The Red Flag Act of 1865 originally covered steam-powered vehicles like traction engines and steam buses. It required men known as "stalkers" to walk 60 yards in front of the vehicle. It lasted until 1878, where until 1896 it was simply optional. After 1896 the act was abolished, at which point there was no more than 80 cars in the country. (Forfeit: Yes)

- Dry-ear Ear Dryer: An invention that really is unpromising. The advertising for the product says: "Drying your ears has never been simpler or more effective. The device blows hot air into your ear." However the instructions advise you to dry your ears with a towel first.

- XL Tangent: Jason claims to have invented things that were already invented. For example when he was a kid he thought of inventing the bike when he spotted an unicyclist and thought of adding another wheel to the back of it. At school he also thought he had invented glasses.

- The problem with the first sound recording device was that you could not play the sound back. A Frenchman called Martinville used burnt soot to register sound waves in 1860, 17 years before Thomas Edison recorded sound. However it has since been reverse engineered and we can now here the sound Martinville recorded, which was of him singing "Au Clair de la Lune". When the news was announced by Charlotte Green on BBC Radio 4, after she heard the song she could not stop corpsing as she read the next news item, about the death of film producer and screenwriter Abby Mann.

- A jolly jape: The Galileo pendulum swing is a device similar to a Newton's cradle in which every pendulum is set to swing at a special rate. The central bog swings at 60 swing per minute, the one to its left takes 59 seconds and so on. When it swings at first it looks like the pendulums swing in a wave shape, then they have a more ordinary regular pattern, then they move into a different rhythm that looks like a step pattern, and then they return to the wave pattern and repeat the cycle over and over.