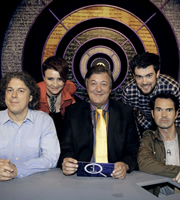 - Tangent: Jimmy once had a bladder complaint so he went to the doctor who pushed a camera that felt like the size of a pen into his penis so he could be examined. As the nurse slid the camera in she asked Jimmy what he did for a living. When he told the nurse that he was a comedian the nurse asked to tell him a joke. Jimmy claims that it was a matter of professional pride that he did. There are two sphincters on the way into the bladder, and Jimmy says the most painful bit is when the climber goes through these.

- Tangent: When Jack's father had a medical examination he got offered a DVD of it.

- Tangent: Cal had a similar experience to Jimmy back in her native New Zealand. When she was examined the doctor asked her: "Haven't I seen you on Thank God You're Here?" (the original Australian version) Cal replied: "Yes, but why are you recognising me now?"

- Tangent: Jack went to have a rash "near the top of my leg" looked at by his doctor, and his doctor mistook Jack for George Lamb. Jack was about to correct but then thought that if it was a STD )which it was not) that he was suffering from that it would be better for the doctor to think he was someone else.

- XL: The panel are shown a picture of a long, thin reptile and asked what it is. It is a legless lizard. Some lizards do not have legs. The difference between the legless lizard and the snake that the snake has jawbones which allow it to open the mouth wider. Snake eyes also have a film over them. An example of a legless lizard is the slowworm. (Forfeit: Snake)

- XL Tangent: Jack's brother once caught worms and kids at the school accused him of getting them by licking the loo seat.

- The panel play a game of "Stick the knees on the elephants". There are each given a silhouette of an elephant and some stickers, and are told where to stick where they think the knees are on the elephant. The answer is that they only have two, on the back legs, as the front legs are technically arms and thus have elbows. The popular internet / pub fact about elephants being the only animal with four knees is thus wrong.

- XL Tangent: Jack claims that he felt sorry for an elephant on "Planet Earth Live", because Richard Hammond was presenting it a piece to camera about elephants while wearing a necklace which had ivory on it.

- XL: According to a butcher a sheep has two legs. The front two are "shoulders". The front legs of pigs are called "hands" by butchers. (Forfeit: Four)

- An elephant drinks by scooping liquid with the trunk and squirt it back out again into the mouth. As the trunk is the elephant's nose it would drown if it drank through it. (Forfeit: Through its drunk)

- Tangent: You can drink tequila shots through the nose. Jimmy considers it the highest calling of a stand-up comedian to make someone laugh while they are drinking and the drink to by squirted out through the nose.

- Tangent: The front of house staff at the Savoy Theatre noticed during performances of Michael Frayn's play Noises Off that there were wet seats every day of the performance because people had wet themselves laughing. Jack did a gig at the Reading Festival and did so well that someone urinated into a bottle and threw it at his head.

- The other thing, other than the knees, that humans and elephants have in common is that we are the only mammals with chins. Nobody quite knows why we have chins, although we do know they are useful for speech.

- Tangent: P.G. Wodehouse wrote about a goofy upper-class person that looked as if he had swallowed a laundry basket.

- XL: The thing that the Ancient Greeks used for earache, that Christopher Columbus took 80 tonnes of to America and that Henry VIII made compulsory was a totally different kind of joint: hemp. Columbus had hemp ropes on his ship. Hemp was used as oil, a lubricant and as clothing. By the middle of the 19th century cannabis was recommended by the US Pharmacopoeia to help with neuralgia, tetanus, typhus, cholera, rabies, dysentery, alcoholism, anthrax, leprosy, incontinence, snakebites, gout, tonsillitis and insanity. It was considered to be a panacea - a cure all. It is illegal to sell cannabis seeds in America except for birdseed.

- XL Tangent: There is no real painkiller available except the one that we get from poppies that are also used to make heroin and morphine.

- The panel have another animal sticker round, but this time they are pinning the knees on a flamingo. Flamingo's knees are high up the leg, usually hidden under all the feathers. The joints down half-way the visible legs are ankles. Jack gets the question right and as a present gives Stephen an apple.

- Glaswegian woman lost their teeth on their wedding night. It was common to give the teeth to the husband as a 21st birthday present. It was considered that it would save money on dentistry bills for the rest of your life. At the time false teeth were made out of a mixture of things including wood. Some dentures were spring loaded. Some used actual teeth taken from dead bodies off battlefields. The most famous were from the Battle of Waterloo and were thus called "Waterloo teeth". Also, poor people sold their teeth to be used as dentures.

- Tangent: Jimmy's mother was offered to have all of her teeth pulled out when she was an 18-year-old nurse in Limerick.

- Tangent: George Washington and Abraham Lincoln had spring loaded false teeth. Lincoln would sleep in the Congress and as the jaw relaxed the spring loaded teeth would fire out of the mouth.

- Tangent: Jack says that a good idea for Dragon's Den would be false teeth for pensioners that shut whenever they sensed racism.

- XL Tangent: There is a tourist attraction in Victoria, Australia, called "Casper's World in Miniature", which at the end of it has a room full of sculptures made out of human teeth. They include a tooth fairy, a hamburger and a castle. When Cal went through this exhibition, she entered the gift shop and spotted an elderly man eating a mashed banana because he had no teeth. Stephen claims that when he is in Melbourne than when he hears a news report featuring Victorian Police, he thinks of the cops as looking like British Victorians.

- Tangent: There was a story in the newspapers about a female Polish dentist who got revenge on her ex-lover by extracting all his teeth. However, the story is completely false.

- Stephen takes out a piece of equipment that looks like a pair of pliers but with forked ends. It is a "masticator" which is device that allowed you to mash and chew up food before you put it into your mouth, so if you have no teeth you can easily swallow it.

- XL: The thing with noisy knees and a urine-soaked hair brush is the eland, a type of antelope. The hairbrush is on the top of the hair. The bigger it is the more likely it is they will mate, and they soak the hairbrush in urine to make it bigger. It also snaps its tendons over its legs. The thicker and bigger the muscles the loud the noise will be. The louder the noise, the bigger the chance of mating.

- XL Tangent: Billy Connolly made the point that when you shout to pick something up you know you are getting old. Cal's three-year-old son also shouts when he picks things up, because he is copying Cal who is 42. When Alan's daughter is carried up stairs she copies Alan by saying tiredly, "Oh, so many stairs!"

- XL Tangent: Jack got depressed recently because he is only 23 and he turned down sex with his girlfriend because he had heartburn.

- XL: The man who wrote The Cat in the Hat pronounced his surname "Zoyce". Dr. Seuss's real name was Theodor Seuss Geisel. His first children's manuscript story was rejected 27 times because he was told it had no moral. He also tried different surnames including "Rosetta Stone", and "Theo Lesieg", which is his surname spelt backwards. There was another doctor, whose surname was pronounced "Syooce" who did propose something else, which was the existence of Gondwanaland. (Forfeit: Dr. Syooce)

- The kind of glass that the Pope has on the pope-mobile is bullet-resistant. There is no such thing as bulletproof glass. The glass is four inches think and layered with vinyl. There is also one-way bullet-resistant glass which works due to the way the glass is layered. The shock absorbing layer is on the inside with the glass on the outside. The Vatican has 2.27 recurring Popes per square kilometre, because the country is only 0.44km big. (Forfeit: Bulletproof)

- If you had an aeroplane which was badly damaged on the back the best way to make it safer would be to add more protection to the front. The damage shows that it can easily take it in this location, so you should instead protect the bits that are not hit.

- A jolly jape from Stephen: he provides a 3D printout of a "Strandbeest", designed by Dutch artist Theo Jansen, which is a model that walks across beaches and sand on wind power alone. It contains no metallic or electronic parts. It can also detect the tide, walk away from the water, and anchor itself by hammering a pin into the ground if the wind is too strong. It can also store air in bottles and release it when the wind drops. Stephen shows the 3D printout, which only had to have the propeller added, and shows it working by using a mini-fan. Consumer 3D printers are available for about £1,600.