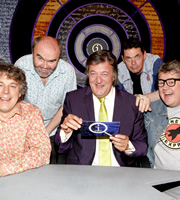 The QI Pleasure Gauge: An on-screen gauge will move the more the audience applaud, from yellow to red. If it goes into the red, a bonus is scored.

- Tangent: Bhutan was the first country to have a gross measure of happiness - the GNH (Gross National Happiness). Bhutan did not have TV or traffic lights for many years. To improve the GNH the King banned all unhappy TV shows. Slough had a similar system to improve happiness called "Making Slough Happy". It involved things such as watching less TV, laughing daily and doing good acts. It resulted in a 33% increase in their life satisfaction index.

- Tangent: The panel suggest improving the happiness of towns by giving happier names. Suggestions including renaming Slough "Yippee", Staines "Whoohoo" and Hull "Hot Diggity". Stephen points out the flaw that if a disaster happens in the town the newsreader would have to say it along with a silly name. Rich then remembers that he saw an Irish newspaper headline which read "Cork Man Drowns".

- XL Tangent: When Phill was about 10 he found a serious mining disaster which killed around 400 people in India funny because it took place at the Wankie Colliery.

- The average person has 150 real friends. Dunbar's number, named after anthropologist Robert Dunbar, claims we cannot have more than 150. Dunbar defines his idea of friendship as: "Containing the people you wouldn't feel embarrassed to join at the bar of the Transit Lounge of Hong Kong airport at 3am."

- Tangent: 150 people is the size of traditional hunter-gatherer communities, small religious groups such as the Amish and the average English village size at the time of the Doomsday Book. We also send on average 150 Christmas cards a year, the size of a company in the most modern armies is 150, and 150 is close to the average number of friends on Facebook, which is around 130.

- Tangent: At the current rate, in 10 years time one-in-three marriages in America will be between people who first met online. It is currently one-in-eight.

- You can tell if a friend is really pleased to see you by looking at their eyes. To smile you use both the eyes and the mouth. While you can easily fake a smile with your mouth, you cannot with your eyes. This was found by a Frenchman called Guillaume Duchenne, who found it out be electrocuting people's faces. A real smile is known as a "Duchenne smile". People who study happiness call a fake smile a "Pan Am smile", after the now defunct airline.

- When a waiter draws a smiley face on your bill you are more likely to give them a bigger tip. Other tactics that work including introducing your name and telling a joke. The Americans are the biggest tippers giving 20% on average, while the British give 10%, but the average left in restaurants is 8.5%. The Welsh tip more than the English, who are the worst tippers in the UK. Some American waiters will chase after you if you do not tip. In America, if you get bad service it is custom to still tip but then to put it in a glass of water and turn it upside down.

- Tangent: Stephen has a friend who is a producer on Broadway. When he goes to Joe Allen's, a restaurant often visited by actors, he will call waiters by clicking his fingers and shouting "Actor", referencing the fact that some waiters are out-of-work actors.

- Tangent: In Soviet Russia the first person to stop applauding was sent to the Gulag.

- XL Tangent: In Singapore they do not tip. Prime Minister Lee Kuan Yew put signs in rickshaws telling people not to tip.

- XL: Everyone expected to die in 1910 because they thought the nitrogen in the atmosphere would turn into laughing gas. That year Halley's Comet pasted the Earth and at the time astronomy was beginning to take shape as a serious science. However, some people were worried that the tail would pass through the atmosphere and turn the nitrogen into laughing gas (nitrous oxide), causing everyone to die laughing. Some people put rags in keyholes, over doors and windows and stop the gas coming in.

- XL Tangent: A man once laughed himself to death while watching The Goodies. The thing that made him laugh was a Scotsman fending off an attack from a black pudding with a set of bagpipes. He laughed for 25 minutes and then had a heart attack on the sofa.

- XL Tangent: Rich claims the funniest thing he has ever seen is John McCririck falling out of a boat. Rich was interviewing him, and after he fell out he got back up, pretended it did not happen and carried on from where he left off. As a result, none of the crew could laugh until two hours later. The man driving the filming equipment almost wrecked the vehicle because he was laughing so much he was swerving all over the road. Rich has the footage and (eventually) promises to the audience he will post it online.

- XL: The original Mr Happiness wanted to cheer up his front garden - by putting corpses in it. This person was Jeremy Bentham, the inventor of utilitarianism - "happiness equals the greatest good for the greatest number" - and he had views concerning the taboos around the dead. So he put "auto-icons" as he called them in his garden. He also decided to preserve his own body after his death. His body is stuffed and on display in a cabinet at University College London. His skin was stripped off and his bones had stuffing around them. However, his head was chopped of by student pranksters. There is also a clam that he invented underpants. He wore what we would think of as boxer shorts when at the time people curved their shirts over the pirate parts. (Forfeit: Garden gnomes)

- XL: The small furry animals that you would make happier by taking it to see Bambi are three types of bee that drink the tears of deer, as well also horses and humans. Luckily, the bees in question - lisotrigona cachii, lisotrigona ferva and lisotrigona partatriginum - are all stingless.

- Florence Nightingale did her best work in bed. After coming back from the Crimea she stayed for most of the next 50 years in bed and devoted herself to improving hospital care. This was to make up for what she saw as (and indeed were) her failures during the Crimea War. Troops were three times more likely to die at the hospital in Scutari which she ran than in a rough field hospital. A report showed the care at the hospital was terrible and Nightingale thought it would ruin her reputation. As a result she had a decline and so she tried to make up for it. She would get up and work at 5am writing letters, campaigning and so on, then spend the rest of the time in bed. Luckily, her work did make up for what she did during the war.

- Africa's dominant animal predator is the hyena. Lions are mostly lazy and are more likely to scavenge the kill of a hyena than vice-versa. The hyena laugh is used to communicate clam submissiveness.

- Tangent: Actors who find it hard to give convincing laughs have a trick which is to breathe out. It makes it sound they have laughed so much that they have run out of breath.

- Five pound notes are made out of a mixture of cotton and linen. Wooden paper is too fragile. (Forfeit: Paper)

- Your general mood does not change when you get older. It is a myth that you get grumpier as you get older, according to the Baltimore Longitudinal Study of Aging, which has been running since 1958. Adults change little after the age of 30.

Are You Pleased To See Me?

How can you be sure that someone is really pleased to see you?