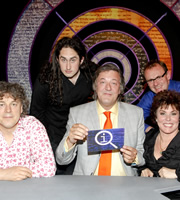 - The panel are asked to name an animal with a horn. Examples include antelope, horned toads and buffalo. Technically a horn is made out of bone. A rhino's "horn" is actually made out of hair and thus is not an actual horn. Antlers also do not count because they are shed every year. Humans can also have horns. A late 18th century nun who lived in a nunnery that was invaded by Napoleon was sent to an asylum. While she was there she banged her head on the wall repeatedly and thus grew a horn. It had to be cut because it was curving towards her eye. (Forfeit: Unicorn; Rhinoceros)

- If you threw a hippo into the deep end of a swimming pool it would first float, then sink to the bottom and walk to the shallow end. Hippopotamuses cannot swim and instead walk along the bottom of the water. So that BBC One ident featuring swimming hippos is totally wrong. Hippos have four teeth (two on the top, two on the bottom). They are also very hard to shoot because their skin is very thick. It weighs a tonne and counts for a quarter of the animal's weight. People often think hippos get sunburn and go red, but actually they sweat reddish oil which keeps them moisturised. People used to think they bled through their skin.

- Nobody knows for sure why hammerhead sharks have a hammer-shaped head, but the most likely reason is to find food. Sharks can sense electricity and can detect when something moves by their electrical impulse. For example, if a human moved an arm or leg, a hammerhead could detect it. Hammerhead sharks are bottom feeders and look for food on the seabed like stingrays and flatfish. The position of the eyes also gives hammerheads extraordinary depth perception. Sharks have rows of teeth so that when they loose a tooth another comes forward.

- Tangent: Dolphins can detect when something is dying or unwell and will come towards it. As a result you should not go swimming with dolphins with you have false breasts because they will ram them. There are stories dating back to the Ancient Greeks about dolphins saving humans. If dolphins reject you it is because you are fit. They are only interested in ill people. Also, dolphins are aggressive towards each other in the wild and also attack porpoises.

- XL Tangent: You should not touch a dolphin below the waistline because it gets them overexcited.

- It is hard to hang onto a hagfish because they produce slime to protect themselves. This allows them to escape more easily. They can turn a bucket of 20 litres of water into slime in minutes. They can also tie themselves in knots to help escape.

- Tangent: Ross claims that if he had a superpower it would be the ability to produce slime, because you could easily escape from villains who grip you in a headlock and use your abilities to help children with their heads in railings or to make gravy less runny.

- You would collect the snot from a sneezing humpback by flying a remote controlled toy helicopter over a humpback whale's blowhole. Whales, like pigs and birds have flu and there is a danger of the flu mutating and effecting humans. Technically speaking, whales do not sneeze but their snot flies out through their blowhole, so researchers used little helicopters to collect the snot to study it. The plan originated from researcher Karina Acevedo-Whitehouse who began by using a Petri dish on the end of a long stick and waving it through the plume but it was too difficult, so she used the helicopter. Humpback whales travel 5,000 miles a year, more than any other whale.

- XL Tangent: A friend of Ross's tried to steal a squid from a sea life centre in a carrier bag. However, his friend could not find a carrier bag which did not have the safety holes in the bottom which allow you to breathe with it over your head. This kind of bag would not work because the water would flow out. Eventually he did find a suitable bag. He glued up the holes with Sellotape and superglue, and got a tank of water to put the squid in. However, he failed because the handles on the bag broke because it was too heavy. He used a carrier bag because he wanted to get home on the bus.

- XL: The best way for a hamster to overcome jetlag (other than holidaying in England or in the same time zone as the UK) is to give it Viagra, so long as it is eastbound. Jet lag is a lot worse when travelling east than it is west.

- XL Tangent: Stephen was once visiting someone and saw a ball. In a merry mood he kicked it out of the window. However, he did not know that the ball contained a hamster in it, as he had never seen such a thing before. Luckily the hamster was not harmed.

- XL: A question on "hymenoptera", the study of insects. Honeybees get a real buzz when given cocaine. Like humans they overact and exaggerate when given it. As a result their dances which indicate where pollen is often iclaim that there is more honey than there actually is. 85% of all bee species are loners and do not have hives. Only about 20 of the thousands of species of bee are honeybees. Japanese honeybees protect their hives from predators such as hornets by smothering the attacking in a ball which causes the foe to boil from the heat of the bees. 75% of all the fruit on the planet is not actually pollinated by bats.

- XL Tangent: Smoke makes honey bees calmer because it alarms them so much that they think someone is attacking the hive. They then eat all their honey, become bloated and become passive.

- The panel are asked what the following description is of: "Pure, intense, brilliant pain, like fire-walking over flaming charcoal with a three-inch rust nail your heel." It is the string from a bullet ant. It was described by Justin O. Schmidt who invented the Schmidt scale, which describes the pain brought on by insect stings and bites. He himself has been stung and bitten countless times and gives details descriptions of the stings. His scale starts at 1.0 and finishes at +4.0, which is the rating of the bullet ant. Here are some of his descriptions.

- Bullhorn acacia ant: 1.8 - "A rare, piercing, elevated sort of pain. Someone has fired a staple into your cheek."

- Bald-faced hornet: 2.0 - "Rich, hearty, slightly crunchy. Similar to getting your hand mashed in a revolving door."

- Paper wasp: 3.0 - "Caustic and burning. Distinctly bitter aftertaste. Like spilling a beaker of hydrochloric acid on a paper cut."

- XL Tangent: There was a documentary called I Was Bitten about a man who wanted to be bitten by snakes. He appeared to get pleasure and highs from the bites.

- XL: The most aggressive mammal on Earth is the honey badger, formerly known as the ratel. Despite the name, it is not a kind of badger. They attack lions, humans, hyenas and buffalo. They have huge claws to attack with. The part which they attack first is the testicles. According to Scientific American in 2009 the honey badger is pound for pound is the most fearsome land mammal. Honey badgers eat honey and use a bird called the honey guide to find it. The honey badger will rip open the hive and the honey guide is given honey as an award. Honey guides also lead humans to honey.

- XL Tangent: Police dogs are trained to bark every time they hear some say "bastards".

- The panel are show three images and are asked to identify all the animals that they see. Although what they see looks like a shrew, a hedgehog and a mouse, they actually kinds of the same animal: the tenric. This is an animal from Madagascar which filled similar roles to animals in Europe, but is not related to them. (Forfeit: Hedgehog; mouse; shrew)

- Rhino horn is used in traditional Chinese medicine to keep fevers at bay, not as an aphrodisiac.

Can You Hang On To A Hagfish?

Stephen and his guests discuss the defence mechanisms of the Hagfish. When captured it secretes copious amounts of slime and ties itself in knots.