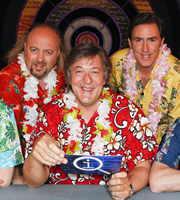 - Stephen and the panel are dressed in Hawaiian shirts and wearing a lei (flower necklace). The centre of the set is covered in sand.

- Holiday Homework: Each of the three guests (Alan was given "detention" instead) instead of being asked questions give Stephen a bit of a break and come up with their own interesting information about places beginning with "H" which they have visited.

- Rob: Hungary - Ignaz Semmelweis pioneered hospital hygiene and saved many lives, but he died in both poverty and insanity. This was because doctors could not bare the fact that thousands of their patients died because they did not wash. "Goulash" is Hungarian for "cowboy". Other things which come from Hungary include the Rubik's Cube, the automatic gearbox, and the ballpoint pen (the last two of which were both invented by Lazlo Biro). The national drink is bull's blood, which gives raise to the claim that pasteurisation was not invented by Louis Pasteur but by a Hungarian, but because the information about it was first written in Hungarian, a language spoken by only a few people, no-one bothered to read it. The Hungarian language is related to the Finnish and Estonian languages and is unrelated to all other languages in Europe. The word "hello" is Hungarian, because one of Thomas Edison's assistants was a Hungarian and he once said "Halom" meaning "I can hear you", which then became "hello".

- Tangent: Alan collected stamps for about six months when he was about 11-years-old and he would get a selection of unusually shaped stamps from Hungary, so Alan believed they must have lots of spare stamps or no-one was sending any letters. Rob claims that he once collected stamps and stopped claiming that, "philately will get me nowhere."

- Bill: Bhutan, Himalayas - Bhutan is the only country in the world which is a "carbon sink", which is a country which consumes more carbon dioxide that it produces, so it is the most environmentally friendly nation on Earth. It is written in the country's constitution that the forest area of Bhutan shall never dip below 60%. It is a Buddhist country and the national sports are archery and darts - but not darts as we know it, as their darts are much larger and the target is much further away. The main export is hydroelectric power. The general state of the country is measured not in money, but in happiness.

- XL Tangent: In Bhutan they paint penises on doors as a fertility symbol.

- Rich: Hawaii - It was discovered by Captain Cook and locals ate him. Hawaiians have outrigger canoes so when you return to shore you are in fact surfing. Rich has a model of one made out of a type of wood called "willi-willi". The Hawaiian language has only 12 letters. One of the most famous Hawaiian words is "wiki", which means "quick quick". Another word, "da kine", means "a word you cannot think of". The vast majority of the land is owned by the Dole Food Company for growing pineapples. Hawaii is home to the tallest mountain on the planet, Mauna Loa. Surfing was invented by the Polynesians.

- Tangent: Bill goes surfing in Devon in winter. Bill once managed to stand up on the board, but was so excited about it he immediately fell off.

- XL: You are most likely to see fish falling from the sky in Honduras, where they hold a festival every year celebrating such events. Nearly every single culture has stories about fish or other aquatic animals raining down. The oldest known such story is the plague of frogs in Exodus. Nobody knows entirely for sure how it happens. Some believe that a waterspout (an aquatic tornado) picks up the fish and drops them over land. Others claim that rivers bust their banks, taking fish with them, and when the water goes away leaving the fish people assume it must have rained fish. We do know that fish eggs drop from the sky because birds drop them.

- The chances are you would very much like to spend two weeks lying on a pile of parrotfish droppings covered in phenylbenzimdazole sulfonic acid, because pure white soft coral sand comes from the droppings and the acid is the chemical name for sunscreen. Parrotfish get their name for the beak-like mouths. They eat a form of coral and excrete white sand. A single fish will excrete over a tonne of sand in a year. The maximum factor of sun protection is 50. The factor relates to how much longer you can stay in the sun before you need to reapply the sunscreen. For example, if the sun was so hot you would catch sunburn in a minute, then a factor 50 sunscreen will keep you protected for 50 minutes.

- XL Tangent: To build a sand castle or sculpture the sand needs to be one-eighth water. The annual sand sculpture championships take place in Vancouver, Canada. The rules are very strict. You are only allowed to use sand in your 6 metre by 6 metre plot. No adornments are allowed, and you cannot use flour or sugar to give the sand more consistency. Once the sculpture is finished the judges spray it to protect it and then it is judged. The longest sand sculpture is 16 miles long in Myrtle Beach, South Carolina, which Rich describes as the "Red Neck Capital".

- The lucky thing about the unluckiest man in the world was that he survived two atomic bombs. Tsutomu Yamaguchi of Japan was in Hiroshima on business when the first atomic bomb landed in the country. He was badly burned, but survived and spent the night in the city. The next day he got on a train to Nagasaki where the second bomb landed, and he survived again. He lived to the age of 93, dying in January 2010. You can argue he was the luckiest man in the world for surviving two atom bombs, or the unluckiest for being bombed twice. Yamaguchi claimed that he knew about 100 other people who were also bombed twice.

- The largest steam engine of all time was used to reclaim land in the Netherlands, especially Holland. Some argue the reclaimed land is the largest man-made structure on Earth.

- Tangent: Bill once landed in a Dutch airport with his guitar, and the customs officer asked him to open the case. Bill said it contained a guitar and the officer said: "That's no guitar, that's a Gibson 71 with a flying pick-up."

- XL Tangent: "Dyke" is an old word for "dam". The story of the Dutch boy putting his finger in a dyke is of American origin written in the 19th century. While it became a popular story in the USA and Britain it is mostly unknown in the Netherlands. However, some people do know about and have statues of the boy doing this deed. The word "dyke" meaning "lesbian" comes from "bulldyke", which meant to "engage in lesbian activities" in 1921, but about 20 years before that the word "dyke" was slang for the vulva.

- XL: If you were in the middle of Epping Forest and you knew that the closest pub was is due north, the best way to find north if you do not have a compass is to wait until night and find the North Star, also known as Polaris. To find it, find the constellation Ursa Major (the Great Bear), find the two stars at the far right and follow the line they make. They will take you to Polaris. It is a myth that you can use moss to tell which way is north because it grows on all sides of a tree, not just north. Many other methods of finding directions also have problems. For example, some people believe that the sun rises in the due east and sets in the due west, but this only happens on an equinox, so it only works twice a year. Another is to point the hour hand of your watch at the sun, and the distance between it and 12 o'clock is roughly south, but there are problems with regards the difference between GMT and BST. You could also try a magnetised razor blade over water. (Forfeit: Moss)

- XL Tangent: If you blindfold someone and told them and told them to walk in a straight line, within 66 feet they would be back to were they started, because you would naturally walk around in a circle.

- The country which contains the most of the River Nile is Sudan, which is also the largest country in Africa. The river flows into Lake Victoria. The source of the Nile is Rwanda, but at first it was thought to be Uganda, where the river ends. (Forfeit: Egypt)

- XL: The panel a shown the border between Sudan and Egypt and are shown some disputed territories between them. An arrow points to a very small part on the Sudanese side and they are asked who it belongs to. The answer is no-one. The area of Bir Tawil is next to an area of arid land in Egypt which contains nothing really of interest, but a small area in Sudan is worth having because it contains oil. Thus both sides deny that they own it because they believe it will increase their chances of someone else arguing on their behalf that they do own the more valuable area. (Forfeit: Sudan)

- The nearest place to find American soil from QI's studio in London is the memorial to John F. Kennedy in Runnymede, Surrey. It is a myth that an embassy is based on the soil of that country, so the American Embassy in Grosvenor Square (at the time of recording it was being moved) is on British soil, not American. The Americans wanted to buy the lease from the owner of Grosvenor Square, the Duke of Westminster, and he said he would if the Americans would give back to his family the state of Virginia which they confiscated from them during the War of Independence. The deal did not go ahead. (Forfeit: Grosvenor Square)

- The thing you should be weary of falling on top of you if you live under a flight path is ice which has frozen on the wings of a plane. Aeroplanes do not jettison frozen urine out of the plane. However, some trains do jettison waste, which is why on some trains you still cannot go to the toilet while the train is standing in the station. (Forfeit: Urine)

- The country which has the lowest age of consent in Europe is Vatican City, which is 12. When it became a separate state from Italy under the Lateran Treaty of 1929, they elected to keep the Italian laws from 1924 which at the time stated that the age of consent in Italy was 12. Italy then changed the age of consent to 16 and Vatican City has never bothered to change it. Vatican City also has the highest crime rate in the world (600 offences per year in a country with a population of 500), it has the most helipads per capita and the most TV stations per capita than any other country in the world.

- XL Tangent: The only people who can vote in Vatican City are cardinals under the age of 80. The only vote they have is to choose a new pope.

The Unluckiest Man in the World

Stephen and guests talk about Tsutomu Yamaguchi who amazingly survived both atomic bomb attacks on Japan during World War II. Somehow he managed to get a train from Hiroshima back home to Nagasaki, but this was where the second bombing took place.