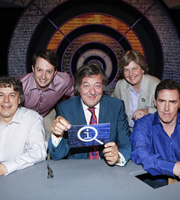 - The panel are asked to name a henge. However, it turns out that Stonehenge and Seahenge are not technically henges as recognised by archaeologists. A henge has an embanked area outside with ditches on the inside. Stonehenge is the opposite, despite the fact that the word "henge" comes from the word "Stonehenge". Up until the 20th Century people quarried the stone from Stonehenge by setting fires in the lintels that held the top parts and cracking the stone. Druids have been celebrating at Stonehenge only since the beginning of the 20th century and there is no evidence to suggest druids worshipped there before then. In 1905 Stonehenge was on private property, and then it was brought by a man who owned a lunatic asylum nearby in 1915 as a present for his wife at auction. Three years later the wife gifted Stonehenge to the nation. Seahenge consists of 55 bits of oak mostly underwater in Holme-next-the-Sea on the Norfolk coast. (Forfeit: Seahenge)

- Tangent: Carhenge is a mock-up of Stonehenge in Nebraska built using cars sprayed with grey paint. It appears in the inner sleeve notes of Bruce Springsteen's album The River, as a reference to the song "Cadillac Ranch". The builder dedicated it as a memorial to his father.

Tangent: Alfred Watkins, author of the 1920s book The Old Straight Track, proposed the idea of leys, which are wrongly known as ley lines. The panel are shown some ley lines, which are actually made using the geographical positioning of Woolworth's stores in Britain, by someone mocking the idea of leys.

- XL: The panellists are each given a replica of a bronze bowl with a small hole in the bottom of it and are asked what it is. It is an early form of clock which works when it is placed in water. Time flows as the water enters the bowl from the bottom and causes it to sink. The original is Bronze Age and found in Northern Ireland. Other forms of ancient time measurement before clocks include the Ancient Greek water thief which was the opposite of the bowl - it measured time by water flowing out of it. There are also time candles supposedly invented by Alfred the Great. Then there were explosive sundials which had a lens on them so at a certain time of day it would focus the rays of the sun on a cannon fuse. The Chinese used scented jock sticks so you could tell time using smell.

- XL Tangent: The Antikythera was a mechanism discovered by Greek sponge divers in 1901 which was an Ancient Greek device dating to around 180 BC which could tell you the course of the sun, the moon and the known planets. When you entered a date it could calculate their positions. It divided a year into 365 days, giving an extra one for leap years, it could predict eclipses of the sun and moon, and could tell the appearance of the zodiac constellations. It also kept track of the Olympic years. What is even more remarkable was that they thought that the Earth was at the centre of the universe.

- XL Tangent: Stephen repeats an early QI fact for Sandi, about if you put sponges in a liquidiser they would be able to reassemble themselves, even if you put more than one sponge in.

- XL Tangent: The most accurate clock is an optical clock that can tell the time to one second in 3.7 billion years. It is used to calculate GPS systems to within one metre (possibly less) and to help send emails quickly and accurately.

- XL Tangent: Edward VII had Sandringham time. He set his clocks half-an-hour earlier so that he could go hunting earlier. Sandi liked the idea so much that she would reset her clocks on New Year's Eve during the day so that she would make her children think that they had stayed up until New Year's Day.

- XL Tangent: Bergsonian internal time is when things seem to take an entire lifetime in your own head and other things can seem to go really fast.

- Tangent: Harald Hardrada had a long suit of chain mail armour so strong it could not be penetrated by a spear. The armour was named Emma.

- Tangent: Most of the modern Christian names used in English come from after the Battle of Hastings. Names given to us by the Normans include William, John, Robert and Richard. Also, English evolved after the invasion because we had more words to describe things such as animals. There was the Saxon/Old English word for the animal (cow, sheep) and then the French/Norman for the meat of the animal (beef, mutton).

- Tangent: It is an advantage for modern pilots to speak in a posh accent because passengers find it more reassuring. People also tend to like Scottish (in particular Edinburgh) and Geordie accents, but dislike the Birmingham accent. Most people also trust a man than a woman.

- Tangent: Sandi was on a British Airways flight from New York to London six weeks after 9/11, and the plane directly in front of Sandi's, which was going to the Dominican Republic, crashed. Sandi and the rest of the passengers deplaned and returned to the plane 12 hours later. The pilot said: "Good evening ladies and gentlemen. This is the delayed flight to London. Many of you seasoned travellers don't watch the safety briefing, but perhaps today..."

- Tangent: Stephen was once on an Ansett flight from Perth to Adelaide and the pilot said: "It's time to push some service down the isle and some scenery past the window."

- XL Tangent: The chairman of the Pork Pie Association is a vegetarian.

- The panel are shown a series of unusual tubes and asked what they would be used for. They are actually war tubas used by the Japanese during World War Two to detect enemy aircraft. They could be used to tell the direction and distance of planes. Smaller examples used by the British include yokes that you placed over your shoulders.

- Tangent: The ears of a barn owl are inside a kind of sound dish so that they can hear things much more accurately.

- This week, "General Ignorance" has a "Generals" theme.

- Hannibal of Carthage used poisonous snakes in large pots to defeat King Eumenes of Pergamon in 184 BC. (Forfeit: Elephants)

- Tangent: The film Snakes on a Plane came about when some scriptwriters were joking about the worst idea for a film title, and they thought it was so bad that it was good.

- The successor to Harold as King of England in 1066 was Edgar the Ætheling. He reigned for two months at the age of 15. However, he could not hold onto the throne and spent most of his life abroad. In order to be a Saxon king you had to come from one of five or six particular families and then you were elected. (Forfeit: William the Bastard)

- Julius Caesar wore a laurel wreath to cover up his baldness. He also invented comb-overs in order to disguise his lack of hair.

Jo Brand was meant to appear in the episode, but was ill at the time of recording, so Sandi Toksvig stood in.

The QI XL edition of this programme, shown on Saturday 15th January, was delayed from its planned 22:30 broadcast until 22:50, due to overrunning snooker coverage.

Stephen Fry asks his guests what the Japanese used 'war tubas' for during World War Two.