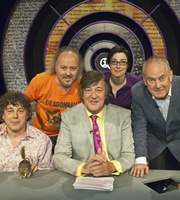 - Behind Stephen are two skeletons.

- By looking at someone's palms you can tell that someone might catch an illness. Palm diagnosis allows a person to see if someone is ill by looking at the ridges of the palms. This was discovered by Francis Galton, whose reputation today is tarnished by the fact he was responsible for the creation of eugenics. In the 1920s it was discovered that people with Down's syndrome have different palms from other people. By the 1960s at least 20 conditions had been discovered which can be detected by palm diagnosis. (Forfeit: The Future)

- Tangent: Oscar Wilde, Mark Twain, Queen Victoria, Edward VII and William Gladstone all consulted palm readers. The belief that reading palms can tell the future is "palmistry". One of the most famous palmists, who read Wilde's palms, was Cheiro (from the Greek for "hand" - his real name was William Warner), an Irishman. Cheiro's great-great-grandson's brother married Elizabeth Taylor. Cheiro also called himself Count von Hamong.

- Tangent: One of the arms of the skeletons behind Stephen rises up and begins to "goose" him. The arm is actually on a wire controlled by Alan.

- Marcel Proust, author of À la recherche du temps perdu had such a limp handshake because it was to double-bluff people who thought he was gay. Proust was gay but "in the closet". He was ashamed of being gay and went to brothels to try and cure himself. A Romanian count friend suggest that Proust should give a firm handshake in order to make people think he was straight and not an "invert". Proust argued that this was what people would be expecting so he decided to give limp handshakes as a double-bluff. Proust would only write in a cork-lined room.

- Tangent: According to Gyles, an African handshake is very soft and lingers. He demonstrates this on Sue who is somewhat unnerved. Archbishop Desmond Tutu did this to him for a long time. André Gide, another homosexual French writer, spent time in North Africa. However, unlike Proust, Gide was out about his sexuality and is probably the man who invented the word "homosexual" in the way we use it today in his book Corydon.

- XL Tangent: Proust's work is famous in that most people who try to read it never get to the end. The opening scene in the first episode features the narrator of the story dunking his biscuit in a cup of tea. As he smells the biscuit and tea it brings back lots of memories, which is the actual story. A "Madeleine moment" is one which brings forth lots of memories, as a Madeleine is what the narrator is dunking.

- Tangent: People judge others on their handshakes, whether they be hard, limp, with the second hand coming into clasp, sweaty hands, etc. The person with the dominance in a handshake it the person with the hand on the outside. Gyles demonstrates this on Sue, where Sue lets Gyles dominate her. The Welsh Labour MP Paul Flynn once suggested that people who give really strong handshakes should be charged with assault.

- If you had been transported to the 19th century, suffered from a headache and you wanted to be trepanned (have a hole drilled in your head), the best place to have it done would be in Papua New Guinea. When they did this they sealed the hole with coconut milk which was sterile and thus reduced infection. In London, 78% of trepanning procedures resulted in death from infection rather than having a hole in the head. Trepanning is so far as we know the earliest form of surgery. We know people survived it because the bone and tissue healed around skulls found in archaeological digs. The earliest known forms involved getting the patient's head between your legs and scraping away the hair, flesh and bone with a sharp stone. (Forfeit: Just here [Alan points to the top of his head])

- XL Tangent: Prince Rupert, nephew of Charles I, who was played by Timothy Dalton in the film Cromwell, underwent trepanning. In 1591 alone Prince Philip of Nassau had trepanning 27 times, but lived. He later went on to win a drinking competition against someone who died from drinking too much.

- Tangent: Craniotomy is modern version of trepanning in which surgeons open the skull to operate on the brain. The patient is normally kept awake because surgeons still know so little about the brain that they do not want to risk touching the wrong part of the brain. So by keeping the patient awake they can ask the patient to do tasks to show that nothing is wrong. One bluegrass banjo player, Eddie Adcock, played his banjo during his craniotomy to cure his hand tremor, showing that his brain was working fine.

- Tangent: Alan saw an episode of Star Trek where Spock had his brain taken out of his body and replaced with another one. Spock lay on his back and a board was put over his head. The surgeon behind him just moved his hands behind the board, saying that the brain was out and the new one was in. The board was removed and Spock's head looked exactly the same as before.

- XL: On a picture of a decapitated saint it is a matter of debate as to where the halo should go. Some people put it over the decapitated head, some over stump where the head was, some do both, such as one painting of St. Denis, patron saint of Paris and headaches. A halo are also known as a "nimbus" or "gloriole". Some people, such as Pope Gregory the Great, have a square halo and others have a triangular halo.

- XL Tangent: A church in Mexico displays the penis of St. Joseph, which is depicted with a halo.

- XL Tangent: In some Nigerian tribes it was custom to touch the penis of the person as a form of handshake.

- You would know if you have a shrunken head because real ones had crude stitching. To make one you take the skin (including the hair) off the head in one go, throw away the skull and eyes into a river, turn the skin inside out, scrape the inside out skin, turn it the right way around again keeping the shape as perfect as possible, bind the lips and eyelids together, insert hot stones and sand into the skin, then simmer the skin in boiling water and finally smoke it. The sowing on the lips of genuine shrunken heads is normally very crude which is how you can tell it is real, whereas fake ones have better stitching. While the practice is illegal, every Ripley's "Believe it or Not" museum has a shrunken head, meaning that they have at least 29. Shrunken heads come from Ecuador and are mostly associated by the Shuar people, who are often said to be the cruellest people in the world. They did this because it was a way of saying that they owned the dead person. They are associated with blowing poisoned darts out of pipes.

- Tangent: The Shuar once killed a Spanish conquistador who wanted their gold by pouring molten gold down his throat.

- The panellists are each given a cardboard two pound coin and are asked to draw the Queen's head onto it. Each of them gets it wrong when they draw the Queen as facing left (except Bill he draws her looking out). All coins featuring the Queen have her facing right. 88% of people think the Queen faces left. Each monarch (except Edward VIII) alternates between facing left and right, so the Queen's father George VI and (if he becomes king) Prince Charles did or will face left. This has happened ever since Charles II. The Queen however does face left on stamps and this is one theory was to why people think she faces left on the coins. Another is to do with the dominance of right-handedness. (Forfeit: A photoshopped image of a coin with the Queen facing left and a red cross struck threw it is shown.)

- Tangent: In Denmark most people think their monarch, Margrethe II, faces left on their coins when she actually faces right. On stamps she looks straight out.

- XL: If you try and comb a hairy ball you will always have a bit sticking up. No matter which way you comb it there is a bit that sticks up because it twirls. On a human head this is shown by the cowlick, which is in the centre from where the hair direction occurs. A double cowlick is what causes people to have a double crown. On most people the cowlick is clockwise. However, gay men have an increased percentage chance of having an anti-clockwise cowlick.

- XL Tangent: The comb-over is patented in the USA. Bill then gives himself a comb-over.

- XL: The Chinese hula-hoop craze of the 1990s was stopped because three girls damaged their internal organs and the state media claimed it was because they liked to play with hula-hoops. In 1958, Britain underwent a hula-hoop craze but it lasted very briefly. The company that made them, Wham-O, made a loss on them in just that year, because they did not expect the sales to stop so suddenly. The hula itself is a dance from Hawaii. One theory given for the popularity of hula hoops in the 1950s was because of the raise of Elvis and his dancing. When Elvis appeared on The Ed Sullivan Show, he was not depicted below the waist for fear it was too sexual.

- If you have a nosebleed you should tilt your head forward and pinch your nose. After 12 minutes it should clot naturally, but after 20 minutes it is still going it is best to seek medical attention. If you tilt your head back there is a danger of the blood flowing down your windpipe and choking you to death. Common causes of nosebleeds are being punched in the face, blowing your nose too hard and picking your nose. (Forfeit: Tilt it back)

- Tangent: It is possible to have a nosebleed through your eyes if the blood flow is misdirected.

- There is no danger with cracking your knuckles. It is believed wrongly that it could cause arthritis, but this has been proven to be false. Dr. Donald Unger was told by his mother that if he cracked his knuckles he would get arthritis, so as an experiment he cracked the knuckles only on his left hand for 60 years. When a fellow doctor checked his hands it was discovered that there was no sign of arthritis, at which point Unger shouted: "You were wrong mother! You were wrong!"

Goosed By A Skeleton

How is that skeleton goosing Stephen?