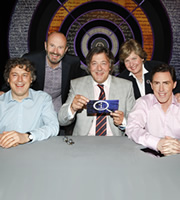 - Out a selection of tartans displayed, the only one that Stephen would be allowed to wear is the Royal Stewart, which has a red background with darker red criss-cross lines, green squares and thin yellow and white lines. As this is a royal tartan anyone in Britain can wear it because the Queen is our "chieftain". However, clan tartans are a very recent idea, which came about during the 19th century when Scotland became associated with the royal family, especially Queen Victoria. Tartans were not related to families, and the idea of family or clan tartans were mainly the ideas of tartan salespeople wanting to sell their stock. The word originates from the French "tiretain", and was originally worn as a long robe over one shoulder. The shorter "skirt" kilt was an English invention. An Englishman called Rawlingson who owned an iron foundry in Scotland thought it would be a simpler and quicker thing to put on.

- Tangent: Amongst the other tartans displayed is the Sikh tartan for the Singh, which is mainly purple and green. A rich Sikh businessman went to a tartan company and asked for a tartan for his people.

- XL Tangent: The American word for tartan, "plaid", comes from the Gaelic for "blanket".

- Tangent: The correct way to get the height of a kilt is to kneel down. The bottom of the kilt should touch the surface. Sandi says this was how they measured for skirts at her boarding school. Her uniform rules also meant she had to wear two skirts - a white pair with a blue pair on top.

- Tangent: Apart from caber tossing, other events at the Highland Games include "weight over the bar", "sheaf toss", "hammer toss", "putting the shot" which used to be called "putting the stone", and "dancing". While some people try to claim it goes back to King Malcolm III, son of murdered King Duncan, it is actually another recent invention dating back to the 19th century which was liked by the royals. Later Baron Coubertin attended them and included some events in the Highland Games into his Olympics, including the hammer and the shot put.

- XL Tangent: Donald Dinnie is the most successful competitor at the Highland Games. During his career he won medals in all the disciplines. He once won 20 medals in one day. He took part in the games from 1850-90. Dinnie was best at caber tossing, but also good at high jumping. During one high jump his kilt knocked the bar off twice, so in the final attempt he took his kilt off and successfully completed the jump.

- The thing that was regularly smuggled into the USA from Canada between 1989 and 2010 for the traditional Burns Night celebrations was haggis. The USA stopped imports of haggis in 1989 due to the dangers of BSE and other related problems in the lungs. The first reference to haggis in the British Isles is in Lancashire, but some believe it could be Scandinavian, like the word "offal" which comes from the Danish for "rubbish". Burns Night is celebrated on Robert Burns's birthday, 25th January.

- Tangent: Fred recites the first verse of the Burns address to the haggis which is said on Burns Night: "Fair fa' your honest, sonsie face, great chieftain o' the puddin-race! Aboon them a' ye tak your place, painch, tripe, or thairm: Weel are ye wordy o' a grace as lang's my arm." A friend of his had translated the poem into German for a Burns Supper over there but the poem was translated back into English. The line, "Great chieftain o' the puddin-race!" was translated as: "Mighty Führer of the sausage people!"

- Tangent: Robert Burns was fiercely apposed to the slave trade. In the Burns Museum there is a photograph of Muhammad Ali, who visited the Museum in Scotland because he was a student of Burns due to his opposition to slavery.

- Tangent: Stephen was talking to some Scottish people who complained to him saying that the Scottish accident is not difficult to understand as the English think and that the Americans understand it. Stephen later went to see Trainspotting in the USA which came with subtitles all the way through.

- XL Tangent: In Vancouver, Canada, they celebrate Chinese Burns Night because Burns Night and Chinese New Year often fall close together. It is also known as Gung Haggis Fat Choy and the haggis is served with bean curd sauce.

- XL Tangent: The biggest Highland Games in the world are held in San Francisco.

- XL: Once he conquered Mount Everest the thing that Sir Edmund Hillary did for an encore was to try and find a yeti. He wanted to try and settle the matter of whether they existed or not. He concluded that it did not. He did discover certain things which could be explained like the footprints. For example, he noticed that footprints get elongated when they melt in the sun, which explained the large yeti footprints. It should be pointed out however that one of the members of the expedition said that they were probably too noisy and so scared any yetis off. Some believe that actually Hillary was not on a yeti hunt, but that he was really on a spying mission because two of the people with him were rocket experts. Thus some think he was spying on Chinese rocket instillations in Tibet.

- XL Tangent: It was Hillary who got to the top of Mount Everest first and not Sherpa Tenzing Norgay. Tenzing wrote in his autobiography that Hillary reached the top first and Hillary told Tenzing that they should say that they both reached the top together. Then the King of Nepal said that it was Tenzing who got to the top first and Hillary did not say a word against the claim. Hillary devoted most of his life to helping the people of Nepal including the building of 25 schools.

- The quickest way of getting Briain Blessed up to the top of Mount Everest would be to fly him to the top and to be dropped off by helicopter. This has only been done once, by Frenchman Didier Desalle, because due to the thinness of the air and strength of the wind it is very difficult to keep airborne. He stayed for two minutes before taking off again, making it the highest ever landing and taking off of a vehicle. Brian Blessed has attempted to climb to the top and got very close, but had to go back to save someone's life. He got to 28,000 feet, and was just a very short distance away to the top. He is the oldest man to climb this distance without the assistance of oxygen. Blessed is also a black belt in judo, a boxing champion (he once boxed with the Dalai Lama), is the oldest man to go to the North Pole, and he keeps overs 2,000 animals in his house and gardens in Surrey.

- Tangent: Rob once went skydiving and was told you could not skydive higher than 17,500 feet without the assistance of oxygen.

- Tangent: Most of the people who try to climb Everest die from oedemas in either the brain or lungs. There are signs along the route of Mount Everest saying that if you have a headache then go back. There is an area on the mountain called the "Death zone" which contains a lot of bodies in it. Some Sherpas are planning to clear the area soon.

- If you are on the top of a mountain you can tell how high you are without electric instruments by boiling water. For every 1,000 feet you climb the boiling point of water drops by one degree Celsius. So if you tried to boil water on the top of Mount Everest it would be at 72 degrees, but if you were at the bottom of the Marianas Trench it would be 584 degrees. This is because of the air pressure. The field of telling your height using these methods is "hypsometry".

- Tangent: You can use field crickets to tell the temperature. Below 13 degrees Celsius field crickets make no noise, at 13 degrees exactly it chirps once a second. It then increases at a steady rate, so if it is at 140 chirps per minute it is 22.5 degrees.

- XL: When digging the Channel Tunnel the person who made sure that the English and the French met in the middle was a German. Max Schuler invented a gyrotheodolite which uses the rotation of the Earth to calculate the direction, unlike a compass due to the magnetic ore or GPS because there is no line of sight. The two people who met in the middle were Frenchman Philippe Cozette and Englishman Graham Fagg. They were just 300 millimetres out. However, they actually did NOT meet in the middle. The English made further ground because of geological difficulties.

- XL Tangent: Alan talks about the novel Birdsong by Sebastian Faulks, which is about the tunnelling and digging of trenches by sappers during World War One. Alan gets so engrossed he stops himself saying that people should buy the book rather than let him explain it.

- XL Tangent: For some considerable time one of the digging machines used by the English was left on the side of the tunnel with a sign next to it saying: "One careful owner". The French named their machines Brigitte, Europa, Catherine, Virginie, Pascaline and Séverine. After the tunnel was completed they were broken down, rebuilt and sent to other parts of France. The British machines had no such names and after they were finished were dug into the ground and left abandoned.

- XL Tangent: A man called Colonel Barog once dug a tunnel for the Indian railway and the two ends of the tunnel missed each other in the middle. He was so ashamed he shot himself.

- No country can lay claim to being the modern home of the Huns. The idea of Germany being the home of the Hun came from a speech made by Kaiser Wilhelm II in 1910 during the Boxer Wars, who said: "We shall take no prisoners. We shall show no mercy. We shall sweep down on them like the Hun." The actual Huns came from the East, and were an army rather than a people. (Forfeit: Germany)

- Tangent: During the 1970s when Fred was a student at Dundee University he went to a bar called the Speedwell Tavern whose landlord was married to a German woman. The students referred to her as: "The Hun at the till". Stephen also drank there when he was Rector of the Dundee University.

- If you are afraid of heights you suffer from acrophobia. Vertigo is the name given to the dizziness induced by heights. (Forfeit: Vertigo)

- Tangent: There is a story that James Stewart, the lead actor in Alfred Hitchcock's film Vertigo smuggled a yeti's hand out of India and hid it in his wife Gloria's underwear in the luggage.

- Tangent: Everest should be pronounced "Eve-rest", because the person whom it was named after pronounced his name that way.

Poem for a Haggis!

Fred MacAulay recites part of the Burns address to a haggis and follows with a hilarious German translation.