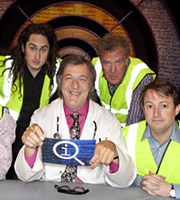 - The set is covered in warning sides. Stephen is in a white coat and the panel are wearing high visability jackets.

- Before the show each of the panellists were given a form to fill in, which consisted of a list of questions with regards to their health, to which they answered 1-5, 1 being "not at all", 2 "a little bit", 3 "moderately", 4 "quite a lot" and 5 "loads and loads". The form in question was the Whitely test which tries to show if you are a hypochondriac. Amongst the questions were: "Do you worry about your health a lot?" Ross, with his score of 20, is not a hypochondriac (any score between 14 and 28 is not one); Alan is a mild hypochondriac; David is a borderline hypochondriac; and Jeremy, who answered "5" for all the questions and did not bother to read them, is dangerously hypochondriac according to the test. Despite not reading the test, Jeremy does believe he is a hypochondriac. Part of hypochondria occurs when people not expecting to get pain suddenly do get pain and wrongly think it is very serious.

- Tangent: Jeremy went to have a cigarette before show while wearing his high visibility jacket and he thought to himself: "For once I'm not going to get lung cancer because I'm wearing this."

- Tangent: Ross claims the people he feels sorry for the most are goth construction workers, because they would have to wear the high visibility clothing when they normally wear black. Alan suggests that they just need the reflectors. Stephen brings up the subject of emos which leads Ross to suggest an act called Rod Hull and Emo.

- XL Tangent: The Whitely test has a failure rate of plus or minus 11 points. Alan's favourite question on the test was: "If you don't feel very well, do you get annoyed when someone says: 'You look like your getting better?'" Another question is: "If a disease is brought to your attention by TV, radio or newspapers, do you worry about getting it yourself?"

- The panel are shown a pair of bellows with a strange attachment tied to it and are asked how they can use it to safe someone from drowning. The answer is you put tobacco in the attachment, light it, and blow the smoke up the bottom. Between the 17th and 19th centuries, this was standard medical practice. Such bellows were hung along the Embankment in London and along the rest of the Thames. In the earliest days instead of using bellows, one person had to generate the smoke and then French kiss another man who had a blowpipe to direct the smoke down into the bottom.

- The panel are each given another life-saving device and are asked how it helps you. It consists of a pair of paper glasses, like old-fashioned 3D glasses, which have a picture of some eyes in from of the looking into one corner. The answer is they prevent you from being attacked by a silverback gorilla, which do not like be stared at. It is a "Bokito viewer", named after a gorilla in Rotterdam Zoo who got so annoyed by a woman who stared at him and talked to him that he mauled her, biting her about 100 times, breaking many of her bones and nearly killing her. Bokito then went into a café where he caused a disturbance before finally being tranquilised. It should be noted that the viewers were more of a publicity stunt by a health insurance company, as dark glasses would work just as well.

- Tangent: Ross and his friend Mike went to a monkey enclosure in a zoo. Mike stared at a monkey for a long time. The monkey stared back and then licked his tit.

- XL: From a safety point of view the ideal place to put a sharp spike in a car is in the middle of the steering wheel. Most safety measures in cars protect the people in them. However, these measures make the driver more likely to drive recklessly because they think they are safer, and as a result they become more dangerous to other road users, in what is known as "risk compensation". For example, road deaths were already falling at the time when seat belts were introduced in all cars in 1983, but the deaths of cyclists rose. Therefore, putting a spike in the middle of the steering wheel increases the safety of other road users because the driver is much less likely to drive quickly in case they are impaled. The average speed of someone doing this would be about 6mph.

- Tangent: When Ross goes to supermarkets he tries to find one of the "Wet Floor" signs, falls so he lands on the sign, and when people come to help, Ross claims that he tripped over the sign.

- You would stick your finger up someone's bottom if they could not think of seven bald men apart from Yul Brynner to cure their hiccups. One of the many folk remedies to cure hiccups is to get someone to name seven bald men apart from Brynner. In fact the only sure fire way of curing it is "digital rectal massage", which involves putting a finger up the buttocks of the sufferer and moving it around.

- Tangent: If a dog is biting you and will not let go, the best thing to do is put a finger up the dog's bottom and then it will let go. You could also use something like a pen.

- No-one knows for sure how to spell the word "hiccup". The spelling "hiccough" is an erroneous back formation. Previous spellings had "y", "ck" and "hiccop". (Forfeit: Hiccough)

- If someone is having an outer body experience (OBE) they should look out for things towards the top of the room to prove that there was an experience. Dr. Sam Parnia at the University of Southampton has done a three-year-test of 25 hospitals to see if people do have OBEs, which involves putting randomly generated pictures on top of cupboards and shelves. If someone claims to have had the experience, they are asked to fill out a form and say what they have seen. According to the anecdotal evidence people tend to look down and say what they have seen. The results of the experiment are to be revealed 2011 and the doctor refused to tell QI his findings so far. Update: The results of the experiment came out in 2014. Out of over 2,000 people, around 40% of patients hasd some kind of "awareness". This is argued by some to be the first possible evidence of "life after death". Source

- XL: If Jeremy was being mugged by an environmental protestor and the other three panellists where there, it would be more likely they would help them if they were on their own than if the others were watching. According to the "bystander effect", people are much less likely to help someone in danger if there are lots of other people around. One theory for this is that your idea might be dismissed as rubbish by the other people around, so you are frightened of suggesting anything. There is also the fear of legal repercussions from the attacker.

- XL Tangent: Environmentalists have attacked Jeremy in the past. Once he was dressed up as Henry VIII and someone threw a banoffee pie in his face. Jeremy claims that he pointed out to the protestor that she used too much sugar in the pie.

- XL Tangent: Jeremy came across something akin to the bystander effect. He was go-karting with some friends and one of them rolled his go-kart over, covering himself in petrol which then caught fire. There were about 40 people there, Jeremy being very close, and he just stood there doing nothing. The worst thing Jeremy ever experienced, when he was on his own and did want to help, was when he was on a cross-channel ferry during a storm. The boat was rocking and everyone else was being violently seasick. He went to the toilets and looked under the cubical doors where he saw that they were all occupied by people being sick. As the ship rolled a businessman in his suit was on the floor and the sick flowed over his head, and he was sick as well. The man then looked Jeremy straight in the eye and said: "Kill me."

- XL Tangent: In France there is a "Good Samaritan" law which makes it illegal not to help someone if you see a crime taking place. It was brought into force when France was occupied by the Nazis, in Vichy France in 1940.

- XL: A seahorse could get you around London because the part of your brain which helps with directions is named after it. The "hippocampus", which is the taxonomical name for a seahorse is also the part of the brain which helps with direction. It gets its name because the shape of it reminded the first anatomists of seahorses. It is part of the limbic system.

- XL Tangent: The limbic systems helps you sense danger. This was demonstrated by people being blindfolded and still being able to sense when a lion had entered the room.

- XL Tangent: Seahorses are the only fish which have necks. Male seahorses give birth to the young. 25 million seahorses are killed a year for traditional Chinese medicine.

- XL: Hernias are caused by a weaking in the abdominal wall, which could be due to a congenital weakness or by smoking. It is where one part of the body enters another part. Lifting a heavy weight will make it worse and you will feel it, but it is not what causes it.

- Apart from some special circumstances, it is on the whole OK to drink while on antibiotics. The reason why people think that you should not is that when antibiotics was first being used it was to cure syphilis. The patients would still be infectious for the first week, so were told not to drink because they were more likely to have sex while drunk. This has since passed down and has become a "tradition" in a way. The main reason that people are told not to drink when on antibiotics is because doctors prefer people not to drink because it is better for them. However, the are some antibiotics like Flagyl which will make you vomit if you take them with alcohol.

This is the 100th episode of the QI to be recorded (not including the unbroadcast pilot or the compliations which were clip shows) and is regarded by the QI elves as the official 100th episode.

Stephen Fry explains how one might use a small bellows in eighteenth century England.