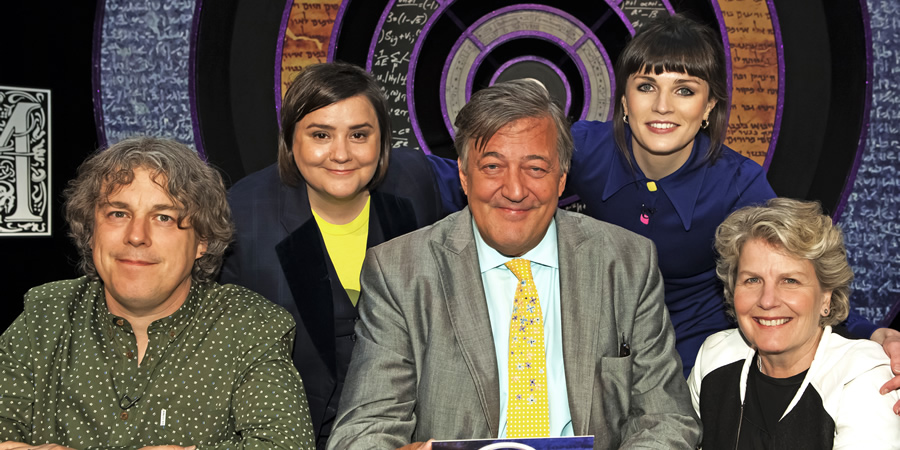 - XL: Before the show the audience were given a challenge in order to test the idea of, "the wisdom of crowds", the idea created by Francis Galton that the more people you have answering a question the more accurate the answer would be. A random selection of the audience were asked to guess how many Smarties were in a large bowl, and then the panel are asked for their guesses which are revealed at the end of the show. The one who is closest gets to be called "Smartie-pants". Sandi guesses 1,500; Susan guesses 1,000 (after originally putting down 6,024,092); Alan guesses 1,966; Aisling guesses 12; and the audience average guess is 2,412. The correct answer is 3,890, so the audience were closest.

- The panel are shown a Biblical image and are asked what the royal figure sitting down did well with his fingers. The royal figure is King Nebuchadnezzar of Babylon, who in the picture is having his dreams interrupted by the Old Testament prophet Daniel. Nebuchadnezzar, like all Babylonians, could count with his fingers, but unlike today where we just count up to 10, the Babylonians counted the finger joints, which meant they could count up to 60 and had a base-12 counting system. This was important because it is thanks to the Babylonians that we have 24 hours in a day, 60 minutes in an hour, 60 seconds in a minute, 360 degrees in a circle and 12 inches in a foot. 24 is useful because it is so divisible, dividing equally by 12, 8, 6, 4, 3, 2 and 1.

- Tangent: Alan asks that if in a room and you put your fingers up to ask for just one or two of something, how do you do it with the Babylonian system, because you would only have to show part of your finger.

- If last night you tossed two heads at the same time - coins that it is, the odds of it landing that way are 1 in 4. There are four possible outcomes: both heads, both tails, the first is heads and the second is tails, or the first is tails and the second is heads. While this is not a difficult maths question, this exact question was given to MPs in 2012, and 60% of MPs got it wrong. There was a divide along political lines: 47% of Conservative MPs got it wrong, and 77% of Labour MPs got it wrong. (Forfeit: 1 in 3)

- XL Tangent: Jeffrey Hamilton, professor of mathematics at Warwick University, gave a lecture about probability in the 1970s in which he tossed a coin in the air, but the coin fell from his hand, rolled across the lecture theatre, and landed on its edge.

- XL Tangent: When the public where asked the same coin toss question the MPs were given, 74% of the public got it wrong.

- XL Tangent: The A&E Company, the rival to McDonald's, introduced a third-pound burger, and while people preferred it to the McDonald's quarter-pounder it still failed because people thought that a third was less than a quarter and mistakenly thought they were being cheated.

- XL Tangent: 9 out of 10 American high school graduates think that Joan of Arc was married to Noah.

- Tangent: Stephen and the panel perform an improbable trick. All five of them have a deck of cards, which they shuffle. They then put all the cards into a clear plastic bag, and take out one card from the bag without looking at it, holding the card close to their chest so it is visible to camera. They then turn all their cards to reveal that they all got the same one, the six of clubs. The chances of this happening are around one in two billion.

- There are animals that count. These include monkeys, chicks, pigeons, parrots, raccoons, ferrets, rats, salamanders, honeybees and apes. They can count, add and subtract. Rhesus monkeys at Colombia University have been shown that they can arrange up to nine objects in the correct numerical sequence. Crows and parrots can count up to six. Cormorants can count up to seven, and this is known because Chinese fishermen use cormorants. They put a ring around their throat so they cannot swallow the fish themselves, the birds catch fish and then dump on the ship's deck. Once they get to seven, the ring is taken off and the cormorant can catch its own fish.

- Tangent: There was a bear in Regent's Park Zoo in the 1920s that was fed biscuits by the general public. On Mondays the biscuits were half-price, so it got lots of biscuits on the money and on Tuesdays the bear would have the day off.

- XL Tangent: Birds relatively have tiny brains so you would not expect them to be so clever, but yet some primates have very big brains but do not display any greater intelligence. However it appears intelligence has nothing to do with brain size. Sandi was once in the desert and came across ants that could use their shadows and the angle of the sun to work their way back to their nests, which means that ants can use some primitive form of trigonometry.

- XL Tangent: One in ten of the people who work on Wall Street have psychopathic tendencies.

- XL Tangent: William Goldman said that in Hollywood films people "follow the money", in the sense that if a film features a suitcase full of money the viewer's eyes always stare at the suitcase and follow it.

- XL Tangent: Money is used to test people who are pretending to be blind. The person carrying out the test will wave a £50 note and the subject cannot help but look at it. Cheaper notes will not work. Instead of using money, one optician stuck a post-it note to his head saying: "go fuck yourself" in order to test people.

- XL: The illegal substance that can be found in the pockets of most of the audience is cocaine, because over 99% of banknotes have trace amounts of it.

- XL Tangent: There was a hotel in New York were the concierge washed coins if you thought they were dirty.

- The thing that moon-starers do and why they call themselves that is because they are astronomers and they use anagrams to both share and yet hide their discoveries, however it should be pointed out that strictly speaking "moon-starers" and "astronomers" are not anagrams, but aptagrams, which is where the words not only share the same letters but their also roughly have the same meaning. Other aptagrams include "Apple Macintosh" and "laptop machines", or "semolina" and "is no meal". The most famous example of an astronomer using an anagram was Galileo, who wrote a Latin anagram to his friend and rival Kepler, about how he believed he discovered new moons orbiting Saturn, when in fact he discovered Saturn's rings. The anagram was: "smaismrmilmepoetaleumibunenugttauiras", which when arranged correctly said: "Altissimum planetam tergeminum observavi", which in English is: "I have observed the highest planet to be triplets."

- Tangent: Once a month in Reykjavik the government turned out all the street lighting and then there would be a lecture on public radio about the stars that were visible.

A dozen plus a gross plus a score,
Plus three times the square root of four,
Divided by seven,
Plus five times eleven,
Equals nine squared plus not a bit more.

This limerick was created by a man named Leigh Mercer. Another interesting pair of sums is 12+1=11+2, because these sums are anagrams of each other: "twelve plus one" and "eleven plus two".

- The biggest mistake anyone has ever made with a pencil is making pencils with inscriptions saying that children were: "too cool to do drugs", but when they were shaven down later read as, "cool to do drugs" and "do drugs". These pencils were given to children in New York in 1998. Other mistakes include at time in 1945 the Arkansas legislature accidentally repealed all their laws at once, because they had an act with the words: "All laws and parts of laws, and particularly Act 33 of the Acts of 1941, are hereby repealed." Another mistake occurred in 2003 when the German agency for TV licences sent a series of reminders to St. Walpurga to pay her licence fee. St. Walpurga died in 777. Yet another mistake occurred in the Australian Morning Bulletin which printed a correction concerning a story when: "more than 30,000 pigs were floating down the Dawson River." What the owner of the piggery actually said was: "more than 30 sows and pigs were floating down the Dawson River."

- XL Tangent: The Pencil Museum in Keswick includes a hall of famous people and their pencils. Donations come from amongst other people Phill Jupitus.

- XL Tangent: Other famous mistakes including one in France in 1992, where volunteers cleans some graffiti in a cave, but they also ended up cleaning away some 15,000-year-old cave paintings. Aisling talks about two examples of two mistakes in Irish law that occurred in a single week. One mistake made drugs legal for 48 hours. Another mistaken, when translating the Marriage Act from English into Gaelic, forbid marriage between a man and a woman and made all marriage illegal.

- A failure to sell mirrors massively improved modern media because this particular failed mirror salesman was Johannes Gutenberg, who then went on to invent the printing press. At the time, people went on pilgrimages to see relics, but they were so popular that when you got to your destination you could not get close to it, so Gutenberg had a failed business selling boxes with mirrored lids, so the image of the relic would be reflected on the mirror, shone down into the box, you closes the box and then you would leave believing that your box contain the image of the relic. Gutenberg made these mirrors for Aachen, whose relics included the Virgin Mary's robe from the night Jesus was born, Jesus's swaddling clothes, the cloth John the Baptist's head was wrapped in after his execution, and the loin-cloth Jesus wore on the cross. After failing to sell any of his mirrors, Gutenberg returned to his hometown of Mainz, where in 1450 he invented his printing press. Unfortunately for Gutenberg, the people who funded the press took all the money and Gutenberg died penniless in 1468.

- Tangent: One of the first British printers was called Wynkyn de Worde. There is a Wynkyn Society named after him.

- Stephen uses a machine to prove that square of the hypotenuse on a right-angled triangle is equal to the sum of the squares on the other two sides. However, while it is named after Pythagoras, the theorem named after him is much old, and is referenced by Euclid. The model Stephen uses is a container full of red liquid and the three square holes around a right-angled triangle. The liquid is in the largest square and tilting the machine pours the liquid equally into the other two holes. (Forfeit: Pythagoras)

- XL: By end of Elizabeth I's reign there were an extraordinary number of dukes, and the panel are invited to name one. The problem is that the reason why the number is extraordinary is because there were number of dukes was zero. The number of peers at the time of Elizabeth I's death included one marquis, 18 earls and 37 other peers. One peerage jokes dating to Elizabeth I's reign was written in the diaries of John Aubrey, concerning the Earl of Oxford, who some people thought wrote the works of Shakespeare. Aubrey wrote: "This Earl of Oxford, making his low obeisance to Queen Elizabeth, happened to let a fart, at which he was so abashed and ashamed that he went to travel seven years. On his return, the queen welcomed him home and said, 'My Lord, I had forgot the fart.'" (Forfeit: Norfolk; Cambridge; Hazzard)