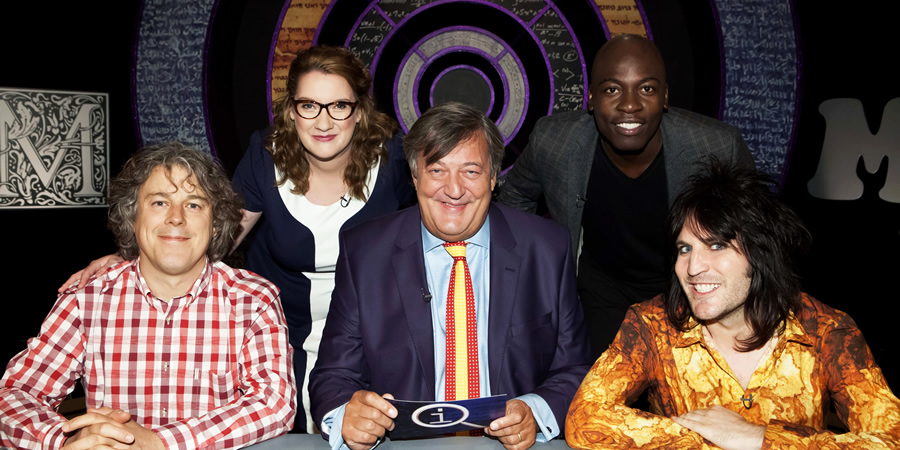 - This is a "General" show from Series M, covering a wide range of different topics beginning with "M".

- The panel are all given buzzers that sound like things that cause a mess, like plates smashing or a wall being knocked over. Alan's buzzer is of a crowd cheering when footballer Lionel Messi scored four goals against Arsenal in April 2010, the football club Alan supports.

- The panel are shown a string of obscure words beginning with "M" and are asked to define them. The full list is at www.quiteinterestingmwords.com:

- Maness: A woman. This word dates back to Tudor times.

- XL: Moley: a razor concealed in a potato, often used as a weapon by 1950s razor gangs.

- Munge: To wipe someone else's nose.

- XL: Mugwump: a political turncoat, originally used to describe Republicans who defected to the Democrats in the 1880s. Comes from the Algonquin Indian language.

- Mytacism: Excessive use of the letter "M".

- A politician with raw animal magnetism was William Pitt the Younger, according to Samuel Taylor Coleridge. The phrase "animal magnetism" was coined by Franz Mesmer, the father of hypnotism who falsely claimed he could control the magnetic fluids in people. He is also where we get the word "mesmerism" from. Coleridge insulting described Pitt the Younger has having animal magnetism because of the way he was able to control people. Among the people who believed Mesmer include Coleridge, Marie Antoinette, Edgar Allan Poe, Wolfgang Amadeus Mozart, Charles Dickens and Sir Arthur Conan Doyle.

- Tangent: Dickens tried to practice mesmerism on a friend, Madame de la Rue, on a train with Dickens's wife. While trying to mesmerise de la Rue he heard his wife's muff dropping on the ground, and Dickens had hypnotised his wife by accident.

- Tangent: In France there were Royal Commissions into mesmerism, set up by Louis XVI. This was the first placebo-controlled trial in history. They rules that it had no basis in fact, but people still believed it.

- XL: The panel listen to some distorted speech and are asked to interrupt it. They don't at first understand it, but once they hear the speech undistorted they can make sense of distorted speech. What is actually played is: "The saying 'blue whale' - that's bound to come up eventually."

- The most inappropriate thing beginning with "M" that has been kissed by the Pope is a merkin, which is a pubic wig. 17th century English highwayman Captain Dick Dudley had fled to Rome and bought a dead prostitute's merkin from an anatomist. He dried it, combed it out, and then sold it to the Pope, who would have been either Clement X or Innocent XI, claiming that it was part of St. Peter's beard. The Pope put it on his mouth, kissed it multiple times, paid 100 ducats for it, and then Dudley fled before anyone discovered they were conned.

- Tangent: Pubic wigs exist in England as far back as the 14th century. They were mainly worn by women who lost their pubic hair due to syphilis.

- The thing that Marie Antoinette kept in her muff was a dog. Muffs used to be worn by men and women. Louis XIV had muffs made out of tiger, panther, otter and beaver skins. Samuel Pepys wrote in his diary: "This day I did first wear a muff, being my wife's last year's muff." When he was imprisoned in the Bastille the Marquis de Sade had letter that were smuggled to him by his wife, who hid the letters in her muff. Celestine Galli-Marie, the first woman to play Carman, kept a marmoset in her muff. (Forfeit: Cake)

- A meteorology question: the man who invented the weather forecast thought that the reason the dinosaurs died out was because they were too big to fit onto Noah's Ark. Robert FitzRoy, who was most famous as the captain of HMS Beagle, invented the idea of weather forecasts but no-one liked the idea, but people really did believe his theory on the dinosaurs. FitzRoy did not believe in Darwin's theory of evolution. Twenty years after the Beagle, FitzRoy wrote a weather forecast for The Times which read: "Moderate, westerly wind, fine." The word "meteorology" comes from the Greek for things that are high up.

- XL: The weekend starts during the Industrial Revolution. For 300 years before this there was St. Monday, where workers did not do any work on Monday. Factory workers adapted this by taking Monday off, and anyone who did turn up for work on Monday normally got sent home because there were not enough people to run the factory. The weekend was introduced by managers as a compromise, by giving them half of Saturday off. Because of this football took off because the factories would empty and the workers would go and see the match. Also Saturday became the day for drinking, because you could not drink on Sunday for religious reasons, or during the working week. Slowly all of Saturday became free. (Forfeit: Here)

- XL Tangent: Stephen finds it annoying when historians use the present tense to describe the past, like saying that World War One starts in 1914. Alan finds it annoying when columnist says something like: "To the awards at the Dorchester..." Other annoying journalistic phrases they bring up include "caught up", as in "I finally caught up with him in the rehearsal rooms..." Alan gives an even worse example, when he was interviewed by a journalist who was accidentally late. Alan asked him: "Are you going to have enough? You've got to write quite a lot." The journalist didn't know, so Alan said that if the journalist wanted to ask anything else he should just give Alan a ring. The journalist rang the next day, left a message, and Alan rang him back. When the article was published it read: "A few days after this interview, Davies calls me..." Alan is still angry about this, even though the interview was 15 years ago.

- XL Tangent: In "The Ragged-Trousered Philanthropists" by Robert Tressell, the title characters work six days a week and only have one day's holiday off a year. They go on a beano to Margate.

- Stephen inhales loudly a few times and asks the panel: "Yes or no". The answer is yes, as spoken by the people of Umea, Sweden. There is debate about whether there is a universal way of saying yes and no. In most cultures people nod for yes and shake their head for no. One theory suggested is that when people are fed as babies, if they do not want the food they will move their head to the side, but if they want the food they will move their head forwards.

- Tangent: Stephen asks Eddie if nodding and shaking of the head also occur in Eddie's native country of the Democratic Republic of the Congo. Eddie says that he had a friend from Ethiopia who was at a restaurant, pointed at a list of food and asked: "What foods do you have?" The reply the friend got was a squeak, which meant "Yes", in that everything on the list was available. In Africa in general, including Congo, use sound effects for words. For example, if your mother went, "Ah-ha!" that meant she was agreeing, but when she says, "Ah-ah!" that mean she does not want anything.

- XL Tangent: According to Darwin, Abyssinians said "no" by jerking their head to the right shoulder and making a slight cluck, and said "yes" by the head been thrown backwards and the eyebrows raised an instant. In Bulgaria, shaking you head means "no" and nodding means "yes".

- XL: You never see a mongoose and a rat together because mongooses are awake during the day and rats are awake at night. In mid-19th century Hawaii there was a rat infestation which they tried to solve by sending in mongooses, but it failed and had a mongoose infestation as well, resulting a fall of the bird population. The people of Samoa were also about to bring in mongooses as well to control their rats, but a Hawaiian resident was able to warn them in time, so it did not happen. (Forfeit: They're the same person)

- XL Tangent: One bird Hawaii is keen that has not thrived in their state is the hummingbird, because while hummingbird are good at pollinating pineapples, their pineapples do not taste as good as they are filled with seeds and are less juicy. Sarah once ate a whole pineapple.

- The thing you can learn from a meerkat is to fight off scorpions. Meerkats are one of the few animals to teach their young, using lessons that get harder as they go along. Their first lessons will involve fighting a dead scorpion, then they move onto scorpions without a sting, and then to a scorpion with a sting. Meerkats are a kind of mongoose.

- XL Tangent: Ants also teach their young. They practice tandem running, where a leader directs the pupil to a food store. The leader adjusts its speed, even though it means they get to the food four times as slowly. They also count up their strides to know how far they have travelled.

- The only way you can be sure of knowing the age of a tree is to know when it was planted. There are some years in which trees do not grow rings and others when they grow more than one. Thus rings only count as a rough guide. (Forfeit: Count the rings)

- XL Tangent: In 2012 the oldest seed in the world was discovered and germinated. The seed was 32,000 years old, found 30m below the Siberian ice in a fossilised squirrel burrow. In 2008, a 2,000-year-old seed grew which sprouted into a previously extinct date palm.

- The Sun is coloured white with a hint of turquoise, as it emits a slightly higher amount of turquoise photons than any other colour.

- XL: Agoraphobia is the fear of any kind of space you don't like. Therefore claustrophobia is a form of agoraphobia.

- XL Tangent: Phil Brown once said on live radio: "Why does Andrea Pirlo not leave Italy and play in the Premier League? Why does he want to stay in Italy? Is it because he's homophobic?" Brown thought people who were homophobic were scared of leaving home.

- XL Tangent: According to the Stress Management Centre and Phobia Institute in North Carolina, 80% of high-rise buildings in America do not have a 13th floor.