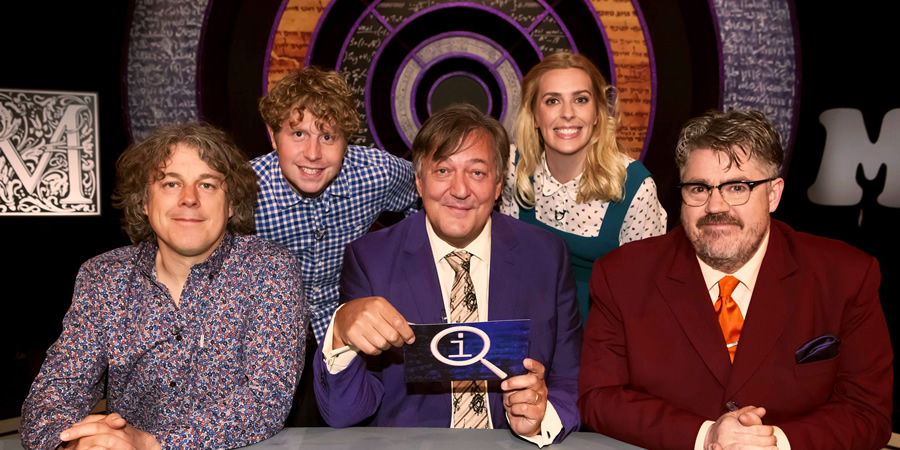 - The panel are given some cards displaying the top and the bottom half of various creatures, including lions, fish, ants, bulls, a woman, and Alan. They are asked to mix and match the cards in order to create a monster. For example, mixing the top of the woman with the bottom of the fish to make a mermaid, or the top of the bull and the bottom of a man to make a minotaur. Phill and Sara create a lionfish, which is a fish that does actually exist, and which bounties on them in the Caribbean because they destroy habitats so much. The merlion, a lion head and a fish tail, is the national symbol of Singapore. The myrmecoleon or formicaleon is a lion head on an ant body, which was believed to exist in medieval times. The hippocampus, which is the seahorse-shaped part of your brain, was also a mythical creature, with a horse front and a fish tail.

- Tangent: Seahorses are the only species known where the male gives birth. At the London Aquariums the seahorses swim up and down a long, thin tank.

- The panel are shown the picture of a monster and are asked what it is made from. It looks like a fish tail attached to the body of a small baby or monkey. It is a Fiji mermaid, which was popular in the 19th century, and was normally made from fish and other household bits and pieces, although it was believed that they added on a monkey's head. The one in the picture was acquired by the Wellcome Collection in 1919, and later by the Horniman Museum. However, Stephen produces the actual Fiji mermaid that have shown in the picture, which was actually produced by 3D printing, using CT scans, by Dr. James Moffatt of St. George's University, London.

- Tangent: Monsters in Josh's native Dartmoor include the Hairy Hand, which was a disembodied hand that would appear from nowhere if you were driving along the B3021, and it would steer drivers of the road. The rest of the panel suspect that this is an excuse for drunk-driving. One victim claimed that the hand was invisible. Correction: In Series N, Episode 9, Noel, it was reported that the road the hairy hands haunt was actually the B3212.

- Tangent: Alan puts his hand on the desk palm upwards. He says it is a dead version of his fingers crawling along the desk like a spider. He claims that this is a heard of just tapping your finger on the desk.

- Tangent: Jenny Haniver are skates that have been carved into a spear-like shape, which was mainly done by sailors from Antwerp.

- XL: The mammoth moles of Siberia were originally thought to have lived underground, although they are actually woolly mammoths. The word "mammoth" comes from the Estonian for "earth mole". The last mammoths were alive 4,000 years ago, around the time the Great Pyramid of Cheops was 1,000 years old. A company called Revive and Restore is planning re-introduce mammoths by performing genome editing with Asian elephants. It is hoped that the mammoths could help improve the environment by improving permafrost, which consumes large amounts of carbon. Sergey Zimov has created an experimental reserve in Siberia named Pleistocene Park.

- The panel are shown a picture of a skull featuring lots of sharp, pointed teeth, including one central one, and are asked what creature it is. It is the skull of the star-nosed mole, a mole that can smell in stereo, and have toxins to paralyse their pray to eat later. The star-nosed mole can dig 150 feet of new tunnels a day, the equivalent of a human moving four tonnes (about 1,000 shovel loads) every 20 minutes.

- XL Tangent: Female hyenas have penises, which they give birth through. They body has to put them to sleep in order to give birth.

- The names of the Monstrous Regiment of Women were Mary I and Mary of Guise, regent of Mary Queen of Scots. It comes from the book The First Blast of the Trumpet Against the Monstrous Regiment of Women by John Knox, a Protestant writer attack these female Catholic monarchs. "Monstrous" at the time meant "unnatural", while "regiment" meant, "regime".

- Tangent: The husband of Mary Queen of Scots, Darnley, was murdered in an explosion. One of the presumed architects of the explosion, Archibald Douglas, left a pair of shoes at the scene of the crime, got away with the crime and later wrote an account of Mary's reaction. "She sent for a number of light ladies and women to come to Holyrood House and participate stark naked in a ball. Then they had cut off their pubic hair and had put it in puddings to be eaten by the male guests, who were sick." The person who took the wrap for the murder, and thus was hung, drawn and quartered, was the man who discovered the crime scene. His name was William Blackadder.

- Out of a foetid parachute and a hairy nuts disco, neither one is nastier than the other really. Both of these are just mushrooms. Other strange names for mushrooms include pink disco, greasy bracket, powdery piggyback, white brain, jelly ear, Verdigris navel, fragrant funnel, cinnamon jelly baby, witches' butter, slimy earth tongue, hot lips, twisted deceiver, bog cannon, and gassy night. In September 2014, mycologists from Kew Gardens analysed the DNA of a supermarket packet of porcini mushrooms, and found three species completely new to science. The Latin names for these new mushrooms translate into English as white beef liver, delicious cattle, and edible. 1,200 new species of fungi are discovered every year, and they may account for 25% of Earth's biomass. Mushrooms used to be the biggest non-animal creature on Earth. When trees and plants were no taller than three feet, mushrooms were much larger and more phallic.

- XL Tangent: In Japan there is a disco where the women don't wear underwear, dancing on a glass floor, while men pay to be underneath the dancing. A friend of Sara's said that it could not be down with men because it would look like everyone was waving at you.

- XL Tangent: The Trichoderma fungus bumps into other species, grabs it using thin tubes named hyphae, and squeezes food out of the other species. Meanwhile the Sulphur Tuft releases chemical agents.

- XL: If Frankenstein's monster came to dinner, you should offer him a vegetarian meal. Author of Frankenstein Mary Shelley, and her husband Percy, where two early pioneers of vegetarianism. In the novel the monster says: "My food is not that of man. I do not destroy the lamb and the kid to glut my appetite. Acorns and berries accord me sufficient nourishment."

- XL Tangent: Percy Shelley died by drowning, only recognisable due to a copy of Keats he had on him. His friend Captain John Trelawny found the body, cremated it, and found that Shelley's heart stayed whole. Trelawny grabbed the heart, burning himself badly, and gave the heart to Mary who kept it for 30 years. However, some people think that it was actually his liver, not his heart.

- XL: The way that Alan should get rid of the horrors under his bed is to use a spray. Parents can give the children a spray and tell them that when they use it, it scared away bogeymen and other such creatures. Some evolutionary psychologists believe that the reason children refuse to go to bed is a sensible thing, because they do not want to be alone in the dark.

- XL Tangent: In Hungary there is a monster called Rezfaszu bagoly, which in English means: "the copper-penised owl". The monster is a threat to children, who will get children if they do not do what their mother tells them.

- XL Tangent: Some research shows that children who play a lot of computer games can control their nightmares and fight back.

- XL: You keep a blue man happy by saying some pleasing poetry. The Blue Men of Minch, also known as Sea Kelpies, were monsters that lived between the north-west coast of Scotland and the Hebrides. They lured sailors and caused storms, but you could live by them should out two lines of poetry and you replying with two more lines which rhymed and that pleased them. One example is: "My men are eager, my men are ready, to drag you below the waves. My ship is speedy, my ship is steady, if it sank, it would wreck your caves." A theory as to why they are blue is because the Latin for paint is "pictum", so they were Picts.

- XL Tangent: Sara once auditioned for the Blue Man Group, but was unaware that candidates had to be male and over 6'5".

- Great white sharks seem to bite people out of curiosity. If they attack a seal it is normally an eating frenzy until there is nothing left, but when they bite humans it is normally one bite and then they swim away.

- The biggest face in America is the unfinished statue of Crazy Horse on Mount Rushmore, which is 15 miles away from the faces of George Washington, Abraham Lincoln, Thomas Jefferson and Teddy Roosevelt. The face is 87 feet high, depicting him sitting on his horse, and has been carved by one old Polish man. Crazy Horse is most famous for winning the Battle of Little Bighorn. When carving the presidents faces, they used dynamite to within 4 inches of accuracy. Originally the faces on Mount Rushmore were going to be the explorers who opened up the American West named Lewis and Clark, alongside Chief Red Cloud and Buffalo Bill. (Forfeit: The Presidents on Mount Rushmore)

- The largest single man-made structure on the planet is the Great Earthworks of Benin in Nigeria. It was a defensive structure built by the Edo people, that was later partly destroyed by the British who sacked and burned Benin in 1897. It was originally 10,000 miles long, which is four times longer than the Great Wall of China, consumed 100 times more material the Great Pyramid of Cheops, took 700 years to build and an estimated 150 million hours of digging. However, it could be argued that the Eurasian road network is larger, as it extends from Portugal in the west to Siberia in the east.

The panel chat about the blue men of the minch who would lure ships to their doom in mythology.