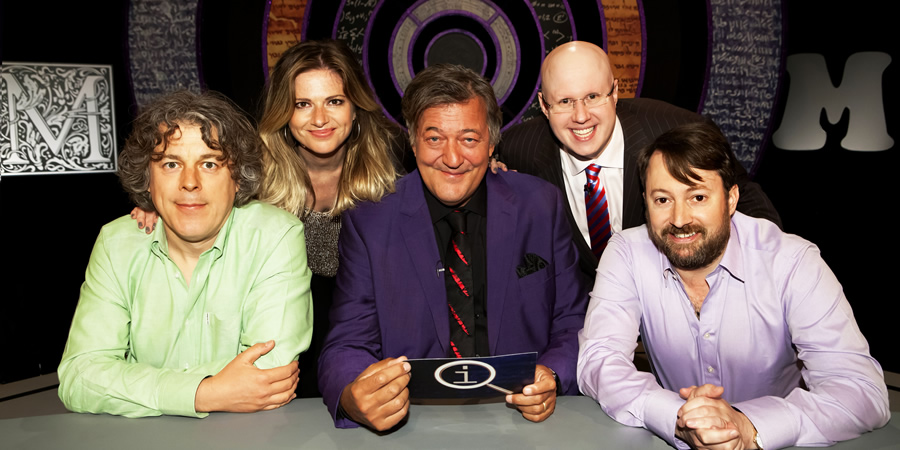 - The panel are shown a word cloud and are asked which of things mentioned they did not have in the middle ages. The phrases are "Official commemorative merchandise", "Pre-fabs", "Sweet and sour sauce", "Greeting cards" and "Iron maiden". The only one that did not exist was the iron maiden (both the torture implement, and the band). The idea of a metal sarcophagus with metal spikes inside it was not imagined until 1793, when archaeologist Johann Siebenkees wrote a hoax account of one. About a century later a man named Matthaus Pfau had one installed in his Swiss castle in Kyburg as a visitor attraction. All the other items in the word cloud exist:

- Greeting cards: Single-sheet wood cuts from the mid-15th century have been discovered. These have pictures on them and sometimes have inscriptions wishing someone a very good year.

- Sweet and sour sauce: Known as "sour sweet" or "Egurdouce", it used vinegar, sugar, cinnamon, orange, onions and currants. Onions contain more sugar than sugar beets, so long as you cook them.

- Pre-fabs: Invented by the Vikings. When they invaded Orkney they found there was nowhere to live, so they left and came back with supplies on the longboats including prefab houses.

- XL Tangent: Recent adverts for Ikea have the name of the store pronounced "ickier". Matt says that can fick off.

- Official commemorative merchandise: People would pay for relics. At the site of the murder of Thomas Becket people originally could buy blood, but it soon ran out so it had to be diluted. Later people could buy little swords.

- Tangent: During the Spanish Inquisition people were tortured by having a spike stuck up their anus, which would miss all their vital organs and come out of the victim's shoulder. The victim would then be publicly displayed.

- Tangent: Matt says that onions are not that sweet, saying that you should never put onions next to Mini Milks in the freezer others the Mini Milk would have an oniony taste. Stephen however does not know what a Mini Milk is. When Matt compares them to a Sparkle Stephen still does not know what Matt means. Stephen says he had Mivvies as a child, but now he has grown up.

- "The wickedest, the silliest, the most insane and the most disastrous book in the world literature" is Malleus Maleficarum, known in English as The Hammer of Witches. It was a textbook designed to find and destroy witches. When this book was released in the mid-15th century the Church banned belief in witches, so there were no witch burnings or executions at the time. However, because the book became so successful movement for track witches down slowly grew. Thus this book led to the deaths of thousands of women. Among the claims made in the book they included the idea that witches dispossessed men of their penises, put the penises on a tray, and the penises would wonder around of their own, eating oats and corn. (Forfeit: The Da Vinci Code)

- Tangent: One theory concerning the idea that witches flew on broomsticks came from ergot, a fungus that grows on rye which has hallucinogenic properties. One way of taking ergot was as a suppository, where you rubbed a broomstick in ergot and take it anally or vaginally.

- XL: The thing that old Mummy Pettigrew did was unwrap Egyptian mummies in public. Thomas "Mummy" Pettigrew was a 19th century anatomist would invite people to see a mummy being unwrapped. People would pay to attend, and the more you paid the nearer you could see the performance. Another Egyptologist, George Gliddon, proudly unrolled the mummy of what he claimed to be a princess in 1850, but as he unrolled it a penis was revealed. These events were so popular that on one occasion, the Archbishop of Canterbury was pushed out of a mummy unrolling because the press and crowds we so large he could not get a decent view. One of Pettigrew's fans, the Duke of Hamilton, asked Pettigrew to mummify him when he died. He did so, but the size of the sarcophagus was wrong, so the duke's feet had to be sawn off so he could fit in it. The most northerly place where mummies have been found is Barnsley, where Egyptians in Roman legions were mummified. People of all classes would be mummified. As well as the Valley of the Kings there was also the Valley of the Artisans and Artists, which contains the mummies of the people who built the tombs of the pharaohs.

- The way to get a whole row of seats to yourself on a Virgin Airways flight is by dying. Normally, if someone dies on a plane the procedure is turn back if possible and return to where you took off, but if you have travelled to far already then you continue with your flight. British Airways have about 10 deaths a year in flight, for 36 million passengers. If you extrapolate out to the 3.5 billion passengers who fly a year, then that means on average 1,000 people die in flight across the globe. Different airlines have different ways for dealing with deaths. For example, Singapore Airlines have a corpse cupboard. If you die on a British Airways flight you are moved to first class. One long established steward said: "Many years ago we used to give them a vodka and tonic, a Daily Mail and eye shades, and tell the passengers they were fine. We don't do that anymore." Stephen approves of this being scrapped - as he hates the idea of being given a copy of the Daily Mail.

- XL Tangent: The first airline stewardess was Ellen Church, who was employed in 1930 by United Airlines, and was given the job because she was not allowed to fly the plane herself. She and the other original stewardesses where all nurses and were originally called "sky girls". Their duties included screwing down loose seats, helping to fuel the plane, and pushing the plane into its hanger at the end of the journey.

- XL Tangent: David says it is a bad idea to sell scratch cards on plane, because you do not want to sell something where your chances of winning it are more remote than the chances of the plane crashing.

- XL: The panel are shown a photograph of a man and are asked how he would make your mouth water. The man in question is Ivan Petrovich Pavlov, who got dogs to salivate for food using a metronome, and not a bell. Pavlov was able to demonstrate how sophisticated a dog's hearing was, such as distinguishing rhythms of 96 and 104 beats per minute. Thus Pavlov gave 104 beats per minute on a metronome and there would be no food, then 96 beats per minute on a metronome and there would be food. Later, when Pavlov set the metronome at 96 beats per minute the dogs would immediately salivate. Pavlov also tried ascending and descending musical scales. While the followers of Pavlov used bells, Pavlov himself didn't, which is fitting as in 1904 Pavlov was the first Russian to win the Nobel Prize. He won his prize for medicine and his work on digestion. To celebrate he sold the gastric juices of his dogs, which he would collect by sticking a catheter into a dog's stomach. (Forfeit: Ring a bell)

- The thing that is dense, slimy, lives at the bottom of the sea and is called Matt (rather than David Walliams) is a mat of microbes that photosynthesise so much they are responsible for our oxygen-rich atmosphere. They eat hydrogen and breathe nitrates. The largest known one is the size of Greece, and is off the coast of Peru and Chile. The total weight of microbes in the ocean is the same as 240 billion African elephants. That is the same as having 35 African elephant-sized piles of microbes for everyone on the planet.

- People used to have their dirt-holes burgled without their knowledge. Human faeces used to be a profitable item, and like any item with a value people will want to steal it. This occurred in the 18th and 19th centuries, when people would have holes filled with rubbish and people paid to take away the rubbish from people. These included "flying dustmen" who paid to collect the dust from people. Even dead animals had a value. For example a white cat cost sixpence, while a multi-coloured cat was fourpence. They had "software" such dead animals, and "hardware" like broken crockery and oyster shells that could be used by road builders.

- XL: The heinous crime that was committed by Baby-Face Bertillon was nibbling at all the pears in a basket. The Bertillon System, as once described by Sherlock Holmes, was the first known example of using mugshots to help solve crimes. Bertillon took photos of his son Francois, and discovered that ears are very useful in identifying people, so therefore you need both the view from the front and from the side. This was later adopted by the French and the British police.

- Monk's earwax could be used for their manuscripts. A substance called glair to illuminate their manuscripts which tended to form bubbles, but adding earwax to it stopped the bubbles from forming. You can test this yourself by putting a bit of earwax on a foaming head of a pint of beer, as the oil in the earwax will make the head collapse. One common aspect that reappears in medieval manuscripts includes depictions of knights fighting snails or comments written by the monks complaining of the cold.

- Tangent: Matt suggests that most missionaries are in Utah, where the Mormon church is based, and missionaries that have not yet been sent out to their destinations are based there. Stephen say this is not the right answer as he is looking for the country that takes the most missionaries in, but Matt still insists his answer is right because Utah is in the USA. Stephen gives Matt points for "sheer tenacity".

- XL Tangent: In 2003 the residents of a village in Fiji apologised to the family of an English missionary who they ate in 1867, as they thought that this act had caused them bad luck ever since. They hoped apologising would change their fortunes. The following year there was an earthquake.

Which country has the most missionaries?

Matt Lucas answers his own question rather than Stephen's.