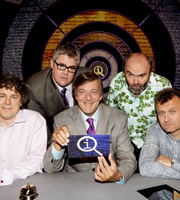 - This is one of the "General" shows in Series G, covering a wide range of different topics beginning with "G".

- "A gentlemen of three outs" is "a gentlemen without manners".

- "Grog blossom" is "a spot caused by drunkenness."

- A question on "Gaffs": Captain Karl-Adolph Schlitt's number two sunk his own U-Boat because he did not work the flush properly. Lavatory flushes on submersible vessels are very complex to prevent water getting into the craft and therefore making the craft sink. As a result, you had to have special training to use the flush on a U-Boat. In Captain Schlitt's U-Boat, U-1206, on 14th April 1945 (just before the end of the war), Schlitt used the lavatory. He claimed it was faulty and the flush did not work, although others claim he did a very big poo and was too embarrassed to ask for help. Whatever happened, the result was that Schlitt filled the U-Boat with sewage and water because he got the flush wrong. The water leaked into the acid batteries powering the U-Boat, creating toxic chlorine gas. As a result, the U-Boat had to surface. When they were visible, the navy spotted them and blew them out if the water.

- XL: There are lots of different ways of getting up in the morning. Apart from your bog-standard alarm clock, one method practiced in public schools is to bang your head on the pillow a few times. For example, if you bang you head on the pillow six times, you would wake up at six. Sleep researches say it does not work however, because you are actually not sleeping, but looking at your watch so you know what time it is. Other methods involving using a cockeral or drinking a lot of water the night before (this was used by the Native Americans). There are also a range of more unusual alarm clocks. Examples include one by MIT which runs of and hides when you press the "Snooze" button. Another alarm clock is in the shape of a dumbbell which will not stop until you do 30 reps with it, so it wakes you and gets you fit. Another alarm clock has a function by which every time you hit the "Snooze" button you donate money to a political cause you hate.

- XL Tangent: Phill used to leave his radio on the BBC World Service overnight so he would wake up naturally. However, as he listened to the news on BBC Radio 4 on the way to work the next day, he thought that he had dreamed the news the night before, and for two days thought he was psychic.

- XL Tangent: 20% of people say they find it difficult to get up in the morning because they work late.

- XL Tangent: When Andy lived in a house in Hernhill, his bedroom was at the front of the house. He was always woken up by the binman who sang "Don't Cry for Me Argentina", but always got the last note wrong.

- The panel are shown examples of each others handwriting and are asked to find out whose it is. Stephen then reads out statements about what their style of writing means about them. This is an example of "Graphology", the study of reading character traits through handwriting. This study has since been debunked as nonsense. It cannot be used in court (even in America). However, forensic graphology is allowed, in which you show that someone wrote something. According to a graphologist:

- Andy is a logical, systematic thinker, because his handwriting is mostly joined up. Some words are more spaced than others, so it shows he is open, honest and deep in thought. Also sociable because of the forward slant to the right in his writing.

- Alan is unstable (shown by the close lettering) and sometimes does things without thinking (not all letters are joined up).

- Hugh's flowing handwriting is rather feminine, most of the letters are joined up showing he is artistic and intuitive. Self-control, egotism and coldness are also shown because of the up-right nature of the writing.

- Tangent: 3,000 British businesses heir graphologists so they can study the handwriting of potential employees.

- Tangent: Andy once did a handwriting test to become a French train driver. His friend's father was a psychologist for SNCF. The test involved holding the pen with a rubber ring on it in your wrong hand, and tracing over the writing on the paper. If the writing drifted upwards it showed you were assertive or possibly too aggressive. If it went down, it was considered passive.

- XL Tangent: Another part of Andy's exam involved pressing pedals depending on colours and you would hear a hooter if you got it wrong. You did this for 15 seconds and then they sounded the hooter anyway, just to see if you went to pieces or not.

- XL: The Goldilocks effect is a way of getting people to pay more for things by making people think the price is just right. For example, out of three objects, one pieced a lot, one very cheap, and one in the middle, most people go with the mid-priced object. A good example is aeroplane tickets. People think business class is a bargain compared to first class, but compared to economy class it is about seven times more expensive.

- XL Tangent: Alan was once told by the runner Steve Cram that companies have to make trainers with are deliberately very expensive because some people will buy them. If one company does not, the others will do so and will make the money. According to Cram, about 10 years ago, once trainers reach £60, the quality is the same for most of them after that, and you are just giving the company money. This is known as prestige pricing.

- XL Tangent: Other Goldilocks things include the Goldilocks zone, which is the place in a another solar system where it is possible for a planet to have water and therefore life.

- The Irish Police - The Garda - once attempted to arrest a Polish driving licence. The Garda gave over 50 tickets for motoring offences to Prawo Jazdy across different arts of Ireland, making him the most wanted motorist in the country. He had different licences for different parts of the country, making him a brilliant master criminal. Then one of the Garda pointed out that "Prawo Jazdy" is Polish for "Driving Licence".

- Tangent: The first owner of a driving licence was Karl Benz from Mercedes-Benz. German citizens demanded he should get one. The organising body was called the Dampfkessel Uberwachungs-Verein, which means "The Steam Boiler Supervisions Association". The Queen does not need a driving licence in order to drive - she is the only person in Britain who is allowed to be exempt. Until 14th May 2002, women in Lithuania had to undergo a gynaecological examination before they could get a driving licence. There was one man who ran the entire office. Chinese driving tests have 100 multiple choice questions such as, "If you come across a road accident victim whose intestines are lying in the road, should you pick them up and push them back in: Yes or No?" The answer is no.

- Tangent: During the Cultural Revolution in China, the Chinese government decided that red should be colour on traffic lights indicating that you should go, because red is the colour of communism and it was deemed to be more appropriate. However, the change was not organised across the whole of the country so people got mixed up. As a result, it was changed back so that red meant you should stop.

- Tangent: The green colour of traffic lights is often tinted blue because of red-green colour blindness. Alan heard a line in a film that went, "Don't look at the lights, the lights never hit anyone."

- The thing that travels from Land's End to John O'Groats every year at about one-third of a mile per hour (but slower uphill, two days slower for every 100 miles of elevation) is the season of spring. Spring takes eight weeks to get from the bottom of the country to the top.

- Tangent: Birds fly south for the winter because the ground is frozen, so it is harder to get food.

- XL: The snail telegraph was a unworkable method of sending messages, based on the idea that snails were telepathic. A Frenchman called Benoit had a theory that when two snails (male and female) mated, they were forever after telepathic, and no matter how far away they were they could communicate thoughts to each other. He managed to raise money (somehow) to develop a system involving gluing 24 snails to a dish, each snail representing a letter (Q and X were left off), he did the same on another dish, sent one of the dishes to New York, and then you could send messages. This was done by wibbling the snail representing the letter you wanted to type, and the other snail in New York copying the movement. This system was called the Pasilalinic-Sympathetic Compass.

- Nothing happens if you give your child a really sugary drink. There is no scientific evidence to prove that children go hyperactive. Parents just perceive it to be true. When this was asked on the QI website, no mothers believed the QI elves.

- Nothing happens if you leave teeth in a glass of cola overnight. A doctor called Clive McKay appeared in front of the House of Representatives special committee in 1951 claiming teeth left in cola would dissolve in two days. If it is true, no-one sensible would leave teeth in a glass of cola overnight. Cola does not stay on teeth long enough to have an effect, unlike potato starch which causes the most damage. Cola is however good for cleaning metal, like HP sauce and vinegar. (Forfeit: They dissolve)

- Tangent: Andy's mother claimed that drinking too much cola stains the inside of your stomach.

- The type of ape which walks on two legs and is not human is a gibbon. According to evolutionists, walking on two legs is a more primitive way of walking. (Forfeit: Orangutan, Baboon)