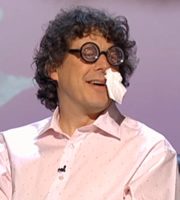 - At the beginning of the show, the panellists are all wearing glasses. Alan's have milk-bottle-top-thick lenses.

- The panel are asked to stick a piece of tissue up their left nostril and are asked to say something intelligent. The question itself concerns about how nostrils breathe. The breathing concentrates mostly on one nostril for about four hours and then changes sides. Also, you answer certain kinds of question better depending on which nostril is breathing. When breathing through the right nostril you should be better at visual and spatial tasks. When breathing through the left you should be better at verbal things. Sportspeople often use tape to open up both their nostrils to breathe better. However, another study says that blocking the right nostril makes you more emotionally negative.

- Another question is asked with the tissues up their left nostrils, to test their visual and spatial knowledge. The question is: "Consider an N-dimensional hypercube and connect each pair of vertices to obtain a complete graph of 2 to the power N vertices. Then colour each of the edges of this graph using only the colours red and black. What is the smallest value of N for which every possible such colouring must necessarily contain a single coloured complete sub-graph with four vertices which lie in a plane?" The answer is somewhere between 11 and Graham's Number - a number so large that there is not enough material in the entire universe to produce enough ink to write it down, although we do know it ends with a seven. Most graph theorists used to think that the answer to the question was probably 6 up until 2003. Graham's number is named after Ronald Graham.

- XL: There is no particular kind of music that makes children smarter. The idea of playing classical music, especially Mozart, makes children smarter is completely unfounded. A study which did claim this has since been debunked several times, partly because the study was conducted on students and not children. One possible theroy however, is to play natrual sounds because the noises of contemporary life (like televisions) are destructive and create behavioural difficulties.

- XL Tangent: There were two English Mozarts. One, Thomas Linley, played a concerto at a younger age than Mozart. At 14, both boys played together. Linley however drowned in a lake aged 22. The second, Samuel Wesley, was brilliant when he was younger but lost most of his genius when he banged his head causing mild brain damage, which lasted for the rest of his life.

- Exams are so much easier these days because over the course of time people are becoming smarter while the exams have remained at the same level of difficulty. The problem is that exams should probably be best marked by percentile, so that it is easier to distinguish which pupils are best. IQ tests do this. On average the population gets smarter by about 0.3% per year (3% per decade). This means that if you go back to your great-great-grandparents, they would be listed under the Mental Health Act of 1983 as retarded, because their IQ would be less than 70. This change in IQ is known as the Flynn Effect, named after James R. Flynn, who has used it to prevent American criminals from being executed. The law states that you cannot be executed if your IQ is 70 or less. Some people who took IQ tests as children may have got just over 70 as children, but because of the Flynn Effect that would mean that if they took a modern IQ test they would be under 70, and therefore their lives can be saved.

- Tangent: Alan's great-grandfather signed his marriage certificate with a cross.

- XL Tangent: Mensa is the Latin for "Table". It was originally called Mens, which is Latin for "Mind", but they realised that their magazine might look like something targeted towards gay men. Therefore they added an "A" at the end. Mensa claims that it represents, "the round table of equality" and claim that Mensa has no elitism - which is strange when you consider that everyone there has to have a high IQ.

- You could create a genius. Leonardo da Vinci's brother, Bartolomeo, married and wanted his child to be as great a genius as Leonardo. The idea kind of worked. After Leonardo died, Bartolomeo's son Pierino, who was brought up to be a genius and actually was a genius, but he died aged 22, leaving only 20 works. There was once a believe in eugenics, in which it was believed that by breeding the best humans, humans would become better, and that you should also stop the breeding of more stupid and weaker people, but this theory has now been discredited. Amongst other things, it led to racism and Nazism, but there many liberal people who thought that this was a good thing, including George Bernard Shaw.

- Tangent: Graham once did a game show in America in which a contestant told him a father was a serial killer and that she did not tell her husband about this fact before she married him. Graham asked her if her husband was worried about having children because he was worried about them becoming killers, to which the contestant replied that he was not worried because his family had similar trouble, because his father committed suicide.

- Tangent: The panel are shown a painting of Leonardo da Vinci dying. Alan claiming that one of the people in the painting looks like Rodney Bewes. This results in jokes about Bewes being immortal and being able to travel through time. Graham does not know who Bewes is because The Likely Lads and What Ever Happened to The Likely Lads? where not broadcast in Ireland, so Stephen explains it to him. Stephen then goes on to complain that QI is supposed to be cultural and not talk about things like celebrities, only for Alan to drag it down to talking about Rodney Bewes. Alan then goes onto say that someone else in painting looks like Matthew Kelly, and Stephen says than someone else looks like Brian Blessed's head.

- XL Tangent: Leonardo da Vinci's painting of The Last Supper was painted on dry plaster rather than wet plaster, which has resulted in it fading out quicker. It even started to fall apart while da Vinci was alive. During Napoleon's lifetime, the room in which The Last Supper was painted was used as a storeroom and a stable. Also, Christ's legs were painted, but they were knocked down to make way for a door underneath the picture.

- XL Tangent: Leonardo da Vinci did not make any real scientific contributions because he worte a mirror-writing diary in code. This was not decoded until 1970, by which time everything da Vinci had designed had came into being. His design for a helicopter would not have worked.

- XL: The reason why some people can roll their tongue whilst others cannot is because some people are able to learn it, whilst others can't. There is no proof that it is due to genes inherited from one's parents. Another similar thing is asparagus making urine smell. This too is nothing to do with your parents. The smell used to be called "Housemaid's despair" because the smell was so foul that the housemaid carrying the chamber pot would hold it as far away from her nose as she possibly could.

- The first animal to be cloned was a sea urchin in 1885 by a German called Dreisch. In 1902, another German called Pans Spemann cloned a salamander using a noose to separate the cells of the embryo made from the hair of a human baby. Dolly the Sheep was cloned in 1996. She was named after Dolly Parton because the cell came from one of her mammary glands. The first cat to be cloned was called Rainbow, but her clone, CC, looks nothing like her. CC stands for "Copycat". The cat clone, which was part of "Operation Copycat" was part of a larger operation to clone a dog. The first dog clone, called Snuppy, was performed in Korea, a country known for eating dogs. Correction: A picture showing what is claimed to be CC and Rainbow is actually showing CC and her surrogate mother Allie. There are also claims that "CC" actually stands for "Carbon Copy", but this is undecided.

- The chances are you are about 10 years old on average, because the cells in the human body are constantly getting replaced. Red blood cells get replaced every 120 days. Liver cells are replaced every 300-500 days. The whole human skeleton is replaced about every 10 years. The replacements however, always age somewhat. About 97% of the 7 billion billion billion atoms in the human body get replaced yearly. Even then, most of the cells in your body are not human, but are over 500 different kinds of bacteria. There are ten times more bacteria than human cells in the body. (Forfeit: Dara - 37, David - 34, Graham - 46)

- When Darwin's theory of evolution was published in On the Origin of Species, the Church of England were at first not hostile to it. Some believed that evolution may have been God's will. Some clergymen believed that a lot that was in the Bible was metaphorical. If there was anything that they were shocked by, it was the fact that nature did not care, and that all animals were fighting each other for survival. Most people did not understand it when his paper on the subject was first published. However, On the Origin of Species was so popular that it sold out before it was printed. Darwin is one of only five people who are not royal to be buried in Westminster Abbey.

- XL Tangent: Graham argues that animals should be allowed back in circuses.

- XL: Charles Cruft, after whom Crufts is named, owned a pet cat, not a dog. Cruft was a scion of a thriving jewellery business in the 19th century and a successful salesman. He went into business with a man called Spratt and they made dog cakes. Crufts later founded the successful dog show which he was a part of until he died in 1938 and the Kennel Club took over. However, Crufts is now seen as controversal due to the way dogs are bred. Sponsors, the BBC, the RSPCA and a dog charity withdrew from it. As a result, the 2009 Crufts was broadcast on the internet for the first time.

- XL Tangent: Alan and Graham claim that golf is a bad thing to show on television, while Stephen defends it.

- The Man with Two Brains had two brains. In fact, we all have two brains, as the lower gut has one as well, as proved by Dr. Michael Gerschwin. The gut has an enteric nervous system. If it was cut from the upper brain, it could still work.

Stephen ask the panel to say something intelligent while having a piece of tissue stuck up their nose.