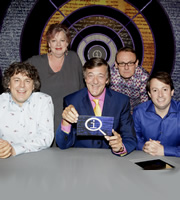 - XL: The Great Disappointment occurred in USA in 1844 when the Second Coming did not happen. William Miller claimed this would happen after studying the Bible, but it failed to transpire. Over a million people, known as Millerites believed it would happen. They sold their property, their farms, and gave up everything believing the Second Coming was due. It was even reported in the newspapers it would happen. One man threw himself off a barn at midnight believing he was going to be scooped up and saved - he wasn't. Despite the Great Disappointment, Millerites formed themselves into different religions, including Seventh-Day Adventists and the Jehovah's Witnesses. (Forfeit: Have you been talking to my husband?)

- XL Tangent: In the USA, there is now a new kind of movement concerning the apocalypse known as "The Rapture". People believe that Christ will take them, leaving only their clothes behind. In 1988, Edgar Whisenant sold 4 million copies of his book "88 Reasons Why the Rapture Could Be". The website www.raptureready.com gets millions of hits per year. It offers you handy letters to send to loved-ones to leave behind for your friends who are not saved by Christ. There is one section on the site called, "Oops, I guess I wasn't ready", which lists the perils of the post-rapture world, which include being marked by the Anti-Christ and being stung by enormous wasps. There is also a quiz called "Am I rapture ready?" About half of all Americans believe in the Second Coming of Christ.

- There is no truth in myth that short people are angrier and more tyrannical. Napoleon Bonaparte, considered short by today's standards, was above average height at the time at 5'7" (the average height was 5'6"), while Lord Nelson was only 5'4". His perceived shortness was mainly thanks to a British cartoonist called Gillray, who drew one cartoon of George III holding a tiny Napoleon in his hand with George III saying in the caption below: "I cannot but conclude you are one of the most pernicious little odious reptiles that nature ever suffered to crawl upon the face of the Earth." Some tyrannical people were definitely short, such as Joseph Stalin (5'5"), Alberto Mussolini (5'6") and Francisco Franco (5'4"). However, Idi Amin was 6'4" (the same height as Stephen Fry), Fidel Castro is 6'1", and Mao Zedong was 5'9" which is tall for a Chinese person.

- Tangent: Heightism does exist. Short people are paid less on average than tall people. It is comparable in magnitude to pay differences between race and gender. In a survey of Fortune 500 companies it was revealed that 90% of CEOs were above average height. 30% of those people are 6'2", which is the tallest 4% of the population. The public also tend to recognise short powerful people who have young, tall wives, such as Nicolas Sarkozy and Bernie Ecclestone.

- Mathematically speaking, everyone in Europe is related to Charlemagne. This is because everyone has two parents, four grandparents, eight great-grandparents and so on. By the time you get to the 13th century, you have more direct ancestors than have ever been human beings - about 80 billion. Therefore you must have shared ancestors. In 1995, a man called Mark Humphries at Dublin University discovered this information. He discovered his was wife was King Edward III's great-granddaughter 20 generations down the line. After closer examination, he discovered his wife was also related to Hermann Goring and American explorer Daniel Boone. He then managed to calculate the mathematics of the information. Correction: It is not true about the realtionship with Daniel Boone. However, West people are ultimately related include Boswell, de Sade, Goethe, Darwin, Francis Bacon, David Hume, Bertrand Russell, Bill Gates, Marie Antoinette, Valery Giscard d'Estaing, Anthony Eden, Lewis Carroll, Hugh Grant, Guy Ritchie, Brad Pitt, Rupert Everett, Ralph Fiennes, Johnny Dumfries, Barack Obama, George Bush Senior and junior and David Cameron.

- Tangent: Jo jokingly claims that David's brothers are the Mitchell brothers from "Eastenders", despite the fact they are fictional characters.

- The only good that was caused by the Great Fire of London was that it cleared enough space for Sir Christopher Wren to build St. Paul's Cathedral. It did not get rid of the Great Plague because it had already died out by then, and the plague was also in the suburbs while the fire was in the city. (Forfeit: Cleared the city of plague)

- XL: Cheese tastes better when freshly grated because it increases the surface area, making it more intense. When parmesan is grated it smells of vomit, which is caused by two fatty acids called butyric and isovaleric acid. If you had two bottles containing the same chemicals, and labelled one "parmesan" and one "vomit", most people will find the parmesan bottle to have a better smell despite the chemicals being identical.

- XL Tangent: The panel mock Stephen after he says that cheese is "the celebration of what happens to milk when it goes off big-time-stylee."

- XL Tangent: The panel talk about the sell-by dates on cheese saying that better systems could be when to eat it before the Rapture and the day when everyone finds out they are related to Peter Andre.

- The Great Train Robbers were not great at all. The main reason why was because out of the 15 robbers, 12 were caught almost instantly. These 12 went to a farm and played Monopoly using the stolen money. When they left the farm, their fingerprints were all over the place. Out of the other three, two escaped and one was acquitted. Although the most famous of the robbers was Ronnie Biggs he had a very minor role in the whole affair. Biggs was inside jail for taking and driving away when the mastermind behind the crime, Bruce Reynolds, said he would cut him in if Biggs could find someone who could drive a diesel train. Biggs found someone was called either "Old Pete" or "Stan Agate" - no-one knows because he was one of the people who were never caught - and Biggs was given a share in the robbery worth £147,000 (£1.6 million in today's money) for getting Old Pete to the scene. However, it turned out that Old Pete could not drive the train at all, was lying and was therefore useless.

- XL Tangent: The Great Train Robbery took place in Buckinghamshire on 8th August 1963. The money stolen would be worth £40million today. The actual train was a travelling post office train carrying used £1, £5 and £10 notes that were going to be burned.

- XL Tangent: A café near where Alan lives has a range of menus, one of which features Sid James and Barbara Windsor, another Peter Cook and Dudley Moore, and a third featuring the Kray Twins.

- It took 300 years for the giant tortoise to get a scientific or taxonomical name because people kept eating them. People would put them on ships and sail them back home, but by the time they arrived at port in Europe the crew would have eaten the whole lot. Even Charles Darwin and the crew aboard the Beagle ate all the giant tortoises on board. The only descriptions of them are comparing them to chicken, beff, mutton and butter, and saying they tasted better than all of them. Even the liver and bone marrow was considered delicious. They were also used as water stores, because they have a special internal bladder which stores water so perfectly that it is drinkable, so when you slit them open to cook them you also got a gallon of fresh water. The crew therefore stacked them up so that they could not move, and they did not need to be fed for months so they were very useful for whaling ships because they provided both food and water. There are 12 species of giant tortoise, all of which are now endangered. The actual scientific name for a giant tortoise is Geochelone.

- Tangent: One giant tortoise called Adwaita was Clive of India's pet. Adwaita lived to become 255 years old, dying in 2006, making him old then the French Revolution and Mozart. His death was announced on CNN.

- XL: If a giant panda does a handstand in front of you, you should back off because you are in it's territory. Pandas mark their territory by doing a handstand, resting on a tree and urinating on it. The higher the mark, the more powerful and dominant the panda is.

- XL Tangent: In San Diego Zoo they discovered that in order to get pandas to mate in captivity you swap cages. When they smell each other's urine they become aroused. Thus pandas are not any more reluctant than any other type of bear when it comes to mating.

- Catherine the Great died in bed following a stroke on her commode. She did not die while she was actually on the commode in question. The myth that she had sex with horses was put about by the French and her son Tsar Paul I who hated her, although it is true that Catherine did have a lot of sex with her courtiers. (Forfeit: On the loo)

- Tangent: People who died while on the lavatory include Elvis Presley and George II. People at the time wrote that George II died while "at stool".

- In cold weather most of your heat escapes from whichever body parts are exposed. It is not always the head. If you arm or leg was exposed more heat would escape from them rather than your head. (Forfeit: Your head)

- The lingua franca that was used in Ancient Rome was Greek. While Latin was considered the official language, most people spoke Greek if they did not speak Latin. (Forfeit: Latin)

Why are so many great men short?

Indeed, how many great men where short?

Worried about the Rapture? Don't worry - people have been worrying about it since the 19th century and it still hasn't happened.