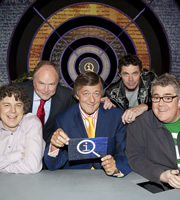 - The set is decorated with Greek statues, columns and pots.

- If you are a wealthy ancient Athenian and you want to avoid funding the navy the best way to avoid paying up is to find someone richer than you. Under Athenian law, if your property was worth 70 times or more than the average wage, you had to pay this tax, which was one of only a few in Athens. However, if you could find someone you thought was richer, they would tax them instead. This was tested by the challenger asking the richer person if they would like to swap property. If there was no swap, then the person challenged was deemed to richer and would instead be taxed, unless they could find someone richer.

- XL Tangent: The "ship" in words like "sponsorship" and "championship" is of Germanic origin. Many Germanic words containing the letter "f" became "p" in English. For example, "Pfeffer" became "Pepper". This change was so dramatic that in Arabic there is no letter "p" in Arabic. The brothers Grimm, most famous for their fairy tales, also invented linguistics and traced this phenomenon, known as the great fricative shift.

- If you see a Spartan with a new hairdo you should runaway, because the last thing a member of this warrior race did before going into battle was to cut their hair. Before the Battle of Thermopylae, the Persians made a huge mistake when one of their spies saw them getting their hair cut and claimed them being nancy boys by doing their hair.

- Tangent: One of the most famous depictions of Spartans in film is in 300, where Alan says the Spartans looked a bit camp. Stephen points out it might have looked camper because as well as 300 soldiers there were accompanied by 700 thespians.

- Tangent: Stephen compares the Spartans conquering Athens to be a bit like if the Klingons beat the Vulcans in Star Trek, or if the Daleks won in Doctor Who.

- Tangent: A "laconic" statement is a one which is very short and to-the-point. One ancient Greek one occurred when the Athenians sent a long message to Sparta that: "If we beat you, we will destroy your civilization, we will kill everybody, we will spare no-one." The Spartans replied with the message: "If."

- The proper thing to wear at the gym is nothing at all, because the word "gymnasium" comes from Greek "gymnos" meaning "naked". A "gymnasium" is "a naked place". However, they did wear a "kynodesme" which was a kind of leather pouch with a string bow that prevented your penis getting in the way of their training. Trainers would attract the athlete's attention by pulling on the string. Other gymnos related words include "gymnopedia" which was dances performed by naked boys at public events and "gymnologise" which is to debate naked.

- XL Tangent: Gymnasiums also became places of education like the Academy (where Plato taught) and the Lyceum (where Aristotle taught). The French word "lycee", meaning "school", comes from "Lyceum".

- XL Tangent: The origin of the word "Odeon" comes from Oscar Deutsch. It comes from his initials OD. This is correctly answered by the audience.

- Baron de Coubertin, father of the modern Olympics, won a gold medal himself in the poetry event, which he entered anonymously. Up until 1948, apart from the sporting events there were also artistic events in the Olympics which also included town planning, sculpture, music and painting. The oldest person ever to win an Olympic medal was 73-year-old Briton John Copley who won silver in the etchings and engravings event. In 1900, a woman won gold for poodle clipping, trimming 17 poodles in 2 hours. The artistic events stopped because of amateurism. The people in these events carried on being artists and so on after the games, while those doing the sport had other work to do. Correction: The idea of Poodle Clipping as an Olympic event was actually an April Fool created by The Daily Telegraph.

- Olympics gold meals are made mostly out of silver (at least 92.5%), with only a tiny amount of gold (6g). The last ones to be made entirely out of gold were in 1912. If they were made out of 18-carat gold each gold medal would be worth £3,000, which would total up to £1.5 million of the course of the games. (Forfeit: Gold; Chocolate)

- You would bite into a gold coin to check if it was really made out of gold. Fake gold coins normally have lead in them, so if you bite into them you would leave your teeth marks in it. When real gold coins are made, other metals were also added to harden it.

- Tangent: There is no lead in pencils.

- Tangent: If all the gold in the world that had been mined were put into a single cube it could probably fit inside the programme's studio. Only 161,000 tonnes of gold have ever been mined by humans, most of which was in the last 50 years.

- Tangent: On the island of Yap in Micronesia uses huge stones with a hole in the middle of them for currency.

- XL Tangent: Phill has a tattoo of an ancient Greek helmet on his wrist.

- XL Tangent: Eugene Sandow was the first of the modern bodybuilders. He and another man called Monsieur Attila invented the modern bodybuilding cult. Sandow held displays in London where were invited to touch his muscles. Smelling salts were eon offer because women fainted after touching him.

- XL: The panel are shown a complex mathematical formula (see here) and are asked what it proves. It proves that there is a god. It was made by Kurt Gödel, who was a friend of Albert Einstein. Einstein said he only went to work because the walk home with Gödel was so enjoyable. Gödel did not publish his formula because he did not people to think he believed in god and he was not satisfied by the conclusion. He was just showing how symbolic logic can be used to prove such a thing. Gödel later became paranoid about people poisoning his food so he always got his wife to check the food for him. However, his wife then went to hospital so no-one could test the food, so Gödel starved to death.

- XL Tangent: Stephen once starred in the film "IQ" which featured actors playing Gödel and Einstein. The actor playing Gödel was Lou Jacobi, while Walter Matthau played Albert Einstein. Stephen recalls how Matthau used to mockingly shake his hand and made Stephen bet on the wrong horses.

- Sewage could be used to create alien life because it contains bacteria. On space ships, most human waste is flushed out of the ship and sent into space. Arthur C. Clark once claimed it was possible that waste from an alien plant might have resulted in the creation of life on Earth. He wrote about this in an article called "Toilets of the Gods".

- Tangent: There are now space debris lawyers because if even a small object could hit a satellite and cause huge damage.

- You should not touch a meteorite with your bare hands because it is very cold and you could get frostbite. Although it heats up when going through the atmosphere, it is still very cold inside and cold outside. There are about 50,000 meteorites larger than 20g that fall from space onto Earth every year, but most land in the sea. Most have been found in Antarctica. No-one has ever been killed by a meteorite, although one dog was reported killed by one in Egypt in 1911 and a boy was injured by one Uganda in 1992. (Forfeit: It's hot)

- Nothing happens to you the instant you are put in a vacuum. You can survive for a few minutes inside one. You should exhale inside it and not hold your breath. Gas escaping from your body would simultaneously make you defecate, urinate and vomit. The first sensation would be the moisture on your tongue boiling, which results in you losing your sense of taste for several days. (Forfeit: Instant death)

- The country which has weekly news broadcasts in Latin is Finland. It is a 5-minute long bullet broadcast at 13:55 every Friday, then again on local radio in Helsinki later on. In Germany, Radio Bremen also broadcasts four-and-a-half minutes of news in Latin every month. More people outside Finland understand Latin than Finnish. (Forfeit: Vatican City)

- Tangent: Finnish musician Jukka Ammondt has recorded several albums in Latin including several Elvis Presley songs. These include "Nunc Hic Aut Nunquam" which is "It's Now or Never", "Cor Ligneum" which is "Wooden Heart", and "Tenere Me Ama" which is "Love Me Tender".

- At the end of a Greek meal you are most likely to see flowers being thrown. While plates used to be thrown, licences are now needed to do this in restaurants for health and safety reasons. (Forfeit: Plates)

- XL: Alan is last in the scores, so Stephen offers him the chance to come first the ancient Greek way - by swapping his scores with one of the other players. Alan decides to swap with the audience, so Stephen challenges him, by saying he will swap the points around with Alan can remember what the audience scored their points for. Alan cannot remember so no points are swapped.

For information on the correction, see the QI Qibble Blog.

So, what is the best thing to wear at the gym?