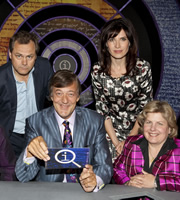 - The set is decorated with the male and female gender symbols.

- Bonus points are awarded if the panel spot any sexist remarks.

- The people who were traditionally dressed in pink and called girls were boys. Pink was considered the traditional colour for boys and blue for girls in the 19th century. In 1927, there was a report about Princess Astrid of Belgium who had decorated her son's room pink, only for her to give birth to a daughter. Part of the reason why blue may be seen as the traditional colour for girls is because the Virgin Mary is dressed in blue. Right until the mid-15th century, all children were referred to as girls, boys were called "knave girls" and girls were called "gay girls". The word "boy" originally meant "servant".

- Tangent: Female monkeys are attracted to pink because infant primates have pink faces.

- Tangent: One experiment done with chimpanzees involved giving them dolls and trucks to play with. The females played with the dolls and the males with the trucks.

- Tangent: When Sandi gave birth to her son, she decided not to have any toy guns in the house. When he was two, he improvised with a toilet roll as a gun.

- Tangent: The "traje de luces" or "suit of lights" is the suit normally worn by matadors, which is usually pink.

- Tangent: The colour pink does not exist on the electrical spectrum.

- Tangent: According to studies of hunter-gatherer societies, 9/10ths of the food is collected by women.

- There are many theories and beliefs on the best way to get a girl when you are pregnant. The current theory is to do with diet. One theory is that if you had a higher calorie intake before you were impregnated, out of 100 mothers 56 had boys. Another showed that women who eat a bowl of breakfast cereal every day were 87% more likely to have boys than those who had more than one bowl a week. Women who had boys had 400 calories more daily on average than those who had girls. Another theory states that women being infected with hepatitis B are 1.5 times more likely to give birth to a boy. However, in America and Thailand you can select an embryo so you know in advance what the gender of the baby is going to be, but it costs $18,000. Aristotle believed that the mother's diet and the sexual position used at conception made a difference towards the gender. Anaxagoras believed that men had male and female testicles, so you should tie of the testicle that you did not want. The Talmud recommends lining the bed north-south before sex to get a boy. The French believed that wearing boots to bed made it more likely you would have a boy.

- Tangent: A couple who were friends of Alan had a baby in Thailand, and the local Thai women said that if the mother looked pretty when pregnant, the child would be a girl, and if she looked tired and ugly, it would be a boy. When the mother asked what child she would probably have, they said it would be a boy - and they were right.

- Tangent: Sandi was once walking down the street with her two daughters and her son for no reason went "Hah!" like some kind of ninja. They had no idea why. When Sandi's son was six he a friend over who asked him what it was like having two mothers (Sandi is a lesbian). Her son said, "It's marvellous. If one of them is poorly, you've still got one to do for you."

- XL Tangent: Alan claims that if you have the football on the television when making love, chances are you will have a boy, to which Sandi retorts by saying that if the football is on, he'd be lucky to have any sex at all.

- Tangent: Germaine Greer said: "There are only two things that women don't do as well as men and that's design dresses and cook." This is because the most famous chefs and fashion designers are men.

- XL: You will find the most violent women in history in Benin. The Dahomey in the 19th century protected the king. They had to be nominal wives to the king, although they were celibate. Chosen for their aggression, a husband could nominate his wife if he thought she was a nag. Their weapons included a switchblade which could cut a man in two. Some see them as tragic figures, who had to surrender their womanhood turn into men and despise women. Others claim they were venerated, walked down streets accompanied by slave girls ringing a bell, and all men had to avert their eyes. In myth, there were also the Amazons, a race of warrior women.

- XL Tangent: Princess Khutulun, the niece of Kublai Khan, was the fiercest of all the warriors according to Marco Polo. She said that she would wrestle any man who wished to marry her. If she lost, she would marry the winner. If she lost, the loser would give her 100 horses. She died unmarried and with 10,000 horses.

- XL Tangent: Violent crime by women has risen in the UK by 25% over the past three years. It may be because of drink, because drunk women have 50% more testosterone in their blood. During the same period, violent crime by men has fallen by 2%.

- XL Tangent: When Sandi arrived to Britain aged 14 from New York, she had a thick New York accent. Because of this, no-one spoke to her for six weeks. However, she changed her accent after she watched the film "Brief Encounter". Stephen claims that if you are a boy being physically bullied, the best way to stop it is to say "No, no, no, don't! You'll give me an erection!"

- In China, "Nushu" (pronounced "New Shoe") is a form of writing created and learned by women, developed in Jiangyong County in the Hunan Province. It was a phonetic system of writing developed because women were not educated in China. When a woman married, they would be taught the language and would write in a secret book to record all their private thoughts. The book was shared by lots of women in the area. However, they would send the books rather than take them because Chinese women had bound feet. At the age of five, all of the bones in their feet were broken and then the foot was bent underneath. Three inches was the ideal length. Many of the feet rotted and thus women died of gangrene. This practice went on for almost 1,000 years. Women also wrote in tapestry to each other.

- Tangent: There is a tribe in Africa where it is practice that when a woman gets married she is no longer allowed to use any of the syllables in her husband's name.

- Tangent: Other secret languages include "Pig Latin" in which you take the first syllable of the word, put it at the end of the word and add an "ay". In Pig Latin, "Quite Interesting" is "Itequay Interestingay". The Germans have a nonsense language called "Loffelsprache" which means "Spoon speak", the French have "Louchebem". There is also "Pileshki" and the Japanese have "Ba Bi Bu Be Bo". There is also a very camp High Church nonsense language, in which "Holy Communion" is called "Haggers commagers" and "Jessica Christ" for "Jesus Christ".

- XL Tangent: Sandi's grandmother got thrown out of three care homes. Sandi's mother grew up in Maidstone during the Battle of Britain, and all the houses except her's got bombed. When Sandi asked why this happened, her mother said, "Granny wouldn't have allowed it."

- The panel are shown a picture of a chicken and are asked what is going on. The answer is that it is half-male and half-female - right down the middle of its body. This phenomenon is called "bilateral gynandromorphic hermaphroditism".

- Tangent: Clown fish have relationships with a kind of anemone. They are one of the few fish not poisoned by them so the clown fish lay their eggs in the anemone. In terms of relationships between the fish, there is normally one female, one alpha male and lots of weaker males. When the female dies, the alpha male become the new female and one of the weak males becomes the new alpha male. So in the film "Finding Nemo", Nemo's father would have become his mother by the time Nemo was found.

- XL: If you met a nun with hairy hands, they might be a Nazi. During the Second World War, there was an urban myth that Nazi soldiers were being parachuteded into Britain disguised as nuns. It was said that when they reached out, it would be shown that they had hairy hands and thus would give themselves away. Some people believed the nuns might have had Hitler's face tattooed on their arms.

- XL Tangent: When Alan attempted to grow a moustache, it was grey. His wife then told him that Alan already had grey pubic hairs.

- XL Tangent: A way to test if someone was German during World War Two was to get them to say certain names, because the Germans would pronounce them wrongly. Common examples included "Featherstonehaugh", "Cholmondeley", "Berkeley", "Mainwaring" and "Belvoir". One aristocratic name is "Tollemache", and there was a Tollemache-Tollemache family, but each half was pronounced differently. It was pronounced "Toolmake-Tollmash". One member of their family had the longest name of anyone in the British army, which was Leone Sextus Denys Oswolf Fraudatifilius Tollemache-Tollemache de Orellana Plantagenet Tollemache-Tollemache. His elder brother was called Lyulph Ydwallo Odin Nestor Egbert Lyonel Toedmag Hugh Erchenwyne Saxon Esa Cromwell Orma Nevill Dysart Plantagenet Tollemache-Tollemache. The initials of his Christian names spell "Lyonel the Second".

- If you were in a dark bar and whated to check if the person you were chatting to was a woman and not a man, there is no sure fire way of known what gender they are except for looking at their genitals. Some people think that men have bigger Adam's apples, but women can have big ones too. The correct term for an Adam's apple is "prominentia larynega".

- The reason why men are better at women at reading maps is because their brains work differently. Men use 6.5 times more grey matter than women and women use 9 times more white matter than men according to tests. Grey matter helps with mathematics, map reading and intellectual thought. White matter helps with emotional thinking, use of language and multitasking. So quite a lot of the supposed stereotypes about the differences between men and women are true. (Forfeit: They're not)

- Tangent: Sandi stopped for directions in Ireland and ask the way to some town. The man said if she wanted to go to another town. Sandi said know, to which the man said it was a shame, because he knew the way to the other town.

- The unfair thing about the prize money at Wimbledon is that it is the same for both men and women, but the men's matches are longer. Therefore the men do more work for less money. Also, because the women's matches a shorter, the women can enter more doubles matches, and thus earn even more money. In 2005, the final eight women earned on average £1,432 per game, while the final eight men earned £993. (Forfeit: Nothing)

- The Girls: 8 points (Sandi Toksvig with 5 and Ronni Ancona with 3)
- The Boys: -5 points (Individual scores not mentioned)