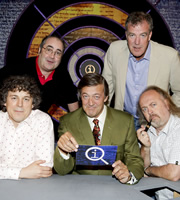 The "i" in the middle of the QI set is covered in solar panels. Instead of using the usual electric buzzers, the panel use woodland whistles, except Alan who is given a duck quacker.

- Frankenstein was coloured white. People often get confused between Dr. Frankenstein and Frankenstein's monster when they say the name. (Forfeit: Green)

- Tangent: In the original novel, the name of Frankenstein's monster is "Adam", after the first man according to the Bible.

- Frankenstein's monster, Adam, was coloured yellow, in the original book by Mary Shelley. She wrote: "His yellow skin scarcely covered the work of muscles and arteries beneath. His hair was of a lustrous black and flowing, his teeth of a pearly whiteness." (Forfeit: Green)

- XL Tangent: The original novel by Mary Shelley sold 500 copies when it was first released. It only became a success when it was adapted into plays. The first person to become famous playing the monster was T. P. Crook. Over the next few years 14 separate productions were made in various cities. By the time cinema came the book and the plays were much better known.

- XL Tangent: Originally the Incredible Hulk was not green. He was grey when he first appeared in 1962 because Stan Lee did not want to suggest any ethnicity. The director of the movies, Ang Lee, did all of the Hulk's movements by using a special CGI suit. Alan however claims Lee was not very Hulk-like because he is lack of height.

- XL Tangent: In the first three Superman comics, Superman cannot fly and he had to run to his destinations.

- XL Tangent: Beaming was invented in Star Trek to reduce costs because they could not afford to land the model shuttle on the planet every week. The studio which it and Mission: Impossible was filmed was the same one used to film the hit American sitcom I Love Lucy, starring Lucille Ball. Ball met her husband on the set there and they brought the studio five years later.

- Tangent: If you put all the gold in the world that was ever mined into a single cube, it would be about 55 feet from side-to-side.

- XL Tangent: Most of 1.5 million mobile phones thrown away in Britain are taken to a single town in China, which is home to the largest electronic waste site on Earth. It is believed that 150,000 e-waste works are at the site, earning an average of $1.50 a day. More than 80% of local children suffer from lead poisoning.

- XL Tangent: Danny does not own a mobile phone.

- Tangent: Catalytic converters give off platinum. They give off so much that it may be possible to harvest it from roads using a form of E. coli bacteria which is not harmful to humans.

- Four generations of the same family sold people the time. From 1836 up to 1940, the Belville family, most famously Ruth Belville, sold the time by going up to the Greenwich clock, the only timepiece which accurately kept Greenwich Mean Time (GMT), set their watch by it every week, and would then sell people a look at their watch so that other could set their watches accurately. Businessmen had a subscription to the business.

- Tangent: One of the reasons why there are 24 hours is that it is divisible in several ways. It can be divided by 12, 8, 6, 4, 3, 2 and 1. However, it is possible to decimalise time. Also, it was invented by the Babylonians who had a base 12 counting system.

- At the South Pole it is every time, because all the time zones converge there. For people working there, the default time used is GMT.

- Tangent: When Jeremy was at the magnetic North Pole, he tried to see if his compass point would swing widely around, when he stood above it. However, it did not happen.

- According to the Vegetarian Society, people who are called "vegetarians" are called this because the word comes from the Latin word "vegetus" meaning "whole, sound, fresh or lively". (Forfeit: They only eat vegetables)

- The panel are asked to name some famous vegetarians. The only person they name is Adolf Hitler, who was not a vegetarian. (Forfeit: Hitler)

- Tangent: When Jeremy's tortoise recently died, he seriously considered eating it's leg. Bill also had a tortoise that had bad arthritis in its leg. The vet said that it could be amputated and replaced with a castor. This leads to a discussion about removing all the legs of a tortoise, replacing them with wheels, motorising them and sending down to the shops.

- XL: The word "vegan" comes from the beginning and the end of the word "vegetarian". It was coined by woodwork teacher Donald Watson in 1944. Vegans do not any meat or anything that comes from an animal like eggs, milk or cheese. Famous vegans include actress Pamela Anderson, Radiohead frontman Thom Yorke, poet Benjamin Zephaniah and political and gay rights campaigner Peter Tatchell.

- XL Tangent: Mark Bolan got his stage name from shorting the name of Bob Dylan. Mark Bolan was a vegetarian. Danny claims that the worst time the death of a hero of his to broken to him was when his father brought him a cup of tea to his bedroom and said: "Here's your tea. Oh, who's that bloke you like? The one with the stars on his face?" Danny said it was Mark Bolan and his father said: "Yeah, gone. Dead", and he left the room.

- XL Tangent: Bill's neighbour broke the news of the death of Bill's cat when he came to him and said it got hit by a car. Bill asked why he thought that and the neighbour said: "Well, it's completely flat."

- A cow magnet is fed to cows so that if a cow eats anything which is made of metal and could harm them, it gets attracted by the magnet and is dissolved by stomach acids safely.

- Tangent: A friend of Alan's is afraid of cows. At first he did not believe his friend, but then he showed Alan an article from Metro about an off-duty policeman had been attacked by cows. The policeman phoned the police to rescue him. The police sent in a helicopter which scared the cows of and the picked up the policeman who had several broken bones.

- Tangent: Danny once got herded in by cows. The cows tried to mount his Land Rover. They were even standing on the roof of the car. He was terrified that the roof would cave in. He tried everything to get rid of them. Danny even tried playing show tunes and opening the sun roof (the song was "Defying Gravity" from Wicked). In the end his wife told him to get out of the car, but Danny could not do it because they were so close he could not open the door.

- XL Tangent: An academic from a German university discovered (by using Google Earth) that out of 8,510 cows, most tended to face either north or south, giving rise to possible claims that they can sense magnetism.

- XL: The main thing achieved by the Green Revolution was that it saved a billion people from starvation, especially in India. Norman Borlaug won the Nobel Peace Prize in 1970 by growing a particular type of wheat in what was dubbed the "Green Revolution" which could yield more food and was hardier. Borlaug is believed that he saved more lives than any other human being. On the downside it has damaged biodiversity and relies on pesticides.

- XL: If you received an alien message from outer space, the first thing to do is to check it is real, according to the Search for Extra Terrestrial Intelligence (SETI). Secondly, you should contact other countries who have signed up to SETI's decollation on these matters and your national authority. Thirdly, you tell other astronomers about the discovery online. Fourthly, the discoverer can announce the message to the media. SETI also has reply protocols. The first step is that no-one should reply without checking with everyone else first. The United Nations should decide finally if we should reply and the reply should be on behalf of all humanity, not just one nation, corporation or group. The message should be published before transmission and an institution should be put in place to manage the conversation as replies might take a long time to come.

- Lord Hardwicke's Marriage Act was good for the Scottish tourist industry because the Act did not apply to Scotland. As a result people would go across the border to Gretna Green in Scotland where the act did not apply and get married there. Before the Act came into force in 1753, who did not need permission to marry someone. All you needed to do was satisfy three rules: you were not married already, you were above the minimum age required (14 for boys, 12 for girls), and you could not be brother and sister. You did not even need witnesses. The Hardwicke Act came in to help legal disputes concerning marriages, but it did not apply in Scotland. Gretna Green was the first place in Scotland on the main road to Edinburgh. People could get married anywhere. Some got married in blacksmiths and these became known as "anvil weddings". Thousands were performed. To this day, 5,000 weddings still happen in Gretna Green. Correction: The act did not come into legal force until 1754. There were also many other laws regarding marriages before the act came into force. 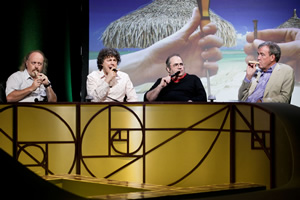 - Tangent: Jeremy says that it is wasting electricity to have two screens on in the set. So the screen behind Alan and Bill is turned off and they move to Danny and Jeremy's side. (See picture) Danny says they should go a step further and that the people at home should turn off their TV sets.

- The panel listen to a snippet of "Colonel Bogey's March" and are asked why Colonel Bogey went one over par in 1925. The answer is the British did it to conform to the American way of scoring golf. Originally, Bogey meant "par". The way you set par was to imagine you were playing perfect player, who got an exact score without dropping any shots, and the player was called Mr. Bogey. In the United States Golf Club changed the name to Colonel Bogey, so it still meant par. However, American courses were newer and when they played in Britain they thought the British courses were easier, so they made a British score so Bogey became one over par. Eventually, the British changed their scoring so now Bogey is one over par.

- If you are on a tropical beach with a screwdriver and a rusty nail, and a huge cloud of male mosquitoes descend on you, they are after the orange in the screwdriver, which is a type of cocktail. Only female mosquitoes suck blood, which they use to fertilise their eggs. Female mosquitoes are attracted to moisture, lactic acid, carbon dioxide, body heat and movement.

- Tangent: Jeremy claims that a Daiquiri for breakfast is wonderful.

- Wind turbines can kill bats. They drop the air pressure around them so that if the bats are nearby the capillaries in their lungs burst. (Forfeit: Kill birds)

- Tangent: Wind turbines can also kill goats. A man in Taiwan lost 400 goats because they could no longer sleep due to the noise the turbine made.