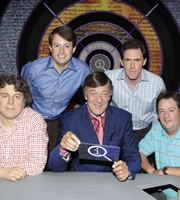 - Tangent: Rob has a short friend who wears vertical stripes to make him look taller, although David points out this would not work if the friend is with someone taller.

- The columns around the Parthenon look straight because they are. People used to believe that columns bulged in the middle due to a visual phenomenon in a thing called "entasis". If a column is straight then from a distance it looks like it bows inwards. Therefore, the secret is to make it bow outwards so that from a distance it looks straight. However, the columns are in fact perfectly straight. Entasis does exist however, but not with the Parthenon. This information was also discovered by Dr. Peter Thompson from York University, who is in the studio audience.

- XL Tangent: The panel are shown pictures of three different styles of ancient Greek column. One is Doric, which is the simplest looking; the second is Ionic which is a bit more elaborate and the third is Corinthian which is the most ornate. They all named after places: Doris, the Ionian Islands and Corinth. Throughout ancient Greek history no-one developed the arch, which meant that no domes or vaults were built.

- XL Tangent: There are several places where it is claimed that Sir Christopher Wren deliberately made columns short so that he could prove that they were not needed to support the roof up. Buildings which have this claim include the Guild Hall in Windsor and the library at Trinity College, Cambridge.

- The panel are shown two shapes. One is very pointy; the other is more curved and blob-like. One of them is called a "kiki" and the other is a "bouba". The panel are asked to guess which is which. There is no right or wrong answer. According to psychologist Wolfgang Kohler, words that have a kiki sound will sound pointy in any language, and words like bouba sound blob-like in any language. It is a kind of onomatopoeia. For example, in the Huambisa language South America 98% of people who do not speak Huambisa when seeing the words "chunchuikit" and "mauts" and thought that one was a fish and one was a bird that the chunchuikit was a bird and the mauts was a fish. Another example is that "mother" in many languages has a "ma" sound associated with being close, and that "father" in many languages has a "ba" or "da" sound associated with being further away.

- Tangent: The Welsh word for "carrot" is "moron".

- The most successful textbook ever written is Elements by Euclid, which is all about geometric planes and conical sections. It mentions all forms of the circle and square. Engineering owes a huge amount to this book. Many mathematicians believe that Elements is the most beautiful of all mathematical books.

- Tangent: Queen Elizabeth I's court magician John Dee worked as a spy. The cipher he used when he was a spy was "007". Ian Fleming learned about this and used it as the cipher for James Bond.

- XL Tangent: John Dee was also an astrologer. When he brought Euclid to people's attention he published it as a pop-up book. Pop-up books were written for adults at the time.

- XL: You would call a left-handed lemon an "orange". Lemons and oranges have the exact same chemical structure, but the other way around so it is a mirror-image. As a result, the smell of an orange is the exact opposite of that of a lemon. Other chemicals which have similar properties include glucose. Only right-handed glucose is absorbed by the body, so all left-handed glucose foods are used in diets.

- XL Tangent: Johnny has a friend who is right-handed but because he has such poor hand writing his wife thinks he is left-handed and in denial. The proportion of right-handed people to left is about 7-9 out of 10 on average.

- XL: There are 3,474,386,388 cricket pitch-sized amounts of land in Kansas. The length of a cricket pitch is 22 yards, which is one chain. There are 10 chains to a furlong and 80 chains to a mile. One acre is 10 square chains. When the USA was measured out they used British imperial measurements. All of the Midwestern States were measured in blocks of 24 x 24 miles, some divided into 20 x 20 chains known as "forties" because it would be 40 acres. The smallest kind of farm in America was known as a "forty". In terms of actual cricket pitches, there are seven in Kansas.

- XL Tangent: When the slaves were emancipated in the USA, each one was entitled to a forty and a mule. Spike Lee's film company is called Forty Acres and a Mule.

- XL Tangent: Rob gives a long account of the life of Elvis Presley in an attempt to gain points. David describes his account as like listening to Radio 2 in the middle of the night.

- XL Tangent: The first international sports fixture of any kind was a cricket match between the United States and Canada.

- Tangent: Stephen lost a day flying across the International Date Line from Los Angeles to Sydney. David claims that if he did that every day, Stephen could look 80 when he would be in fact 160.

- The panel are shown two diagrams. Both are triangles made from four different shapes, including two triangles, but one of them has an extra square in it. The panel are asked where the extra square comes from. The answer is the hypotenuses of both triangles are curved, not straight. One has a ratio of 5 to 2, the other of 8 to 3. It was discovered by a magician named Curry and it is known as Curry's Paradox.

- The best place to punch a shark is in either the eyes or the gills. However, you should not really be worried. More people in the world are bitten by New Yorkers every year than sharks. 81% of victims attacked by sharks suffered only minor injuries. However, 120 millions sharks are killed every year for shark's fin soup, which is a tasteless thing (chicken stock needs to be added to it) and only the fin is used. The rest is thrown away.

- Tangent: David says he hates sharks because he thinks they look scary. Stephen tries to persuade David to like them by talking about the shark's teeth, which are in rows. When one gets used up, a new row is moved forward like a conveyer belt. David is not convinced.

- An octopus has two legs. The other six tentacles are used as arms.

- You can see about 59% of the Moon from the Earth. This is because of libration, which is a kind of jiggling effect which exposes more of the surface.

Best Place to Punch a Shark

A useful bit of advice if you should see a shark.