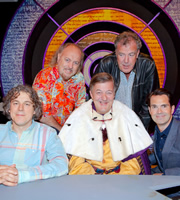 - Stephen is dressed in ermine, a medieval king's outfit and a crown. All the other panellists are wearing crowns except Alan who has a Christmas cracker paper crown. The crown that Bill is wearing is so big it slips over his head.

- The panel are shown a list of kings with unusual nicknames. They have to figure out who the kings are and why they are called that.

- Constantine Crap-name - A descendant of Roman Emperor Constantine the Great, the first Christian Roman Emperor and the founder of Constantinople. However, he became very unpopular and his enemies claimed that when he was baptised he was so nervous that he crapped into the font. Thus his nickname was "Koprononym", which means "Crap-name" in Greek.

- King Eystein the Fart - A Norwegian king, his surname means "fast" in Norwegian. He travelled around a lot and is the first person on written record to ice skate. His successor was his son King Halfdan the Mild.

- King Ragnar Hairy Breeches - A Viking king who got his nickname from the hairy breeches his wife made for him. They were made out of animal hide and designed to protect him. However they failed. His ship capsized of the coast of Northumbria and he was thrown into a pit of venomous snakes. The current king of England was King Ella. Ragnar however was revenged by his son King Ivar the Boneless, who captured Ella and performed the "Blood Eagle" on him, which involved pulling apart Ella's ribs and having his lung spread out across his chest.

- Tangent: In Valiant Comics there was a superhero called Janus who was an escapologist. Nearly every story had to feature him getting through a narrow gap to free himself.

- Tangent: Alan saw a documentary about heart surgery in which in order to get to the heart the surgeons have to use a power saw to get through the sternum. When you get to a certain age they cannot rusk doing this, so they have to go up through the thigh. Bill jokes that they actually go through the penis and it is "pee-hole surgery". Alan jokes back saying they really go through the anus, which leads him to ask if farts smell before they come out of the anus. 24 hours before a colonoscopy they give you really powerful laxatives, although Bill jokes that you have hallucinogens.

- XL Tangent: Jeremy asks how fast asparagus makes your urine smell. It is actually very quick, but it does not happen to everyone. Similarly some people see their urine go red when they eat beetroot. Jeremy says that one morning after going for a poo he thought that blood had come out. He thought he had bowel cancer for several days before realising that it was just beetroot. Bill had a similar experience. He contacted his doctor who asked for a sample. He went to the doctor's reception, gave them his details and they asked him, "What's it for?" Bill told them about his abnormal bowel movement, but the receptionist actually asked, "What's the initial for?"

- There are no cobras beginning with K. What we call the king cobra is not actually a cobra. It is actually part of its own genus of snakes called ophiophagus, which means "snake-eating snake", because that is their diet. (Forfeit: King cobra)

- The noise a king cobra makes is a bark, although Jimmy claims that if you played the noise of it several times it sounds like the Tardis. The noise is made by a special place in the snake's trachea and a kazoo-like membrane. The king cobra has more venom than any other snake. It is not the most deadly venom, but there is much more of it, they envenomate more often and they chase you. (Forfeit: Hsssssss)

- XL Tangent: A king cobra has enough venom to kill 20 people or 1 elephant.

- The panel are shown a picture of a medical implement which consists of a long metal hook that is thin at the end but becomes more knife-like at the handle. They are asked when a Frenchman might like it put it up his bottom. King Louis XVI of France, who like riding and enemas, developed a fistula, which is when a duct appears between two organs and connects them causing pain. The device pierced the fistula and cured the king. The doctor responsible, Felix de Tassy, was given an estate and became hugely popular with no less than 30 courtiers mimicked the king saying that they had a similar problem. Suddenly having a fistula became fashionable. He thus had a backorder of operations, but he did not operate on anyone who did not need it. (Forfeit: Because he's French)

- The thing which has 20 legs, five heads and cannot reach its own nuts is a squirrel king. This occurs when two or more squirrels (in this scenario five) all have their tails stuck together because they have been caught in tree sap. As a result they cannot move and they die. This phenomenon was first spotted in Germany with king rats. There are museums and universities which have huge rat kings preserved in alcohol. (Forfeit: One Direction)

- XL Tangent: Rats sleep together in the sewers for warmth and urinate while they sleep. Sometimes it gets so cold the urine freezes and kills the rats.

- XL Tangent: Superglue was originally invented for medical purposes during battle. It was used to tie up wounds quickly when there was no available stitching during the Vietnam War.

- Kings Cross Station could possibly be improved by adding a runway. In 1931 there was a plan to create an airport in inner London by adding an eight-pronged wagon wheel-shaped runway on top of the flat roof of the station. This was before the jet age so the planes would have been much quieter. The system would have had lifts to take planes up and down into hangers.

- XL: Over 300 people need to die before you finally get a burger king because Wesley Berger of Oregon is 305th in line to the British throne. If all 304 other people ahead of him died first, Wesley would become king of Britain.

- XL Tangent: British law has now changed so it would be the firstborn of any gender who are next in line to the throne rather than the firstborn male. If this law had been around at the time of the death of Queen Victoria in 1901 the next monarch would have been Princess Victoria, but she, who would have been Queen Victoria II, died very soon after her mother. The crown would have then past Victoria II's son, who was Kaiser Wilhelm II, the German monarch during World War One. No monarch on the British throne has ever been descended from Charles II, but if Prince William becomes king he will be the first British monarch to do so because Princess Diana was descended from Charles II in four different ways.

- XL: The sort of sick person who wants to be touched by a member of the royal family would be someone who was ill several centuries ago, because it was once thought that the touch of the king could cure you. Scrofula, also known as the King's Evil, was believed to have been cured by the touch of the monarch, a practice carried out in England and France. Edward the Confessor was one of the first monarchs to carry out the "treatment" and gold coins were given to the patients. Charles II was one of the last to do this, touching 92,107 people during his reign. George I stopped the practice because he thought it was too Catholic.

- XL Tangent: Conversely, in Siam they had a culture of not touching the monarch. This has sometimes come at a cost. In 1880 a Siamese princess called Sunandha Kumariratana drowned to death because no-one was able to touch her and thus come to her rescue. Emperor Menelik II of Ethiopia, who converted to Christianity, liked to cure himself by eating pages of the Bible. He died choking on the Book of Kings.

- Tangent: Petrol is also iridescent. When you put it on a puddle of water it goes rainbow coloured, but it is not rainbow coloured. There used to be different coloured diesels for farmers.

- XL: Knick-Knack Experiment - Stephen gets out three drinks: curacao, which is blue; lemonade, which is clear; and pomegranate juice, which is red. If you mix all three together in a glass and hold the glass up to the light the colour will be different depending on the shape of the glass. If it is a coupe shape the liquid will seem reddish/purple in the light, but if it is flute shaped it will look blue in the light. If the glass contains both shapes, it will show both colours separately in the right sections. This experiment was devised by Dr. Alice Bowen.

- There have been nine king Henrys of England. There was a ninth, who was the son of King Henry II called Young King Henry. According to the French tradition he was anointed king while Henry II was still alive. Young King Henry died aged 27. When he was 17 he got into trouble for refusing to turn up home at the castle for Christmas, because he was holding a feast in Normandy in which he invited only knights whose names were William.

- Tangent: At the Beefstake Club in London all the butlers are called Charles, whatever their actual name is. Stephen is a member of the club.

- Knick-Knack Experiment - Stephen creates foam. He takes some potassium iodide, which is a catalyst, and adds to a large conical flask containing a small amount of hydrogen peroxide, an unstable liquid used to dye hair blonde, and washing-up liquid. This mixture results in a foam eruption.

Stephen Fry demonstrates an experiment with hydrogen peroxide on the QI set.