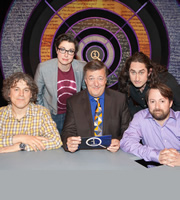 - The panel are shown a picture of four lengths of rope all tied up and are asked how many knots there are. There is only one, which is the hangman's knot or noose. The other two are a highwayman's hitch, which is used to hitch a horse and while pulling the rope in one direction tightens it, pulling it the other way releases the horses quickly; the euro death knot, otherwise known as a one sided overhand bend, which ties two ropes, and got the death nickname from American climbers who thought this European knot was unsafe; and the snuggle hitch, invented by Owen Nuttall, and is a more secure version of the sailor's knot called the clove hitch, which was not introduced to the International Knot Tyers Guild until 1987. This guild lists 3,800 different knots. The hangman's knot is named after Charles I's hangman Jack Ketch, and is considered humane because it broke the neck quickly. (Forfeit: Two; Four; None)

- Tangent: A 5,300-year-old man frozen in ice called Otzi was discovered to have a Euro Death Knot on him, so we know that the knot dates back to at least this time.

- Tangent: There was one prison where the prisoners built the gallows where if you stood on a particular plank it forced the wood out and the trap door would not open. As a result it would be seen as an act of God and the prisoner would escape the execution.

- Each panel is given a length of rope, each with a loop for the wrists to go through. Ross and Alan tie themselves together, as do Sue and David, and the two have to figure out how to get free. Sue figures it out, by making another loop with the rope, putting it through David's cuff and slipping through.

- XL: If you want to tie the knot at a knobstick wedding you need a woman to be pregnant. It is akin to a shotgun wedding, in that it is forced. A knobstick is a weapon - a wooden club with a knob on the end. In Britain, if an unmarried woman had a baby then the baby was "on the parish" (like in Oliver Twist) and the parish paid for the workhouse and baby's upkeep. The parish did not want to do this, so in smaller villages where they knew who the father was the people would force the father to marry the woman because it would then become the father's duty to raise the baby. One description from 1829 reads: "One of those illegal celebrations of matrimony which are termed by the peasantry 'knobstick weddings' took lately place in Wirksworth. The parties forced into the blessing state are William Saxton, a slender-witted man aged 24, and Lydia Brookes, some 15 years older, who has a wooden leg." The first occurance of the phrase "Tying the knot" dates to 1717.

- XL Tangent: Odder weddings (not legally recognised) include Kevin Nadal of America in 2005, who married himself. He said that if people are happy to celebrate married life, why not celebrate single life as well. Another odd wedding was that of 57-year-old German Eija-Riitta Berliner-Mauer, who in 1979 married the Berlin Wall. Another person dated and married the Eiffel Tower. This same person had previously gone steady with a bow and a fence.

- The reason to ban knitting patterns, flowers, hugs and kisses is because they might be code. During World War II people were banned from sending these things abroad in case code might be embedded in them. Postal chess and kisses at the bottom of letters were also banned.

- Tangent: QI fan Karen Templer has sent to the show a knitted pattern in Morse code. The bumps on the pattern read: "I wool always love you."

- XL Tangent: Most people believe that "tricoteurs" - women who used to knit while watching the guillotine executions during the French Revolution - did not exist. The most famous fictional example is Madame Defarge from "A Tale of Two Cities". The word "tricoteurs" means "knitting women". The original women of the revolution, called the "Mothers of the Revolution" were at first much-loved, but were considered a nuisance by the time of The Terror. The women were told to keep quiet and were forbidden to wear trousers, a law which was not repealed in France until February 2013.

- Knitting can reduce fear, crime and disorder if you are into guerrilla knitting, also known as yarn bombing, which is where you secretly knit around outdoor objects, so you could cover a tree or a rail with knitting. There is also extreme knitting, which is knitting in odd places. One Susie Hewer, aged 55 at the time of recording, has the world record for knitting a scarf while running a marathon, has also crocheted while running a marathon, and ridden a tandem while knitting, all to raise money for Alzheimer's research.

- XL Tangent: The woollen pompoms decorating trees in Leicester have embarrassed the local police so much that they forbid QI from showing any photographs of them.

- Tangent: Alan did a half marathon as a student to raise money to stage a Fringe show. He only raised £70. He was later given £2,000 by his student's union to top it up.

- The biggest knitted object in the world is a series of islands on the Peruvian side of Lake Titicaca. There are 45 islands made out of totora reeds. There are various buildings on these islands include houses and a church. People live on the islands and get used to the rather springy surface, but when they go onto dry land they have great difficulty walking normally. Lake Titicaca is the highest navigable lake in the world.

- The panel are shown a picture of five insects and their names and have to match each one. The insects are all katydids, so call because the sound they make sounds like "katydid, katydidn't". The insects are the dragon-headed, spike headed, horned, mimicking snout-nosed and the small hooded katydids. The small hooded katydid was not discovered until 2010 because the camouflage is so good, despite being very common in Australia. Another katydid, the male Tuberous bush cricket, has the largest testicles for their weight of any animal. They make up 14% of their mass, and they fertilise the female by inserting a jelly-like package called a "spermatophore" into the female. The back end of the spermatophore is often too large, so the female leans back and eats it.

- Tangent: The male ninja slug removes his genitals and throws it at the female, which them catches the genitals and uses it to fertilise themselves.

- The royal knackers were the people in charge of the knackers yards to the British royal family. These were the people who render down the dead horses of the royals. One royal knacker, John Atcheler, had the royal warrant to knacker Queen Victoria's horses. He had two knacker's yards: one in Sharp's Alley near Smithfield and the other near Kings Cross at Belle Isle. They had huge copper vats that rendered the horses and the vats gave off an awful smell. An extract from Bentley's Miscellany written in 1844 reads: "The knacker's cart arrives in double quick, the mob admires the cart, the royal arms and the inscription: 'Knacker to Her Majesty.' The royal knacker, a swell knacker in cords and tops with a bit of butchers apron, just as big as a bishop's, merely to distinguish his profession, pole-axe in hand, descends from his vehicle." Atcheler dealt with 26,000 horses a year.

- XL Tangent: Football clubs used horse oil to lubricate their boots, while cricket teams rubbed into their bats, like they do with linseed oil. Doctors use neatsfoot oil to massage a patient's joints after coming out of plaster. Horse bones were sent to knife manufacturers to make handles.

- XL Tangent: Alan once fed horsemeat to a lion for a documentary in Namibia. He was at a place which rehabilitated big cats for the wild. This place had three lions, which Alan describes as looking like Clarence the boss-eyed lion from Daktari. If a horse died anywhere from within a 300 mile radius they tried to get hold of the meat. It was fed to the lions by putting the meat into a metal bowl, lifting a bit of the fence and pushing the bowl through. Lion tongues have barbs on them so they can pick up horsemeat with just the tongue.

- If someone from Leeds told you to eat kicker then they would be offering you horsemeat. Yorkshire was the last place in Britain to eat horse on a large scale (at least deliberately). It was popular all the way through the first millennium, but then Pope Gregory III declared it too pagan. However, the Scandinavians like horsemeat and the place with the greatest Scandinavian presence in Britain was Yorkshire, so there was a market for it until the 1930s. The last Yorkshire butcher to sell it was Arnold Drury of Doncaster, who died in 1951 and advertised "Viande cheval, of super quality horseflesh." Rural Yorkshiremen who moved to the city were called "kicker eaters".

- XL Tangent: Sue claims that horsemeat is very lean and has no fat on it. She says it is like eating wall insulation.

- Tangent: Stephen expresses the oddity that we will rebel against something we are not used to, like drinking horse milk instead of cow milk. Alan's sister-in-law once left some breast milk in her fridge and her brother drank it. David once ate breast milk ice cream for a TV programme and claims it tastes just the same as normal ice cream.

- XL: The world's oldest mattress is 39,000 years old and in KwaZulu-Natal. It is in a cave and made out of rushes and reeds. Top layers of insect-repelling plants were added to stop people getting bitten during the night.

- XL Tangent: Head lice and pubic lice are totally unrelated species. Pubic lice numbers are in decline because of waxing treatments such as the Brazilian. Public lice are related to lice that live on gorillas.

- XL: The oldest profession is flint-knapping. It dates back to the homo habilis, or handyman humans. However you could argue that hunting is an older profession (Forfeit: Prostitution)

- XL Tangent: Stephen asks if there is a word meaning "prostitution" that begins with a silent K. Sue suggests "knob-gobbler".

- If you are handling roses you need to the be careful not hurt yourself on the prickles. A thorn is the modified branches of stems, whereas a prickle is part of a plant's skin. Thus the Bon Jovi song "Every Rose Has A Thorn" is completely wrong. (Forfeit: Thorns)

- The panel are shown a pub sign for a pub called "Ye Olde Rose & Crown", with a picture of a rose and crown in it, and are asked if there is a thorn in it. There is one thorn because Old English had a letter called "thorn" which is pronounced "th" and looks like "y", so the "ye" is pronounced "the". (Forfeit: No)

- Knick-Knack Experiment - Stephen and Alan make a cloud. Stephen takes a plastic bottle containing alcohol, and Alan pumps the bottle full of air, keeping the bottle sealed. When the seal is removed a cloud is almost instantly formed. If you pump the bottle with more air, the cloud vanishes, but one you remove the seal the cloud reappears.

The panellists are tied together and try to get free.