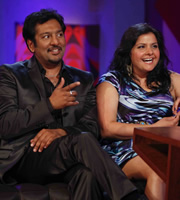 Rapper LL Cool J explains how he came to blows with actor Jamie Foxx: "He decided he wanted to test my chin... [now] we're friends, he's over it"; and talks about the excesses of his wild days: "I was never addicted to anything... my thing was bling, cars... ten cars in front of my grandmother's house, just ridiculous!"

He also says he loves London but won't go to Madame Tussaud's: "I see enough of wax celebrities at parties."

Eminem describes LL Cool J as his biggest influence: "Hearing him made me want to rap, that's what did it for me."; and says he won't ever stop: "Maybe I'll be a sixty or seventy-year-old rapper."

He also hints that he may return to the UK to perform: "I'm taking it as it comes, I certainly wouldn't rule it out."

Tennis star Andy Roddick admits he didn't think he would lose Wimbledon last year: "I thought I had it there... [but] Roger Federer is the greatest who's ever played the game."

He gives himself three more years to win: "For sure I'll play through to three more years, the London Olympics, then see how I am then"; but says he's looking forward to having a family after he finishes playing: "If it happened any sooner it would be a surprise."

"It's a delicate subject, you want to get it right... the Muslim community have been really good about it." (Nitin)

"I couldn't believe I was going to play a homophobe." (Nina)

The pair also say how they get big reaction from fans:

"I get a lot of sympathetic pats on the back and marriage proposals." (Nitin)

"People cross over to the other side of the road!" (Nina)

They also speculate about future of the Vic after Barbara Windsor's departure: