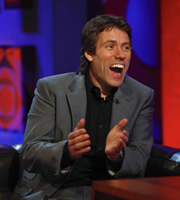 In a candid interview Hollywood actor Jeff Bridges says he's lucky he survived drugs in the past: "I do draw on those experiences... I think about what I did to myself, terrible, I'm lucky to be alive."

And tells Jonathan that he's about to step into John Wayne's shoes in remake of True Grit.

Westlife reveal how they thought they'd split up after Brian left: "When Brian left we wondered, thought we'd slowly fall apart, Brian would be the Robbie'." (Mark)

"Managing to survive brought us closer together." (Nicky)

They are surprised they've lasted so long: "We thought we'd have four or five years, so twelve is a result." (Shane)

And are proud of their reputation: "We see so many people who've lost the plot, we haven't fallen into that trap." (Nicky)

The group also reveal that Kian is the big drinker: "He bites everybody - he bit my ear and nearly took the lobe off." (Mark)

Finally, they also explain that Simon Cowell chooses their singles and is still happy to criticise; and that devoted fans always track them down, even on Christmas Day.

Comedian John Bishop explains how the prospect of a marriage split drove him to comedy, and stand-up brought them back together: "It was like counselling with people laughing at you."

Courtney Love says she wants to perform with Westlife: "If we join forces we could rule the world."

And says she won't be alone for Valentine's... that she has a "buddy" who services her needs.

John Bishop talks of getting old