Joining Jonathan in the studio are John Barrowman, Bollywood king Shahrukh Khan, and the queen of breakfast TV, Lorraine Kelly. 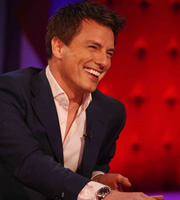 John Barrowman says he is looking forward to his new role in Desperate Housewives but hasn't said goodbye to Torchwood: "I love playing Captain Jack... I have no clue what's going to happen... I would go back in a second."

Lorraine Kelly says you shouldn't diet: "I don't think you should ever say, 'I'm not eating chocolate'." And she thinks parents could prevent child obesity: "Mothers have a huge responsibility. If your kids see you dieting, they're going to think that's normal behaviour. Don't go overboard."

Shahrukh Khan tells Jonathan he turned down Slumdog Millionaire because he's a real-life Millionaire host in India: "I was very keen for that film to be made... I didn't do it because the host was a bit of a cheat, and I thought people might think I'd do the same thing!"

He refuses to kiss on screen: "Personally I'm awkward kissing on screen so I don't do it... there's no private moment on the set." But he loves his fame: "I've worked very hard to be recognised so I never go out in disguise."

Shahrukh's biggest ambition is to co-star with Jackie Chan. And he says he has autographed his body-scan print-outs for fans at Heathrow Security.