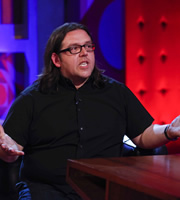 Alexandra Burke says she nearly gave up on stardom after being rejected by X Factor judge Louis Walsh: "I was really upset, I wanted to give up music.

"I had no interest in going back - my mum forced me."

But she gained confidence as the talent contest went on. "When you get to the final you're fighting more. I didn't think I was going to win."

On her relationship with Simon Cowell she says: "He lets me make my own decisions... He said don't have tattoos [so] I did, three times."

And on Cheryl Cole, Alexandra says: "We have a great relationship, she's really supportive."

Hot Fuzz star Nick Frost says he proposed twice to his wife and was rejected both times. Then she asked him: "I said I want to be wooed [so] she got down on one knee!"

On their wedding cake they had figures of a bride - and a gorilla. And Nick says he grew a moustache "because it upset my wife!"

Warwick Davis, Professor Flitwick in the Harry Potter films, says he wants to have his own chat show: "I'd call it Small Talk!"

And he reveals that the new Ricky Gervais/Stephen Merchant sitcom Life's Too Short is based on his life and that they'll all play themselves:
"We look ridiculous walking down the street together - like the evolution of man!"