If you struggled with the three Rs at school, spare a thought for Rossy tonight when he introduces Russell, Reginald and Rascal. For the ladies, there's some male eye candy in the apparently lovely shape of David Gandy. 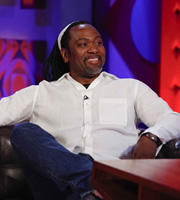 Russell Crowe admits it was hard to get into shape because of Gladiator injuries: "a big ask to get in to that level of training again," and tells Jonathan how he partied all night with his wife to celebrate Hollywood Walk of Fame: "We were still outside with a vodka at seven in the morning... that's why I married the girl."

He reveals Robin Hood is the first of his films he's shown his children, but that he didn't get a positive response - they said: "can we go home now, dad?"

He also confirms he's committed to a Robin Hood sequel and that he wants a follow-up to Master & Commander, saying: "I'd certainly do that character again."

Dizzee Rascal says he was delighted to be voted choice for black James Bond and reveals he wrote off a police car straight after passing his test: "My first crash, and it's the police... I haven't crashed since!"

He says he's still single and playing the field but wants a family: "Just testing the waters, I've been known to play around a bit... I want kids, I want all that."

Supermodel David Gandy says celebrities like David Beckham should stick to their day jobs and that he found it tough to be accepted as a model: "I was laughed off for the first couple of years, I was told I was too good-looking," adding "it was all androgynous, skinny, [they] resembled women more than guys."

He also admits he was overweight when he was younger: "I was quite chubby when I was 15, I loved a pie," and says he wants to stay at the top: "I changed the industry and younger guys are coming in, so I'm trying to kick them out!"

Comedian Reginald D. Hunter tells Jonathan that he trained at RADA but wasn't taken seriously as an actor: "I went to auditions and they said we're not doing Othello this year."

He also says he likes Britain "because of debate, [and] people love being smart," and that he loves laid-back Australia, which is "like a white Jamaica."