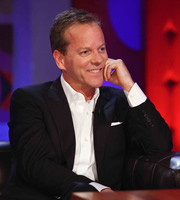 Actor Kiefer Sutherland talks candidly about voluntarily going to jail for drink-driving: "I made a really stupid mistake, I put a lot of things in jeopardy."

He reveals he had never spent 24 hours alone before: "It was awful, I was in solitary for a long time. It's not a place you want to be. I was so cross with myself, it was my way of teaching myself a lesson."

He tells Jonathan that he was overcome with emotion at the end of filming 24: "I went to say a few words to the crew and lost my voice - much more difficult than I'd thought. I never thought it would go beyond one season, and now I get called Jack more than my real name. I'm looking forward to 24 - The Movie."

Kiefer also hints that Jack Bauer loses it in the end: "He's mad, it's a personal thing... he goes out in a serious blaze of glory... you see a lot of emotion - basically him coming apart."

Actress Gemma Arterton, meanwhile, joins Jonathan and reveals that she was born with two extra fingers and thinks her children will be, too.

"I'm very proud of it because it makes me unique," she says. "Hopefully, my children will have [them]. I'll be quite disappointed if not! Gemma also shows Jonathan the wing tattoo she has behind her ear, which she had done as a memento of Tess Of The D'Urbervilles.

Finally, The Wire actor Idris Elba tells Jonathan how he tore his achilles playing football, and reveals that his first acting job was in Crimewatch. "It was horrible," he says.

He tells how he's glad he's not single as "it's tough dating in America". Idris also says that he loved his past career as a pirate radio DJ and never got caught. He admires his good friend Jay Z: "He's a really humble guy," says Idris.