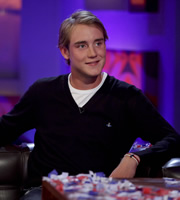 He says he wants to cook for the Obamas: "I got asked by Michelle Obama to go out and see them, I was washing-up, maybe one day I'll cook for them." And he tells Jonathan he blindfolds his daughter, Daisy, to test her on the 25 herbs in their garden. Jamie also confirms he wants to appear on BBC One's Who Do You Think You Are? to explore his Sudanese roots.

Ashes hero Stuart Broad reveals the celebration party was all a blur: "I woke up next day still in my whites." He says he hero worships Freddie Flintoff: "He knows how to enjoy himself." And says England are on a winning streak: "We'll definitely win the Ashes again - make the Aussies fear us."

Stuart also says England players are kept in a news black-out: "The media build things up... we focus on what's important, we don't have the papers because it can't do us any good."

Ricky Gervais says success was an accident: "I was the least ambitious man ever and now I've become a workaholic. I started late and now I feel guilty." He says Cemetery Junction, his first film with Stephen Merchant, is "our Saturday Night Fever". And he refuses to film sex scenes: "I'd be horrified."

Mika performed We Are Golden.