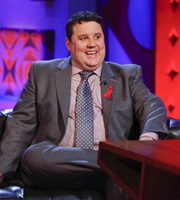 Peter Kay tells Jonathan that he's scared of returning to stand-up: "It's been seven years, it's still terrifying, you can't hide." He also talks about his next project, a remake of Die Hard called Die Well Hard: "I'm deadly serious. I really want to make it, exactly the same."

Jonathan is also joined by Jeremy Clarkson, who admits he got breathalysed while filming Top Gear: "We were filming last week, I had a small car crash... the police said we have to breathalyse you. The cameras were on; I thought 'what if...', but I was completely fine." He also says that he is a cautious driver: "I'm a dawdler, I haven't been stopped for years."

And actor Laurence Fishburne admits he's very squeamish and that gory scenes make him sick and says that CSI had to change as it was too real: "They discovered criminals were watching the show, using what they saw to get away with crime."