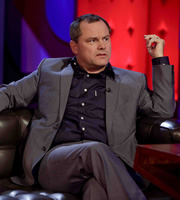 Setting the Strictly record straight, Alesha Dixon reveals that she didn't know Arlene Phillips was out: "I knew nothing, I found out when everyone else did. I was as surprised as everyone else but I took all the flak for it."

She also denies Arlene was a victim of ageism: "Personally I don't think it's about ageism, I think that's a load of rubbish." Although she thought she might not be accepted - "I was worried the judges wouldn't warm towards me" - she's emerged stronger since the press scruitiny: "I thought I'm not going to let the media ruin my experience. It's made me stronger. My life has never been smooth; it's made me more determined, focused... I'm a fighter, I believe you have to rise above negativity."

She says she fancies Ricky Groves to go the distance: "You want people who make you want to get up and join in." And she admits she isn't surprised contestants have affairs: "It gets flirtatious, it doesn't surprise me."

Jonathan is also joined by Jack Dee, who says he swam the equivalent of the Channel while he was writing his autobiography.

And actor Vince Vaughn says his 6'5 physique held him back in Hollywood: "You start to get a complex, never put on your shoes." He also confirms he's engaged and is due to marry "sooner rather than later."