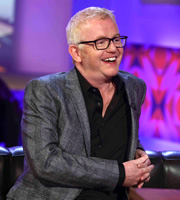 Chris Evans - BBC Radio 2's new breakfast host - joins Jonathan Ross. In an extraordinarily candid interview Chris says he can't wait to take over from Terry Wogan and won't fail: "There was no fear, I said yes straight away. What happened at Radio 1 will never happen again, I will never get to that point."

He says he was out of control at Radio 1: "I was so messed up, I was crazy. I've always been tricky to work with, but I stopped delivering, I'd run out of ideas... I lost control of the whole situation. Someone should have come up and said you're out of order... but I can't blame anyone."

He said he had no qualms about borrowing £85m and playing hard: "It wasn't a gamble, I was living my dream... I just forgot where I was, we were rock 'n' roll, I thought we were real."

But Chris Evans says he is nervous at being back on TV: "I never thought I'd do anything like this again, I was nervous about coming on in case I got crazy."

Boy band JLS are also among the show's guests. They reveal they've lost their MOBO awards and confirm their tour in 2010.