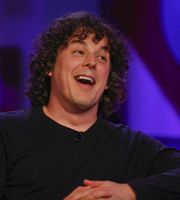 Barry Manilow says he didn't want fame: "I didn't want to be a performer, I hated it." And he didn't enjoy success: "My life changed overnight, everything went upside down, I was on Mars for the first three years, it happened so quickly... I can't imagine what it does to you now."

He says the British fans are the best in the world: "When they love you here they love you forever." Barry says he hated Elvis - "Elvis wasn't rock 'n' roll... wasn't my thing" - and doesn't like pop - "I force myself to listen to pop." But says Jonathan has the "big nose" to play him in a forthcoming bio-pic.

Eva Mendes reveals she dreams of appearing in a Mike Leigh film: "I wrote to him, I always write to people I want to work with." And she can make herself ugly: "I'm unconventional, I can make myself not as cute - play it up or play it down." She started in music videos but quit when asked to play a "ho".

Alan Davies says of Big Brother: "I stopped watching... I didn't like it when they put raging lunatics in there." He owns the original diary chair and says he might put it on eBay. And he announces a new Jonathan Creek special for next year.