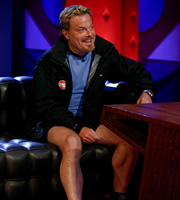 In an astonishingly frank interview Peter Andre talks candidly about the break-up. He says he still loves Katie: "I will always love the mother of my children and I will never hate her." Peter says he knows she still loves him but despite press rumours of a reunion: "It will never happen."

And he says he will never spill the beans: "I hope I never have to say a word. I don't want to explain the reason. I'm a very loyal person, I'm not crazy." He regrets going so public: "It's a soap opera, a lot of those headlines are made up... but I blame myself because you allow these things to happen."

And says they were both to blame: "I wouldn't want to put the blame on her, that's unfair, it is what it is, it worked while we were together." He's getting his life back: "I'm in as good a place as I could be right now, the kids are perfect, I'm getting there." And Peter says public support kept him sane: "They've done it for me."

Supermodel Eva Herzigova reveals the bitchy reality of being a top model: "It was like a rat pack - not nice - they made me feel like I was a beginner." And she confirms she wants more children: "I'd love two more, I need it because I'm so in love with him [son George]."

Sir David Attenborough talks about his new BBC One series Life which starts this autumn.