Jonathan Ross is joined by deadpan master Jimmy Carr, and big-hitting Serena Williams. Plus, with an exclusive interview, the show sees the return of Robbie Williams, who, in a Friday Night with Jonathan Ross first, performs two tracks on the show and a further three for red button viewers. 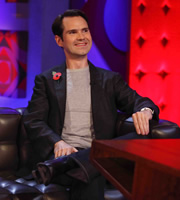 In an extraordinarily frank interview Robbie Williams says nerves did for him on The X Factor. "The doors got stuck, I thought what are the words... I get incredibly nervous... it wasn't drugs or drink, just deer in the headlights," he says.

He reveals the pressures that made him quit performing live: "The decision was made for me, I've always been very nervous... 80,000 people, it's an unnatural thing to do. You don't know what's going on in my head. It's traumatic, really scary. I ended up in rehab again, it was 'what are you doing to yourself?' I thought it's time to break the cycle."

Robbie says he knows he'll stay sober: "I've taken the pressure off myself, it's a part-time gig these days. The missus keeps me grounded. There's no need to take myself out of my mind any more." He says he wants a family in the next two years and he's in love: "I thought I was going to be a bachelor... I was introduced to Ayda and things just changed. She's a wonderful person and I'm in love. She's really broody and I'm getting there."

And he reveals he'll be performing with Take That again: "We've got together, done bits and bobs. I can't say much, but yes, I hope so."

Robbie Williams performs a mini-gig - his new single You Know Me, one of his biggest hits Feel, plus a further three tracks for red button viewers.

Jimmy Carr responds to the uproar caused by his remarks about servicemen amputees: "I felt awful about it... I've dropped it. There are things you can do on-stage that you can't do on TV. When you take it out of context it seems incredibly harsh."

Wimbledon champion Serena Williams says complaining at the US Open showed she's human, and that she was right. "I don't think the call was correct. That was frustrating. My reaction was 200% wrong but it showed a lot of people I'm human. Everyone makes mistakes but it's important to move on from it," she says.

Robbie Williams performed You Know Me and Feel.