Jonathan Ross is joined by broadcaster Graham Norton, actor Verne Troyer and comedy double act Armstrong and Miller. There is also chat and a performance from Latin American singer Shakira. 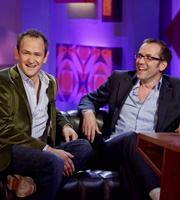 Graham Norton says he wants Liza Minnelli for a judge on BBC One's The Wizard of Oz. He looks forward to his new BBC One chat show: "I'm aware it's seen as a promotion but the show will be exactly the same."

Shakira says she's been in therapy: "We all have a part that we hide from the world." And she won't watch her own performances: "I never like anything I do." Shakira performs She Wolf for the first time on British TV.

Verne Troyer says a fourth Austin Powers movie may be on the cards, is a regular at the Playboy Mansion, and found it hard to carry on after the death of Heath Ledger. He says: "It was a great honour for me to be part of that film... it was hard to go to work." And he has a heart tattoo in Heath's memory.