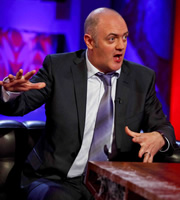 Dominic Cooper reveals making Mamma Mia was chaos: "It was kind of intimidating... we all had no idea what we were doing." He thinks there should be a sequel.

He says it's mayhem at home with flatmate James Corden: "He's good on paper, starts cleaning things, (but) he just doesn't do anything." The neighbours want them out: "We've got two drum kits, play them at five in the morning... I'm putting a stop to it now, we need to move!"

Christopher Walken acknowledges his hair is the most famous thing about him: "I've had my ups and downs but my hair has always been famous." Without it he would wear a wig.

Dara O'Briain says he nearly injured Griff Rhys Jones fencing in the new series of Three Men In A Boat.