The final show of the series includes exclusive interviews with - in a rare TV appearance - that most English of movie stars, Hugh Grant; and our most successful comedy export, Eddie Izzard. Plus, there's an interview with Rihanna, who will also be performing live in the studio. 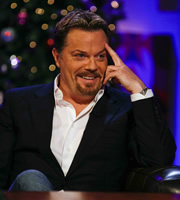 Rihanna says she broke her silence about the attack for her fans' sake: "It needed to be said because young girls look up to me... people are scared to talk about it. It can happen to anyone, that's the reason I talked about it. Now I just sing about it, I re-live it." She says the worst thing was the media scutiny: "That was the thing that made it hardest for me."

Hugh Grant tells Jonathan that he only has himself to blame for still being single: "I should settle down. It's all my fault, I've had some lovely girlfriends."

And he reveals that his recent co-star, Sarah Jessica-Parker eats like a locust: "She's full of surprises. She eats a lot... whatever you put in front of her is gone in five seconds." He also confesses that he dreads turning 50: "I don't know how to cope with it."

Finally, Eddie Izzard suggests that he might enter politics at some stage: "I want to do that, I've always been a political animal. I'm very positive about Europe, we have to learn to work together." He also says that he wants Britain to get fit for 2012: "Everyone should be doing more exercise coming up to the Olympics. Just get out there."