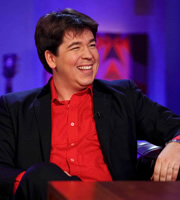 Sarah Harding tells Jonathan that Girls Aloud will get back together but they don't know when: "We're simply taking a break, we all felt it was time... we said about a year, but we're going to see." She was sure they wouldn't last: "We've grown up in the spotlight, we never thought we'd stick around."

Sarah thinks Jedward are the best thing about The X Factor: "I'm loving the controversy... they're definitely the most entertaining, that's what's keeping it interesting." She says her hell-raising days are over: "When I was a lot younger I was probably going through a hard time... A lot of stuff is misconstrued, I love to go out and have fun but I'm at my most comfortable when I'm at home, don't have to care what I look like."

And looks forward to her future acting career: "I'm not saying I don't want to sing any more but everyone knows I'm a bit of a drama queen, I really enjoy a new challenge... this is what I want to do."

WBA World Heavyweight Champion David Haye says victory was his destiny: "I've been training my whole life for this one night. I knew I was up against it... I just had to focus on strategy, to stick to my game plan, ignore the fact that he was a giant."

He says he broke his hand because of Valuev's extra thick skull: "It was like hitting a brick wall... When you've got the whole of Britain watching, you can't complain about your pain."

Michael McIntyre says he can't believe his success: "I've been dreaming of this happening. Two years ago I had nothing." He says he's only just bought his first house.

And Gerard Butler reveals drinking got him the sack from his legal career: "One week before qualifying as a lawyer I lost my job. In two years I had 32 days off and 25 of those were Mondays."