For the penultimate show of the series, Jonathan is joined by Formula One World Champion Jenson Button, Sir Terry Wogan and tennis legend Andre Agassi. Plus there's music from N-Dubz. 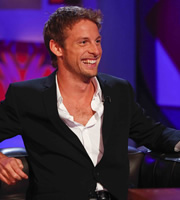 Sir Terry, who retires from the BBC Radio 2 breakfast show this month, says: "My heart says stay, my head says go. There's never a good time to go but there's a right time to go." He is dreading his last breakfast show on Friday 18 December: "It'll be emotional, a wrench, my whole life is going to change but it's about time." And says about TV: "I don't think I ever want to do something on a daily basis again, that's beyond me now."

Formula One World Champion Jenson Button tells Jonathan he is looking forward to rivalry with his new teammate Lewis Hamilton: "It's a massive challenge for me racing against Lewis but that's the challenge I want." Jenson says he won't let his girlfriend drive him: "I'm not the best passenger. My girlfriend passed her driving test last year but she hasn't driven a car since."

Andre Agassi says hatred of tennis scholl forced him to win: "Tennis school was more like a glorified prison camp, like Lord Of The Flies with forehands. The only way to get out was to succeed." He says of Wimbledon: "Wimbledon scared me... they made you feel like a stranger in your own tournament."

He also tells Jonathan how he used hair clips to hold his wig on at the French Open: "I was praying for a result that day... for my hair to stay on!"

And Andre says he rates Roger Federer as the greatest of all time: "Playing Federer I go into a panic mode from the word go... the greatest player I ever played against."

N-Dubz performed Shoulda Put Something On.