One of the biggest and best-loved superstars in the world, Barbra Streisand, gives her first British TV interview this century. 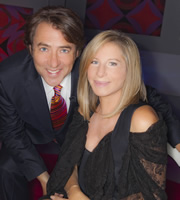 Barbra Streisand gives her first British TV interview this century, in this unique edition of Jonathan's BBC One Friday night talk show, Friday Night With Streisand And Ross, which is entirely devoted to a celebration of her legendary life as a performing icon.

As well as discussing her extraordinary career as a double Oscar-winning artist, actress of stage and screen, concert performer, film director, movie producer, screenwriter, songwriter and best album-selling female recording artist ever, Streisand performs live in the studio intimate material from her eagerly-awaited new album Love Is The Answer as well as one of her all-time classic hits.

She reveals she wanted Elvis for A Star Is Born: "He is actually the person, it could have been about him." Is unhappy performing live: "When you can't see [the audience] I can go into my own little world [but] if you see them it's so distracting. I haven't sung since I made the album [in January], I'm lazy!"

Has a low-key lifestyle: "I'm a stay-at-home kind of gal, a homebody... he's [husband James Brolin] messy and I'm very tidy... I've been telling him for 13 years but he doesn't listen to me!"

Has plans for an autobiography and bio-pic: "You never know the truth until you write it yourself and then my fear is they won't believe me!"

Injured herself giving Robert de Niro a massage in Meet The Fockers: "He kept saying do it harder - I sprained both thumbs, had to have cortisone shots. That's method acting!"

Dislikes the media: "The press gets everything out of whack... it gets too much... the truth wins out eventually... I'm much more at ease now, I don't get upset by lies any more."

And she loves English food: "I'd like to start the day off with bangers... then tea with scones, mashed strawberries and clotted cream."

Barbra Streisand performed In The Wee Small Hours Of The Morning and If You Go Away.