Despite not being associated with Addison Cresswell, comedian Ross Noble manages to find himself a space on the Ross sofa this week. There's room too for professional potato-based snack salesman Gary Lineker and Mary Portas, the Queen of Shops. Music from badly drawn boys Gorillaz.
Preview clip 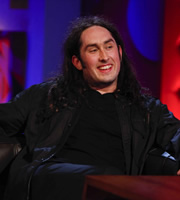 He explains his stance over Triesman and believes England's bid for 2018 World Cup will survive controversy, saying: "It's quite damaging to the bid, so as an ambassador [to the bid] I thought I had to stand down [from the Mail on Sunday]... we have to focus on the strength of the bid."

He also believes Wayne Rooney is essential to England hopes for 2010: "Our chances would diminish drastically [without him]... he loves being the main man. We really need him fit..." - and thinks England's biggest challenge will be from Spain and Brazil.

He also rules himself out of ever being England manager: "No. It's such a difficult task," and misses the game but won't ever play again, "I miss the big moment, that's the big buzz you can't replace, [but] I'd be useless. I can't run any more... all I relied on was my speed."