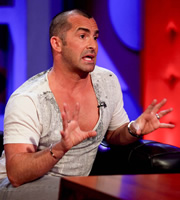 Gwyneth Paltrow, Demi Moore and Robert Downey Jr talk to Jonathan Ross via satellite, whilst Jeremy Clarkson and Louis Spence are in the studio, for this week's Friday Night With Jonathan Ross on BBC One. 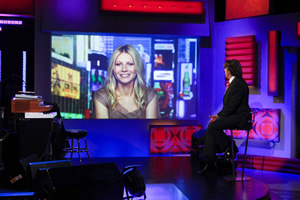 Gwyneth Paltrow says she'd been waiting for a call after last being on the show and denies Coldplay will leave the UK "any time soon."

She also says she wants more action and a tight costume for Iron Man 3: "I'm ready to kick some people!" and jokes she wishes she had Louis Spence's cleavage.

Robert Downey Jr admits he "sometimes" misses the wild days and confirms he's committed to Iron Man 3 and a sequel to Sherlock Holmes: "I feel like an honorary Brit after playing Sherlock Holmes."

Demi Moore explains the secret to sharing life with Ashton and Bruce: "The most important thing is to make your kids your priority, so it becomes very easy," and tells how she's planning Twitter revenge on Ashton Kutchner (for posting her knickers pic): "I'm laying in wait to get him."

She also admits that she hates working out: "I do as little as I possibly can to get by," and explains how she was sent back to work by her family after a six-year break: "My kids started saying 'when are you going to work again?'"

Top Gear presenter Jeremy Clarkson thinks Euro flying ban was a mistake: "I did some research into it, it was nonsense," and tells Jonathan how the Top Gear team once got caught in a volcano eruption: "We thought it would be good fun to drive over it."

He also explains how he woke up on 50th birthday with "a terrible skin disease," and that he doesn't want to offend people since turning 50: "I genuinely and honestly think I hope I didn't upset them."

Lastly, Louis Spence explains that wants to be a dad but doesn't have enough money; that he had botox "because my mum wanted it," and that he was born with a lisp, made worse by a bad childhood accident: "My teeth went through my tongue, nearly bit my tongue off... they put an ice pack on it, and that was it!"

He also says that he thinks Jonathan looks better than Clarkson: "He's a Ford Fiesta, you're a Ferrari!"

There is also music from Paul Weller.

This episode is slightly later in the schedule due to a party political broadcast. Demi Moore, Robert Downey Jr and Gwyneth Paltrow were due to appear on this show in person but got stuck in America due to a volcanic ash cloud grounding flights.