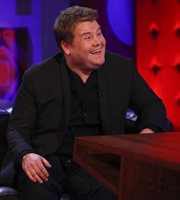 Charlotte Church shows off her svelte new figure and says: "I don't think I've ever been this thin... I haven't exercised, I just don't eat as much... I've got a great fella who's not obsessed with my weight."

She also says that she's astonished at the quality of contestants in Over The Rainbow: "I didn't quite realise how serious it would be... some of the voices were really awesome."

And she reveals that she'll return to performing: "I've grown up a bit now, I've got a lot more to say, a little bit kooky, different to anything I've done before" - and that her partner Gavin will return to rugby: "He'll start training again soon, he's exactly the same weight as when he finished."

Ahead of Sport Relief, James Corden reveals that he tried to play it cool at dinner with David Beckham: "I just kept thinking you're the most beautiful man I've ever seen."

He also asked Andy Murray why he always picks three balls up and throws one away: "He said 'I don't know, I just do it 'cos everyone else does'."

And he tells Jonathan that he's a big fan of the new Doctor Who, Matt Smith, and that he's playing a part in the new series: "He's brilliant, I think people are going to really love him."

Finally, Olympic gold medallist Amy Williams reveals she had no idea she'd won: "I didn't know I'd won, I had to ask my coach, I was a bit shy, didn't know what to do."

She also confirms she'll be defending her title in Russia in 2014.

Plan B performed She Said.

Cheryl Cole was originally due to appear in this episode.