If you are of the Mail persuasion, the sight of Frankie Boyle and Jonathan Ross together may well convince you that decent society has collapsed. It hasn't and Katherine Heigl should provide reassurance. Music from (not David) Diddy.
Preview clip 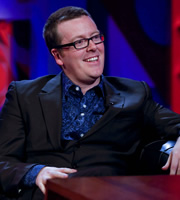 Diddy talks candidly about his private life (he has six children with three different partners): "Opportunity wasn't knocking at my door for marriage. I'm going to be more cautious in future. I'm not going to have any more kids until I get married."

Diddy also chats about how he wanted to be an athlete, but injury forced a career change. "Originally, I wanted to be a footballer ... music was my way to get over being depressed."

He tells Jonathan how poverty made him ambitious: "Being hungry, you learn to make money to eat. My father was a street hustler, that's why he was killed when I was younger ... I didn't want to follow in those footsteps."

He also explains why he's turned down action hero movies: "I got offered a lot of clichéd roles - I wanted to go more the independent route."

Diddy talks about the fact he only takes off two weeks a year: "I work hard and I play hard - I love to have a good time."

Actress Katherine Heigl confesses to Jonathan that she didn't live with her husband before marriage: "The first three to six months were pretty rough. I think it's hard to get used to the idea that person's going to be there all the time. I was clinging to my independence a little bit."

Katherine also admits that she was love-struck by her Killers co-stars: "Ashton Kutcher has a great body ... I got really blushy - I was actually fluttering my eyelashes a lot!" Referring to co-star Tom Selleck, she says: "I was remembering my crush on him from Friends."

She jokes how annoyed she was that Ashton appearing topless stole the limelight: "I have my shirt off in this movie, too - nobody mentions that!"

Comedian Frankie Boyle admits to Jonathan that he hates talent shows: "I find the whole thing of people getting fascinated by talent shows depressing."

Frankie reveals that he's leaving stand-up: "It's a bit unhealthy, looking for the approval of strangers ... but I've got family - I'd like to spend some time with them."

Frankie also tells Jonathan that he thought he was having a heart attack at a recent recording of Mock The Week, although it was a false alarm: "Turned out I had a 'torn man boob'. It was about as humiliating as it could possibly have been."

He also confirms he is writing his first sitcom.

Frankie Boyle explains why he doesn't like TV talent shows.