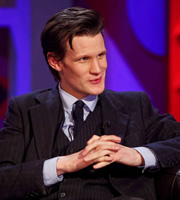 New Time Lord Matt Smith talks about becoming the Doctor: "My Doctor [is] clumsy, a little reckless, [but] becomes more assured as the series develops."

He also reveals: "I couldn't tell anyone for three months," and says: "To my mind it's the best part in British TV history."

He tells Jonathan that he took advice from David Tennant and that he's eager to take on his mantle: "I spoke to David briefly, he said 'enjoy the ride'."

On the TARDIS, he reveals there have been some changes: "It's bigger on the inside, has different levels, other rooms including a library, [and is] a different shade of blue outside."

Finally, he says he's here to stay: "I hope to do at least another year, it's a wonderful part and I want to keep it."

And there's an exclusive sneak preview of the Doctor's encounter with vampires.

Actress Emma Thompson reveals husband Greg Wise dated Kate Winslet on the set of Sense & Sensibility: "He was told you're going to meet your future partner... so he courted Kate for weeks, took her to Glastonbury. She didn't take to it because she's a mod and he's a hippy - it didn't work out so it turned out to be me!"

She says that Nanny McPhee is her homage to her father's classic children's creation, The Magic Roundabout, and that her daughter Gaia was an extra in the film but isn't interested in following in her footsteps: "She wants to be a waitress and an artist... acting as a job? So unimpressed!"

Lastly, scientist Professor Brian Cox (whose Wonders Of The Solar System can currently be seen on Sundays on BBC Two) reveals he failed Maths A level: "I got a D... I was really not very good... I found out you need to practise." He also believes children should enjoy science: "We need to get over [that] it's not that difficult."

Jonathan Ross has created a special version of the Hadron Collider for Brian Cox.

Jonathan gets to play with the Doctor's Sonic Screwdriver.