Chat and music with Jonathan Ross. Joining Jonathan in the studio are Sex and the City siren Kim Cattrall, indie rock giants Editors, the cast of Misfits and X Factor twins Jedward. 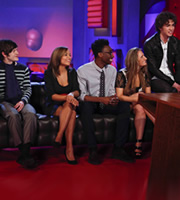 Edward, from Jedward, reveals the truth behind their name: "If I go solo I'll only have to rub off the J!" And says Simon Cowell's cruel comments made them a hit: "Simon saying we were bad made us unique."

They tell Jonathan they've only ever been apart for a day, their mother can't tell them apart and, despite their fame, they don't have girlfriends: "The girls at our shows are all our girlfriends." And they love fame: "We want to do everything, six months ago we couldn't hold a microphone."

Kim Cattrall tells Jonathan she hasn't seen Sex And The City 2 yet, but reveals there will be Sex And The City 3... and more. "We'll tell stories as long as they're there to tell," she says.

Also on this week's show, the cast of Misfits and music from Editors.