If you want an Australian to make you laugh, there are two options: the first is to watch Tim Minchin who joins Jonathan tonight. The other is to watch their cricket team trying to beat England - hours of hilarity! Elle Macpherson is also Australian and easier on the eye than Ricky Ponting. Robin Williams and Mark Ronson add a boomerang-free flavour to the proceedings.
Preview clip 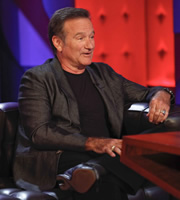 The Hollywood star talks to Jonathan about getting a bovine valve during his recent heart surgery: "I can't eat meat now because my heart says 'you're one of us...'" and reveals how he's a big fan of The Mighty Boosh, believes in aliens and once went shopping in a San Francisco sex shop dressed as Mrs. Doubtfire.

And on being so hirsute, he says that he volunteered to have a body shave for full frontal nude scene in new movie, World's Greatest Dad, and jokes that Coco the talking gorilla flirted with him: "The trainer said if she takes you out back I can't help you!"

Jonathan is also joined by Elle Macpherson, who explains that she wanted to be a lawyer and only started modelling to pay for books: "My mum encouraged me, she didn't want me getting married and staying at home."

She says that she didn't expect her modelling career to last: "I never thought I'd be working for thirty years... we just happened to be in the right place at the right time... the Eighties was a period of extravagance, there was a need for dynamic women."

She explains that she loves her nickname [The Body]: "It was a funny catch-phrase, then it kept going and going - I turned it into a business..." and thinks Britain is fashion capital of the world: "It's what New York used to be."

Finally, she reveals that her children say she doesn't know anything about fashion and that she sees Claudia Schiffer every day on the school run.

Tim Minchin sings a song about wanting to make love to Jonathan's wife.